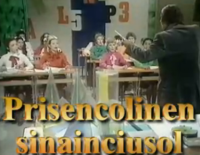 One of the time honoured methods of learning a new language is to buy a book you know well â written in your chosen new language. It used to be the bible â these days it is probably Harry Potter.

I learnt by buying reading books aimed at four year olds in French. They come with big pictures. The French are very keen on instilling a love of natural history and their glorious wilderness in their young. I might be shaky on the grammar at times, but I know my âbuseâ from my âÃ©pervierâ. Incredibly useful when you want to buy the proverbial train ticketâ¦â¦

Another well tested method is to sing along with Beyonceâ¦you will learn a strangely garbled language which will stand you in good stead if you find yourself being mugged by the local inhabitants in Peckham.

This piece of film was made 30 years ago, mocking the English that young Italians would learn by such a method. The Italian comedian, Adriano Celentano, imagined how pop music might look in 30 years time, compete with dance steps, if this learning method continued.

There is not a complete English phrase in the entire lyrics.

Iâd say he was spot on, wouldnât you?

They should enter this for next yearâs Eurovision Song Contest. Itâs got
Winnerorisencolinensinainciusolwinner written all over it.

One of the subsequent videos is the same thing again, but with
subtitles.

Keep your finger over âpauseâ because the words are fast and
unbelievable.

Livewire, Iâm pretty sure they are mocking a âcertain classâ of uber-cool
Italians spouting nonsense.

Nobody feels the need to mock England and the English any more, a brief
perusal of the daily mail shows that mockery would be wasted, English reality
is quite bizarre enough. (The same test could be applied to most modern
mannerisms in most countries). In my day, pierced and tattooed ladies were
circus exhibits, they are just as likely to be somebodies grandma these
days.

As for language, I am amazed that what started as a joke about inane,
slack-jawed, valley girls is now ubiquitous in most young femaleâs speech, I
refer to the word âlikeâ freely sprinkled in every sentence.

Mocking the English? Do they wish to go there? The Italian Book Of War
Heroes etc
The Sun still exists (just about) and does a nice line in pithy
xenophobic headlines if required.
Slightly O/T, and as thereâs now a topic
author on who probably knows the word âziziâ,
the Old French word that I
used has no vulgar overtones (important when discussing blog editorial
guidelines).

OMG the comedian/singer is a dead ringer for Delingpole!