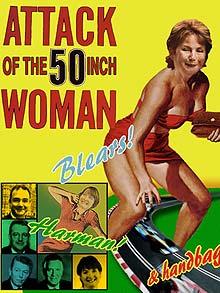 The three top English Language news websites in North America last month were the Huffington Post, The New York Post, and the Daily Mail Online, as reported by Roy Greenslade in the Guardian’s media blog.

The Huffington Post is coming to the UK to join the online tabloids, and is launching on July 6th:

Arianna Huffington today confirmed that her eponymous US news website will launch in the UK on 6 July, as part of ambitious plans to be in a dozen countries by the end of the year.

Speaking in Cannes this morning, the Huffington Post founder said the UK site would take the same format of the US version, which mixes original news reporting with legions of blogs.

“We’re launching in the UK on July 6,” Huffington said.

Legions of blogs, and – it seems – oodles of bodacious boobs ‘n’ bums in bikinis.

Bikinis in the News

In early May the Daily Quail blog, one of a number of blogs which focus on sensationalism in the media,  looked at blog ranked several national newspapers according to the number of mentions of “bikini” on their websites. The results were not very  surprising:

The Daily Mail dominate, and they have a two-track racy/censorious strategy online, which is more salacious than the Mail in print. We can look forward to the same online approach thing from the Huffington Post, which sets up a slight tension with some aspects of left-of-centre politics.

This, for example, is Kim Kardashian, not being at all sexually objectified:

As the HuffPo put it:

Lying on her back, oiled up and in bikini, Kardashian looks ready for summer.

So I reran the test including the HuffPo, and also a couple of newspapers missed by the Quail, using the uncensored version of Google search (i.e., safesearch=off), the “site” operator, and Google.co.uk. Here is an example for a search of the Daily Mail on bikini. I also did a search on “thong”, and another using the Google images search, which has been a significant traffic source for some time. I was not logged into my Google account at the time.

Here are the results for “bikini”, and also “thong”, in the Google  search.

I’ve excluded the Times, as these days Rupert Murdoch has locked his paper inside online Alcatraz.

Here are the results for “bikini”, and also “thong”, in the Google images search, a source of significant traffic.

Bear in mind that these figures can only ever be indicative, and that some newspapers deliver results from subsites, such as the Telegraph’s Fashion Shop.

There is one point that really stands out, and that is that the Huffington Post will ‘out Daily Mail’ the Daily  Mail, and comes with more bikinis than all the rest surveyed put together.

As I hinted at the top, newspapers also adjust their content mix and presentation online.

The Next Web has noted that the Mail’s rise to the top of the UK online newspaper pile has followed a blog-like strategy; and the site has done a more detailed review of the paper’s strategy under 5 headings:

The Huffington Post is a blog, and one of the things which they seem to be bringing is more exaggerated search engine targeting. Hear is Kim Kardashian again, in a not-particularly-extreme picture.

Yet it is named:

and with the first paragraph of the article consisted of overegged descriptions in category links:

And I trust that the site will be added to the Quail’s ‘naughty  list’.

Wow, is that picture from HuffPo an airbrushed shot of US liberal hate
figure Pam Geller, the bikini wearing, 50 year old owner of Atlas Shugs blog
who the liberals got in a Huff about because “50 year olds should not wear
bikinis”. It was of course an excuse for them to publish a pic of Pammy in her
bikini.

I was once accused at HuffPo of wanting to have sex with Sarah Palin
because I pointed out SP is actually a better speaker than Barack Obama on
account of she opens her mouth and pronounces words (Obie only pronounces
first person pronouns) so on the bikini story I was able to dredge this up and
say that while I was not interested in Mrs. Palin I would not pass up a chance
with Pam (who is a Facebook contact via a US site I contribute to) She saw the
funny side, people in the HuffPo thread didn’t. Just call me the boy who
kicked a hornets’ nest.

Who is this Kim person?

I’m surprised there were so many references to ‘bikini’ in The Sun. I
thought they didn’t usually bother much with them. Or any other item of
clothing, come to that.

Can’t think of any other reason to visit their websites, certainly wouldn’t
go there looking for unbiased news.

It’s not my fault I’m a dirty old man, I was born a heterosexual male, it’s
in me gens don’t you know.

What’s the problem? This is all brilliant!