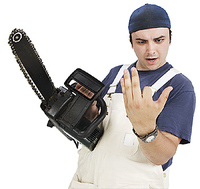 A SECURITY guard from South Yorkshire shot himself in the hand to try to remove a wart from his finger.

No point in aiming at his foot when the wart was on his finger, was there?

Sean Murphy, 38, lost most of his left middle finger after using the stolen 12-bore Beretta shotgun at a garden centre in Doncaster.

Does the name give us a clue? Not more Irishmen with guns?

But he said: “The best thing is that the wart has gone. It was giving me lot of trouble.”

Yes dear, but it was still attached to your finger when it took off  – but always look on the bright side of life.

Murphy, a security officer at Markham Grange Nurseries, Brodsworth, at the time of the incident in March, has since lost his job. He had suffered with the wart on the joint closest to the tip of his middle finger for more than five years.

Lost his job as well. Was it his trigger finger?

“I didn’t expect to lose my finger as well when I shot it but the gun recoiled and that was it. The wart was gone and so was most of my finger. There was nothing left, so no chance to re-attach it.”

He wanted to re-attach the wart? Surely not!

Police were called to Markham Grange Nurseries on the afternoon of March 13 to discover an injured man with a missing finger. He told them he had used a shotgun he had found in a hedge bottom near the nursery three months earlier. An investigation showed it was taken during a burglary in 2009 but Murphy said he had no knowledge of that.

Nor of safety catches, apparently.

Martin Ward, prosecuting, said: “On the afternoon in question he had some drink.”

How much drink does it take to summon up the courage to fire a gun at your wart? I suppose it depends on where the wart is, genital warts would take several bottles.

District Judge Jonathan Bennett told the defendant: “I don’t know what was going on in your mind.”

Murphy was also ordered to complete 100 hours of unpaid community work and pay costs of £100.

Anyone care to speculate on suitable ‘unpaid community work’ for this offence?

“Working in the rain, cutting up wood
didn’t do my little brother much
good,
lost two fingers in a chainsaw bite,
all he does now is drink
& fight.”

From ‘Country Life’, by the wonderful Steve Knightly of Show of Hands, for
those of you who may not have discovered their music.

Trivial I know, but the chain on the chain saw is much too loose. It will
come off as soon as cutting starts. Please adjust. And then shoot yourself in
the foot.

It should be off-limits for humour really, but I didn’t originate this one.
Seen on another blog, the favourite entry on a “Tweeted questions for Ed
Miliband” which he was unwise enough to try-
“@felicityparkes – Where did
Ed Balls touch you? Show us on the doll”

And I’ve STILL got it wrong! *verruca*

Sean Murphy, 38, lost most of his left middle finger after using the stolen
12-bore Beretta shotgun at a garden centre in Doncaster.
………….
that just
goes to show you the power of advertising…”Bazuka that veruca, Beretta that
wart”.

It might help if I could always spell verucca!

Nothing beats a Flit-Gun
For curing all your ills,
For
getting rid of beetles
Or mould on window cills;
If you’ve a
fungal toe-nail
Or something of that sort
Just squirt it with
your Flit-Gun
Then try it on your wart.

Granny said for warts, stick the finger in a spud
Warty laughed
it’s head off, and ate the spud as food (regional
pronunciation)
Big Pharma said here’s nitrate, just paint it on the
wart
The wart just grew and prospered, more tat that I’d just
bought
I learned of things metallic, as learned by Old Brunel
I
used an angle grinder, and sent the wart to hell

“You’ve WARTS?!” said Madame Arcati;
“Heve you been somewhahre
terribly dehrty?”
“Heve you prrrodded a ret
Or something lehke
thet?
If you hev, you’ll hev WARTS ’til you’re thehrty.”

“Oh, don’t be hoity-toity,
Miss Arcati, be a sport;
You can’t
stand there and tell me
You’ve never ‘ad a wart!
What with all
your nosey doin’s
And sleuthin’ and wot-not,
You must’ve picked
up sumfink
You rather you had not!
You must’ve poked at
fungus
And trapped some ‘neath your nail!
It lives there still,
all purple,
While the rest of you’s gone pale
And wan; so now
you’ll have to
Bite the bullet and ….
Aim Beretta at your
finger
And shoot off your whole hand!

There was a tale a few years ago of a Texan who was admitted to hospital
with severe leg injuries after he tried to shoot a spider that was crawling up
his leg.

I’m stumped for a suggestion

Garden centre stocktaker at Homebase. But he’d have to count the digitalis
plants in base nine, though..

What? with one of those pointy sticks to pick up rubbish with? He’d
decide to pluck his eyebrows with it and take off his left ear!

Don’t publish the poor chap’s address. He’ll be deluged with junkmail from
manufacturers of fingerless gloves.

Couldn’t he just go to hospital to get the wart removed like everyone
else?

I know the NHS’s reputation isn’t too good, but this seems a tad
extreme…

A good deal of community service is never completed so it maybe
academic.

Replacement for rats in medical testing?

You think he’d be able to grasp running round a hamster wheel?
Tricky!