It’s nice to know that apocalyptic language is still daily use in some circles: 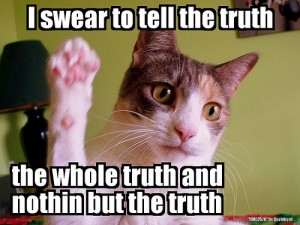 Washington Post, through Alexander and Jenkins, in a grossly irresponsible manner without due consideration for the standards of information gathering and dissemination ordinarily followed by responsible parties, in reckless disregard for the truth, undertook to defame and malign Rakofsky and RLF by maliciously publishing that Judge Jackson “allowed the defendant to fire his New York based attorney”. *

* (RLF is the Rakofsky Law Firm, not the Rabbit Liberation Front).

You might think this was George Galloway making a speech to his partner at the breakfast table, but it’s actually an extract from an American Law case which is known as Rakofsky vs the Internet, which I picked up via Charon QC.

The story is straightforward; a young – but old enough at 33 that you hope he should know better – New York lawyer called Joseph Rakofsky, made a bit of a mess of a murder case and the judge declared a mistrial:

A Washington, D.C., judge declared a mistrial in a murder case Friday, saying he was “astonished” at the performance of the defense lawyer who confessed to jurors he’d never tried a case before.

Judge William Jackson said lawyer Joseph Rakofsky did not have a good grasp of legal procedures, citing as an example the attorney’s rambling opening statement in which he told of his inexperience, the Washington Post reports. Rakofsky graduated from Touro law school in 2009 and obtained a law license in New Jersey less than a year ago, the story says.

The incident was then reported by a number of dozen legal bloggers (‘blawgers’) and a few newspaper/magazine websites, and Rakofsky has now decided to take legal action against the lot, in the terms quoted.

This has happened before on the Net, and is the internet equivalent of erecting a large sign pointing at yourself labelled “whompa”, rather than the more logical action of stopping digging and hiding in the bottom of the hole you just created.

We’ve heard a lot recently about US principles that we should adopt, such as an absolute right to Freedom of Speech; I’m not quite so keen on what sometimes could be an absolute Freedom to Sue.

Let me quote one of Charon’s commenters, “Hull“, on US legal practice.

Well done. First rate primer for your lot, CQC, on wasteful US “throw-shit-against-wall-see what-sticks” litigation. In many ways, a “normal” case. Worse, we have enough due process in civil cases to make everyone go broke.

The Trial Warrior blog has the whole incident, set in Biblical Times. The RAKOFSKYLYPSE is upon you.

Photo credit for the LOLCAT.

The legal submission, all 82 pages of it, is here.

“Attempts to stifle the Internet, with lawsuits or state action, are going
to be doomed to failure by weight of numbers.”

Well, Livewire, the EU has just introduced new cookie regulations which are
really going to mess things up.

I’ll Google it, if it’s a ‘need to opt-in’ law then I’ll give the EU a
rare moment of praise, as a passionate blocker of cookies. I still trust my
own individual effort to block, annihilate and vaporise them…

Yup, comes in to GB law tomorrow and it requires consent from a user
before cookies are used. After what I’ve said about the EU previously, a
one-off “well done Brussels!”
Anna may like to print that off and frame
it, I suspect it’ll be rarer than a first-edition Anglo Saxon
Chronicles.

Attempts to stifle the Internet, with lawsuits or state action, are going
to be doomed to failure by weight of numbers. The “I am Spartacus” defiance
shown in tweets and blogs recently is a healthy sign. The title of “honourable
member” is now said sarcastically after the expenses scandals by some
politicians, the judiciary are likely to go the same way if people lose all
respect for their actions.