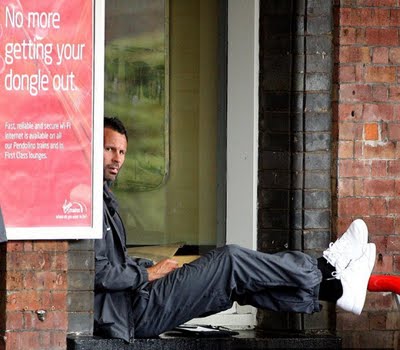 Just think, if all the footballers in all the world kept their dongle in their trousers, we could have saved an entire rain forest from being cut down to provide news paper…..

Anna, I must apologise for the total cock up in the order of all these
replies to your worthy respondents.

Your site deserves better than this.

I’m now off for a diet coke and a look out of the window.

To resort to the chappies in wigs
To hide your adulterous
shindigs
And to keep right on tryin’
To cover your lyin’
Gives a bad
name to chauvinist pigs.

RG (screaming at floosie outside of pic) “You golddigger, you must have
seen me coming!”
Floosie “So will the world when I release the video…”

Scrobs, surely that should be Saving Ryan’s Privates?

Oh, sorry. They’re not so private after all.

Ooops. sorry – should have read your entry before posting the above.

Hellfire, I didn’t read them either – sorry!

Quagmire on Family Guy has been breaking the injunction for ages, “Giggedy,
giggedy!”

Showing for the first time: –

And if the rumour’s true, the beautician has been prevented from
detailing the treatment.

Understood to be “Shaving Ryan’s Privates”

More ha ha has! Even the early bit in the film when a limb flies
across the screen…

A picture which is definitely worth a thousand words *applauds*

So appropriate that it’s a Virgin trains ad…

Am considering an injunction myself over muddyfield affair with a Land Girl
(think that’s what she called herself) !

Congrats Anna ! You really couldn’t make it up !