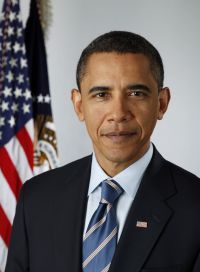 My name is Barak Obama.
I look a bit like Morgan Freeman. And I sound like him too.
Especially in The Shawshank Redemption. Which is quite a good film.
There is always hope!
Mozart is uplifting!
But I am not him.
And I am not Oprah Winfrey either. In case you were wondering.

My name is Barack.
I am President of the United States of America.
That’s really cool. I am really cool.
Yesterday I was Irish. Today I like you English people who live in this place called Britain. It’s cool.
I hope you like me too.
I have a very Big Car.

I can tell jokes. Have you heard the one about Churchill, The Queen and Mother Theresa? [Winning smile]
Unlike Dave. Dave can’t do jokes. Dave doesn’t have the timing. The barbeque “joke” was just tumbleweed time. Totally, man.
Just saying, Dave.
I like Dave. Dave is my friend. I want him to be my friend too.
Will you all be my friends? That would be nice. We can all be friends. That would be…nice.
I can speak very….quietly…
…and then VERY LOUD!

I like you. I like the Queen of you English people here in Britain. She’s cool. My wife likes her shiny hats. She wants one.

These are serious days.
The world is very big. There are lots of people in it.
Many of them are not Americans or English. This could be a problem. Some are even Chinese.
It’s worrying.
We should all be nice. It’s good to be nice.
It’s nice to be good.
We should do good things and love each other.
All you need is love.
Love, love, love.
And tanks, because sometimes people are bad.

We’re getting the hell out of Afghanistan now we have topped Bin Laden and realised we have got nowhere in the last 10 year, by the way.
We have a strong alliance. One of the strongest in the history of the world.
Dave wants to me to nuke Gaddafi and send in the Marines. Dave can go whistle for that one.
It’s your back yard, Europe. Just sort it. Got it? It’s election time soon and we aren’t paying for it in blood OR money.
Dave is still my friend. I love him.
But he has no planes or boats or troops anymore.

We are all broke.
It would be good to be rich.
We have no money left, actually. Bummer, really.

My granddad was a cook in your army.
That line always goes down well with guilt wracked Liberals.
[applause]
See!

But now I am President I and have a Big Car. And you don’t have much of an army any more. Which, in terms of the ruthless pragmatism which governs American foreign policy..
..is slightly…
problematical. [furrowed brow]

But I love you all, and want you to love me! [Big smiles]
I love all you English people in this ancient land of Britain.
You have nice trumpets and palaces!
But sadly no defence budget.

I am told that in Australia there is an animal called a duck billed platitude.

Magna Carta! Democracy! Freedom! Human rights! These are values!
Our policies must be ethical and even handed!
We want Arabs to share freedom!
But we don’t mention Syria, or Saudi Arabia.
EVER!

I have to go home now. My car is ready and my wife will give me dog’s abuse if I am late for the plane. She wants to catch the latest episode of House.
I love you all.

“We have no money left, actually”

What about the Change Can? Yes? Oui?

loved the speech (this one , not the one from The One…)

BO does a pretty good job at reading lines from a teleprompter – that’s
quite hard you know! But other than that – he is an empty suit and this has
been evident to even the mildly inquisitive from Day One….

The anti-Dubya jibe? – not so sure about that – he was an easy target but
was in many regards better than several other presidents – and especially
better than the current clown…

As far as I can recall. The only other person to claim to be Black, Irish
and American was Peter Griffin from Family Guy. One is an fool who does not
understand the complexities of the Middle East. The other is a cartoon
character.

Ken Clarke had the right idea. Catch up on some kip. Ken’s heard all the
diplomatic mutual backslapping stuff before, anyway – they all sound the same
after the first few.

Many a true word spoken in jest eh?

I don’t know why but this visit somehow reminds me of that scene in
“Blazing Saddles” where the new Sherrif rides into town.

Did he do a walkabout in London? – I have this image of …

I can hear his voice as I read it… well reported, Randy H!

The media and the hanger’s on are constantly on television and radio
dissecting Barry’s speeches, extolling to an ignorant public his virtues of
being a great orator, his wonderful and subtle use of language, and his vision
of building a utopia fit for all. In actual fact – and I’ve thought this from
the very first time I heard him speak – he’s a very poor orator; his speeches
are mechanical, prosaic, banal, hollow and totally uninspiring.


But, at least he isn’t Dubya…and he has a big car.

I’ve never thought him a great orator either but the media have invested
so much in him being the messiah that we are hardly going to be served the
truth now.

Why can the man never look at the camera? Cold, characterless and shifty
is how he seems to me.

And what about this islam thing? He can make bold statements on behalf of
his own country but don’t drag the rest of us down too. Islam has no place
in the UK, Europe or indeed the world. It a curse on ALL peoples and the
sooner it is confined to the reference libraries the better for everyone,
wherever they may live.

Whistles! Stamps! Throws hat in air! Puts on old Elvis recording of the
Battle Hymn of the Republic. Yea!