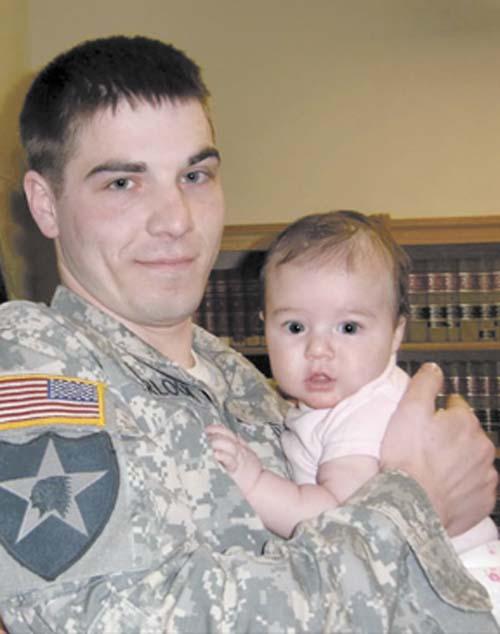 Much hyperbole in the media marshes today over the case of Jeremy Morlock, the US soldier who pleaded guilty to the ‘murders’ of three unarmed Afghan civilians. There is universal displeasure that he ‘only’ received 24 years in prison for this heinous crime.

De-constructing his crime has occupied much thinking time this morning.

Let us take ‘Afghan civilian’ first.  The forces in Afghanistan are not fighting the Afghan army, the men they are supposed to kill don’t wear uniforms, and therefore technically, everyone they kill is a civilian. That is what we have sent them out there to do. I will grant you that they are supposed to establish the thought pattern of their victim first and make sure he is a civilian that is opposed to the allegedly ‘democratic government’. In condemning Jeremy Morlock, are we saying this is the first time a mistake has been made as to which side this civilian is supporting? Obviously not, for American forces – and British – have been responsible for many civilian deaths. Some ardent supporters of the ‘legitimate’ government.

Is it the fact that these victims were unarmed that led a judge to disclose that he would have preferred to see Jeremy get a life sentence, but was bound by the plea bargain he had entered into? Are we saying this was the first death of an unarmed combatant? Good God no. There have been many such deaths.

The detail that appears to have exercised the judge the most was the answer to the question ‘did you shoot to scare people or shoot to kill’ – the all important mens rea in any murder trial – to which Jeremy replied ‘The plan was to kill people’.

Fortunately, most soldiers don’t face civilian murder trials; otherwise there would be many similar convictions. Any soldier firing a cruise missile into a bunker believed to contain Bin Laden ‘plans to kill people’ and cannot possibly know whether they are armed or not at that moment. There are currently 250 British Special Forces in Libya – are we to believe that they will shoot only intending to ‘scare’ people? Or that if they think themselves in danger they will only shoot at a shadowy figure in the darkness once they are assured he is carrying a gun and definitely supporting the named opposition. I don’t believe it. Any war situation is confused; few soldiers would easily pass that judge’s test of their every action.

Nor should they have to. We trained them to kill, we armed them to kill. They have to live with their own consciences. Especially when we send them into morally confused situations with no clear objective.

Is this the first occasion on which a soldier has interfered with the evidence surrounding the person he has just shot? History tells me – not so.

Given that ‘planning to kill people’ is not a crime we generally hold against soldiers, nor is killing unarmed people, nor is killing civilians, given that we have not, since Iraq, actually sent any soldiers out to kill other soldiers, I am left with the inescapable thought that Jeremy’s real crime was to ‘enjoy’ his work, to be photographed smiling alongside of it.

Enjoying your work is apparently morally repugnant in a soldier in a way that just plain killing people is not. I’m not defending Jeremy Morlock – I find killing people a repugnant response to their not agreeing with you. The only justification in my eyes for having an army is to defend us on our own home turf – not ‘taking the war to the enemy’. What I am arguing with is the mass skirt-lifting hissy fit on discovering that a soldier might actually enjoy killing people.

I live in the UK. Our Troops are in Afghanistan too.
If our Troops
commited such crimes, I’d condemn them.

Too many times I’ve seen AMericans defending the atrocities of
US
Soldiers. It says it all that ANY USA people would defend
such
atrocities.

The Nazis would have been proud of such people! (And THAT
says itr all,
too!).

This man and some of his friends in Bravo company killed a 15 year-old boy
just for the heck of it. That’s disgusting. And this article is disgusting for
even trying to put him into a better light.

Unbelievably stupid rationalising article. This man and his thug friends
deliberately picked out unarmed farmers and children working the land in their
own village and killed them because they were bored. Then they cut off their
fingers. If an afghan had done it to an American you’d be horrified.

Under US miltary law Pre-medited Murder has a much more serious punishment
than simple muder.

The judges question about indending to kill establishs what punighment can
be imposed. If he intended to kill he could recieve a death sentance or life
without parole and a 27 year plea bargain is a good deal.

If Irember correctly the maiximum punishment for simple Murder is 20 or 30
years in which case this would be bad deal.

Sounds like the judge is doing his job, being sure of the facts.

An interesting post. I don’t think I agree with it, but it made me
think.

Training and equipping self-selected individuals to kill, and putting them
in a war zone, is always going to produce problems. It’s dishonest to pretend
to believe otherwise. This is done in our name, and we share some
responsibilty.

People sleep peaceably in their beds at night only because rough men stand
ready to do violence on their behalf.
George Orwell

Morlock has been reported to say he was following an order, in the
fuzzy-bunny world of Obambi who promotes a “courageous restraint medal” it is
unsurprising that naive young men are literally caught in the political
crossfire.

Morlock’s actions may not conform to a distorted moral code and he has no
right to indiscriminately kill civilians however if he does not follow an
order he is liable to be court martialled.

“I am left with the inescapable thought that Jeremy’s real crime was to
‘enjoy’ his work, to be photographed smiling alongside of it.”

I don’t think so. I think his real crime was selecting and killing people
whom he had no reason to believe were anything other than innocent civilians
for the purpose of ‘sport’.

The system we run, such as it is, holds than killing human beings is a
wrong. That wrong may be justified, excused or part excused; I can’t see how
Mr Morlock’s actions can fall within any of those modifications.

The big problem in places like Afghanistan is the ‘innocent’ people today
were, most probably, the terrorists yesterday and will be the bomb planters
tomorrow. In that type of war it is extremely difficult to tell friend from
enemy and that is even likely to change day by day.

The only real answer to to get out and let them fight it out between
themselves as it is in Libya (why are we supporting the muslim brotherhood
who support the terrorists?).

If only we had psychics, then we’d know the bomb planters of tomorrow.
Until we do, we have to rely on that awful Americanism of probable
cause.

The matter of Libya defeats me.

The line between civilian and soldier/terrorist is a bit blurred in
some place, like in Afghanistan were office workers in the big towns would
become terrorists during the weekends.

And her I had you typed as a(n admittedly libertarian) soft-hearted l…… –
more concerned with rights than responsibility (a sort of Libertarian
Shami Chakrabarti – not as po-faced & with a sense of humour).
Wrong!
Agree with everything you wrote – including the closing para – and I am a
passionate opponent of euthanasia (voluntary or no).

Oh, and I might change my mind if my going is too painful
(&c.)

The Belgrano incident however, was very different. It was a warship sent to
sink our warships. I doubt if a warning shot across its bows would have caused
it to return to port.

His 24 years was as a result of a plea bargain, so he would give evidence
necessary to convict ‘comrades’ from his US troop who killed Afghan men “for
sport”, without any provocation, and then posed for photos with the corpses as
“trophies”. For me, that’s up there with My Lai.

This case is taking place in the US. If his comrades, who deny the charges
(I believe) are convicted, I wonder if prosecutors will ask for death
penalty?

…who killed Afghan men “for sport”, without any provocation, and then
posed for photos with the corpses as “trophies”. For me, that’s up there
with My Lai.

That would depend on what you mean by “for sport”. Shooting fleeing
unarmed civilians (who minutes before were armed and attacking) could be
considered sport. Shooting at live targets at difficult ranges and in
difficult positions could be considered sport. Neither suggest wrong-doing.
I don’t jnow the facts of this case but My Lai was a gross atrocity against
a whole village (well two) and the slaughter, rape and mutlilation of women
and children and ‘pensioners’. I think we need to know a lot more about ALL
the details. Photos with the trophies is no offence at all, just silly
and/or sickening.

This report, with photos, suggests “gross atrocity” to me.

Thank you. Having read that I would agree. I still don’t think the
act of having the photos taken is that big a deal and this is certainly
no My Tai but it is indeed very, very wrong.

This is a really difficult case as I know absolutely nothing about the
specifics but rather generalities about ‘our’ forces working in other
countries.
Edward III believed it was better to take the fight to the enemy
on their lands rather than subject his subjects to the vagaries of war on
their own lands.
I sympathise with Edward’s view as it does indeed remove
direct issues from us all who sleep safe in our beds.