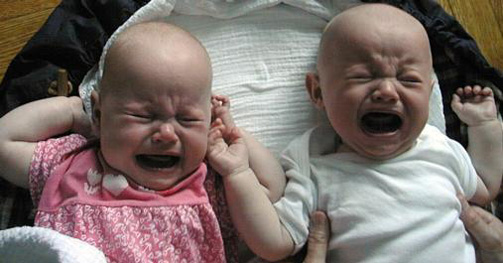 The Twins are silent so far this morning; sucking on their dummies as they try to work out whose piggy bank Daddy Osborne raided to avoid the inevitable tantrum when they pass the sweetie display.

A strange calm in the Blogosphere; Little Leftie Peter is confident that Paul had enough in his piggy bank to pay for smarties and jelly babies and everything. First born, and thus ‘always Right’ Paul is placidly content that Daddy will reduce his twin to hysteria by choosing to pay for a nice educational toy instead.

Like Liverpool dockers, neither of them has even considered the option that Daddy might make them earn their ‘greedy bags’.

The Left wing bloggers have been screaming blue murder for weeks now, outraged that the ‘spoonies’, those whose sickness is not instantly apparent, a term frequently employed by Sue Marsh in her eloquent and prolific posts detailing why Doctors shouldn’t be employed to decide if they are totally sick or just sick occasionally. Sorry, my mistake, it is government funded Doctors who can’t possibly be trusted to decided whether someone who is eloquent and able to write every day shouldn’t go and get a paid job being eloquent and writing every day – and yes, I do know that the GP who gave them that precious sick note that entitled them, so they thought, to never having to do another paid day’s work again is actually paid by the government himself, but it’s different see?

The GP understands that just because you troop off to Bingo three nights a week, that is a relief from the never ending agony of your bad back, and doesn’t mean that you could just as easily sit behind the Bingo callers desk and earn your living that way if you enjoy Bingo that much. Those government funded Doctors that decide that you are not complete useless, they are part of a conspiracy to pay back the bankers stolen gold by cutting your bingo allowance. Got that?

The Right wing bloggers have had their tantrums too; there they are, working hard, why shouldn’t the government do something to prop up their God given right to a profit on their house? Give them a handout for producing children? Wasn’t that bonus part of their contract? How dare a government that believes in law and order ignore their contractual right? Why they might just run away from home…

Peter and Paul, happy to see each other robbed, just you wait till they get to the sweetie display and realise that neither of them are going to get anything.

Even the spoilt twins are going to realise that the childish games have come to a full stop and they will have to pay their debts like real grown ups.

Maybe best not to be left or right. Just ignore the whole thing.

The government- sponsored Ponzi schemes are unravelling,( not enough
“workers”to keep the illusion going,) in the old days even Liverpool
dock-”workers” contributed to the Ponzi scheme. No more dock-workers, no more
coal miners, no more ship-builders, but they all want their pension, and
disability payment and heating fuel allowance and beer money.

Your pension deductions were never invested, governments just spent that
money and more besides. To finance the additional expenditure they issued
bonds, if you have a private pension or even a savings account the insurance
co or bank hold those bonds as collateral. If they hold too many Greek or
Portuguese govt bonds there is a good chance they will be paid in devalued
currency (they just lost money) lets not even get into UK or US govt bonds,
this can go along for a while but in the end the pension becomes
unsustainable. Government pension schemes are essentially bankrupt there is no
money available they need to keep churning money from weekly payrolls to the
pensioners. Less workers means bad news. Thats when government start changing
the rules and telling people they MUST pay into the fund bigger sums for
longer periods(sound familiar). private pensions and savings accounts expect
lower interest rates and payouts-sorry sucker(including me) , you
lose-again.

You have two choices, 1. believe the government can sort this out by
robbing young Peter his entire life and hope he does not understand 2. Go John
Galt (look it up).

But I would not worry too much, as Harold Wilson said the pound in your
pocket is still worth a pound, too bad if you want to buy food or petrol and
the producers want to be paid what the stuff is worth and that pound has
devalued since last month.

Government is the problem.
Never solve[s] your (or any)
problem.

“Peter and Paul, happy to see each other robbed, just you wait till they
get to the sweetie display and realise that neither of them are going to get
anything.” ….. until they nick it from some other poor defenceless citizen,
‘cos it’s their “Human Right”

Whadya mean love ‘greedy bags’? Are they the tings that ya find in the
bottom of the hold that you can take home…….

Will my car run on dat stuff?

We could certainly do without a gumment…& I mean first the unelected
& arrogant EU über-lawmakers. Then we can deal with the home-grown
clones.
Budget:
“Sorry, that’s not the right answer.”
“Oh! Does that
mean I’ve lost?”
“Yes,,,but it also means you don’t win.”

Ah there’s plenty more where that came from (eyes roll) we’re about to bail
out Portugal to the tune of £3bn. Maybe Gaddafi is ‘lending’ it to us?

Portugal no effective government.
And now the people of Finland have
no government.
http://ironiestoo.blogspot.com/2011/03/finland-threatens-upgrade-of-efs-euro.html

Let’s hope this EU domino effect carries on as Belgium seems be doing
okay without a government for the past 286 days. They have even managed to
join in the bombing practise in Africa!

All that shows is the countries are run by the public servants and the
elected reps are a waste of money. How much would we save by
decommissioning the two houses of parliament?