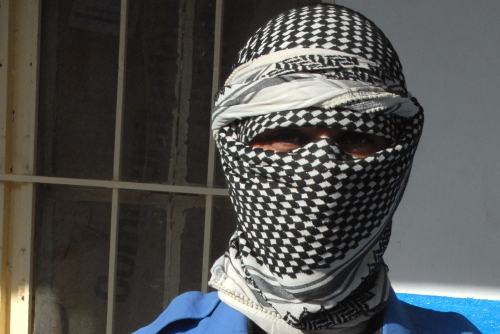 Anybody got any idea who he is? Where he is? What he stands for? How he feels about selling oil to Europe? Does he live in a cave? A house? Wife? Children?

We know the British government sent a delegation to meet you, the French even accorded you ‘diplomatic recognition’. We are just the humble mugs paying for your attempted coup, perhaps its none of our business.

I only ask because so far we have B-2 stealth bombers, Growler and Harrier aircraft; the destroyers USS Barry and USS Stout firing Tomahawk cruise missiles; the amphibious assault ship USS Kearsage; the command and control vessel USS Mount Whitney; Spanish, American and British submarines, French Rafale and Mirage aircraft; refuelling and surveillance aircraft; the aircraft carrier Charles de Gaulle and escort ships, Typhoon and Tornado aircraft with all their refuelling and surveillance aircraft; a Trafalgar-class submarine firing Tomahawk cruise missiles; the frigates HMS Westminster and HMS Cumberland, Canadian Tornado aircraft; and the Canadian frigate HMCS Charlottetown; Spanish F-18 aircraft with their refuelling and surveillance aircraft; and some Danish and Belgium F – 16s, all fully employed making sure your supporters don’t get fired on from the air whilst you try to topple Gadaffi.

You’d think someone who could muster that sort of support would have his own PR man to tell us something about himself – but not a word. Silence.

Mystifying Mustapha – who are you?

Shouldn’t we be told?

I suspect the person illustrated wearing a tea-towel is none other than
Mustafa Fagg, who is banned from all pubs and most public places in our
magnificent Septic Isles.

An oldie but a goodie, bought a smile to my face on day filled with
miserable news.

The HAMAS (Islamic Resistance Movement) Charter states in Arabic they are
part of the Muslim Brotherhood and everyone knows if it has the word Islam in
it then it is PEACEFUL.( When they quote the Quran in their martyr videos
while wearing a bomb vest and holding a Quran in their hand calling the name
of Allah and Muhammad it is because this has nothing to do with Islam.)

I don’t think there is any mistake, but I could be wrong.

When you vote conservative and get “big society” or the most successful
economy in the world is communist or the supposed free-market icon (US)
bails out banks and insurance companies I often wonder if my dictionary
works anymore.

Perhaps peace as it is used in the religion of peace has lost something
in the translation.

Thats Hamas, they build schools with roofs modified for mortars and
hospitals with ammunition stores-nothing to worry about, all jolly good
fellows. They have experience “rebuilding”Gaza which mostly consists of
tearing out any money-making enterprise like greenhouses, good socialists, the
camoron will getting along well with them.

BTW the Canadians (though stupid enough to get involved in this) are not
stupid enough to buy Tornadoes they fly CF-18′s , modified F-18′S. I don’t
know what the modification is probably has bilingual warning signs-ejector
seat/chaise ejecteur to appease the quebecois.

He’s whatever the Arabic is for “the Stig”. Al-Stig?

Those eyes look like those of the multi-millionaire Catholic Middle East
Peace Envoy, sorry can’t bring myself to write his name without swearing.

By god, you’re right – its all becoming blair now.

“It is I, Le Blair” (Lifts Glasses to show without disguise”

NB, This joke only works if you can remember 1980′s Allo’ Allo while
recalling the punch line of the character Leclerc and saying the punch
line in a mock French accent.

Otherwise it is just not funny at all. It is at time like these I
realise my parents let me watch too much TV

“I was just pissing by the window…”

As was Gruber the effeminate German officer who had a little
tank.

If there’s one thing I’d like to punch the former archbishop of
Westminster for, it’s for the fact you can in fact predicate “Catholic” of
That Wee Shit. ugh ugh ugh ugh ugh. the humiliation.

How can you say that, I have checked many lefty journalistic pieces and I
now sure that this is all a Conspiracy carried out by the great Satan the USA
and his European Crusaders/Imperialist assistants who are hell bend on
invading Arab/Muslim lands in order to force them to convert to Christianity
and become Jews.

You might argue that this is in response to requests for help by the
oppressed, at the secret request of the Saudis and other Arab leaders who then
distance themselves publicly, at the request of Arab league, at the request of
the security council or even revenge for Lockerbie, Fletcher or providing the
IRA with weapons.

But I know it is a Zionist plot to remove a Zionist puppet as part of the
Zionist global conspiracy. LOL

I could have sworn I saw him serving shish kebabs in a chip shop in
Streonaeshalch. If it wasn’t, it was his spitting image…

I reckon we’ll have troops on the ground within a month and once they are
there they will never leave.

And if the Saudis think they have any different a fate in store then they
are fools indeed.

The whole Iran thing is bullshit and misdirection. The US has no interest
in Iran.

Don’t forget the Qatari contribution of 6 x Mirage plus a C130 Cargo
plane.

For an awful long time Western powers have been waiting for the excuse to
bomb Gadaffi. He has been nothing but an international terrorist giving IRA et
al tons of semtex and guns for example. Yvonne Fletcher never got any justice
either. Although Ron had a brief go in 1986 he didn’t really have much of an
excuse. Now we have and he’s going to have his arse pounded until he goes into
Saudi in exile like that other humanitarian, Idi Amin.