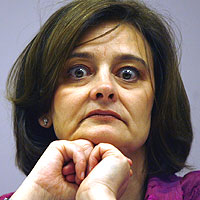 Handbags are so last year. Time was when a £2,500 freebie Hermes handbag was enough to boost the fragile ego of fading celebrity. That badge of office appears to have fallen by the economic wayside.

The latest gift to the overlooked ageing celebrity is cut price defamation rebuttal. Never heard of it? It’s here. Restaurateur Kenneth Tong’s bequest to the world of damaged image rights and lack of publicity.

Whilst some of last year’s men and women flock to make fools of themselves on the dance floor or ice-rink, and some show off their caring pugilistic side flogging insurance, the truly stylish has-been is over on Tong’s emporium.

There does seem to be a preponderance of left wing celebrities on there – I was particularly enamoured of Bianca Jagger’s refutation of the oft quoted story that she ‘rode a white horse into Studio 54’ – she didn’t, it’s a blatant lie, see? It was her birthday and someone else bought the horse into the nightclub as a surprise, and she only ‘briefly mounted it’. It was 30 years ago, and that ‘blatant lie’ still burns into her conscience and the record must be put right.

One of the most prolific users of this new site is the most celebrated left wing lady of all – Cherie Blair. Entry after entry – refuting such important details as the designer of a dress that she didn’t wear anyway……

I was puzzled by that, for to buy a page on this site to refute incorrect claims on Twitter or elsewhere about yourself will cost you £650, a fraction of the price of a new Birkin bag, but why would one of our top lawyers waste her money like this?

Ahhh! Kenneth Tong gave away 30 free pages to top celebrities to get the web site off to a good start. Anyone care to bet that Cherie was just availing herself of another freebie?

Of course in no time at all, the hoi poloi will be clamouring to use this service and we will see the likes of Jordan Price on there – ‘me tits didn’t cost £5,000, they wuz £5,750’, and then there will be the inevitable ‘designer rip-off’ copy sites where Kylie and Jason will slog it out through the night –‘he sez im a cheap slg, but the last geezer I hd gimme £10,000, thts nt chp isit’?

Truly inspired. The site will be a winner – I must stop laughing, I’ll never get any work done today.

I see God hasn’t corrected any attributions yet. Mind you, going by how
long He took to create everything maybe six days of reviewing will be in
order. I am pretty sure there will be one hell of a lot of entries on the
seventh day.

CB is living proof of the mistake it always is to educate the common
masses.

“…someone else bought the horse into the nightclub as a surprise, and
she only ‘briefly mounted it’.”

Thank god Mick Jagger wasn’t in the room, that’s all I can say…

Sitting on my desk, my aging pussycat glimpsed that dreadful picture &
ran panic-stricken into the garden…please be more careful, Anna.
(with
humble respect, no ‘the’ before hoi polloi, I am told)

Re the enhancement of Katie Price’s massive tits:

b) The current mammaries are merely the third stage of an on-going project
which ends in 2014.

And unlike most construction projects in the UK, is likely to be finished
on time!

….but over budget, and will need digging out and refurbishing shortly
after they have been open to the public.

Perhaps the useless woman is frightened that she will no longer be front
page news, but will instead fade back into the insignificence from whence she
came. Perhaps she will finish up as a footnote on the underside of the more
obnoxious part of recent history. We can but hope.

Correction: “I am devoting my career to building up a massive portfolio of
properties paid for by (a) legal aid and (b) speeches my war mongering husband
gives and (c) writing ridiculous articles about my sex life. Also, this week I
am wearing crystals to ward off the potentially evil effects of the Chilcott
inquiry”

You will find yourself in comments of the week again if you’re not
careful!