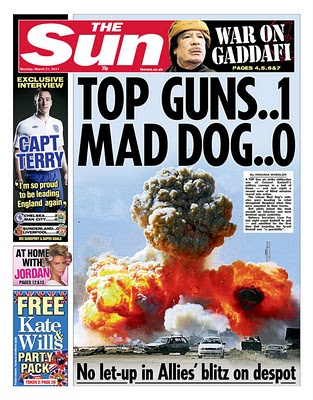 The main stream media is positively drooling over the stuff. Decapitated bad guys. Blood stains on walls. Terrified women. Big bangs. All colour pictures from inside the critical care units.

The Sun is one of those papers that has always told its audience what to
think. Sadly, the ones that tried to present facts and a few starting points
so that readers could consider the evidence and think for themselves have also
degraded to that level.

I haven’t bought a national newspaper for many years. I bought the local
one once when I had my picture in it, and I believe my wife bought one of the
nationals for a week to collect a particular set of special offer tokens, but
we certainly didn’t buy them for the news.

Flies are the only winners in this NFZ – plenty of corpses for them to
feast upon.

It’s only a matter of time before we start bombing Zimbabwe – or maybe not.
No oil.

Zimbabwe has large mineral deposits, currently being extracted by the
Chinese, we wouldn’t want to upset them, would we now.

Something positive had to be done to remove from the front pages of the
MSM, the fear of a Fukushima catastrophe.

For the “why”? I can see only a few reasons for Dave to have gotten
involved in this…

At a time when the UK finances are in a supposedly parlous state activities
causing increased oil prices, further defence spending and higher risk can’t
ever be a good idea.

Whilst there may be the thought that the activities of the rebels are
admirable, our support for them is highly suspect. Analogous might be that we
think Prince William and Miss Middletons’ upcoming nuptials are a good idea
but we wouldn’t seek to involve ourselves in them any more than we absolutely
had to.

Whether or not we declare war on a country obviously depends upon
a) how
much oil it has
b) how embarrassed we have been by our fraternising
with/encouraging of the murderous leader.

I’m confused, there’s reports from Libya that Fhaddafi’s son has been
killed by a suicide jet fighter (thought to be flown by a rebel) crashing into
his barracks.

Are we in favour of that tactic now? Because I seem to remember we
were a bit upset about it a few years ago.

Or does it make a difference if it’s not full of civilians? I can’t wrap my
head round the new morality…

Why the hell are we getting involved in this ? Why is The Sun getting all
jingoistic. From where I’m sitting it’s misjudged the mood of its readers who
think the same way as me.

But then for years they backed Blair too. Another pro EU PM.

The Sun is an establishment journal disguised as The People’s paper.

Surely you didn’t expect anything different.

The media scum need something to do after the Jap power stations refused to
blow up on cue.

Must have been MOST dissapointing for all the jouralist bastards out
there.

Anybody remember Private Eye taking a pop at the tabloids during the
Falklands conflict with the spoof headline, “Kill an Argy and win a
Metro”?

Who could forget 300 men dying on board the Belgrano – and the Sun
retorting ‘stick that up yer Junta’.

I can’t be doing with all this delight in men dying regardless of which
side they are on. Its obscene. By all means be patriotic, but don’t take a
childish delight in the idea of a human being blasted to smithereens.

At least in the Falklands war we had actually been attacked by
Argentina (well the subjects of HM Queen anyway) So patriotism and OTT
commentary was to be expected.
But for the life of me I still do not
know what or why we are doing in Libya, it really is none of our
business.

I wonder whether for some in the MSM, conflict of this nature is rather
confused with computer games.

It’s interesting to hear what servicemen who have been in combat have
to say about it. Experience breeds a mature thoughtfulness. Maybe that’s
what some of the tabloid gung-ho merchants need – a bit of experience at
the sharp end. Being in the target zone of a Cruise missile might
concentrate their minds a bit.

They need to learn that in real life, there’s no ‘Reload from last
save point? Y/N’ option…

Nevermind, they’re offering a free Kate & Wills party pack if you
collect all the tokens!

I think that sums it up quite well.

And if a shot down and captured British pilot has a hair on his head out of
place, then you’ll really see some headlines…