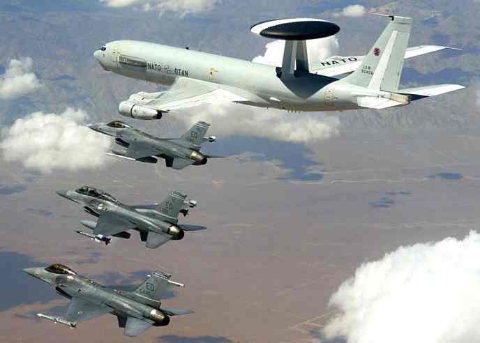 I listened carefully to David Cameronâs speech on to the Scottish Conservative Conference on Friday as he made his case for intervention in Libya by enforcing the âNo Fly Zoneâ.

He made a strong moral case. Could we really stand by as Gaddafi imposed a reign of terror on his own people? Surely not. And he made the case clearly and forcefully on legitimacy (sanction from the UN) and, crucially, on the UKâs strategic interest, pointing out the dangers of an unstable and once again pariah regime on Europeâs southern border, in particular the threat of mass migration in the face of terror.

As a performance I thought it was measured, clear and highly persuasive.

But thatâs the problem, isnât it? Cameron is good at his job, and part of his job is to persuade. Just as Tony Blair did.

Once again we are presented in the media by what seems to be less of a war and more of a video game, with points awarded for bad guys âkilledâ (itâs not real you know) and perhaps subtracted if there is a touch of âcollateral damageâ.

It is also assumed that that there will be no come backs; that this is a war which takes place a long way away, and we may safely digest it on the rolling news channels, perhaps sustained at suitable intervals by tea and biscuits.

But politics and war obey the immutable laws of the universe just as does the physical world. One of those immutable laws is Newtonâs Third Law: for each and every action there is an equal and opposite reaction.

How that reaction is expressed is another matter, but it cannot be avoided. We just donât know what itâs going to be. It is another way of describing what regular contributor SadButMadLad called The Law of Unintended Consequences.

Air power is all very well, but we live now in the world of âasymmetricalâ warfare, in which the combatants do not play by the Westâs rather refined rules of fair play. If Gaddafi remains in power he will hit back with whatever unconventional means he can, and that could mean a bomb on a bus, a plane or a train in Paris or London.  After all, Gaddafi has form for that.

Already I hear there are rumblings of division and splits with Arab countries. Saudi Arabia, with its large and largely British armed and trained air force, is doing nothing. I hear an analyst explain that the Saudi Government, itself experiencing unrest, is furious at apparent Western support for the fall of Mubarak in Egypt.

Despite what may be the best of intentions, once again the Arab world sees America, Britain and for once France bombing a Muslim country.

You seem to be conflating three separate things â The moral case for
intervention as made by the Prime Minister, the reaction of the Press, and the
possibility of reprisals.

I think you have to deal with them separately. Cameron, I think, genuinely
believes what he says. Were we not to act we may well end up with a situation
like Rwanda in the 90â²s â the world stood by and watched whilst almost a
million people were hacked to death. And to his credit heâs sought wider
support and legitimacy via the UN.

The fallout from this is the press behaving like â well â like youâd
expect, and the reaction of nutters who believe in the whole death, glory and
public transport thing. I think perhaps in this we imagine an enemy who is
more rational, capable and motivated than he would be in any case.

Hereâs praying for a swift and peaceful end to the whole terrible
episode.

Why does the âweâ always have to be British?

If Gadaffi wants to play it clever he can destabilise Cameronâs own power
by facilitating emigration of those who donât want to live there to here.

Why â yet again â are we at the vanguard of military action in a country
that has nothing to do with us ?

Canât we just let them get on with it and be friends with whoever wins
?

The Colonel neednât play it clever â the human tide is running that way.

AP reports that 15,000 more Tunisians have arrived illegally in Lampedusa
following the airstrikes against Libya.

The situation is confused because apart from the Tunisians, there are a
several hundred â and it may become thousands â who claim to by Libyan for
refugee purposes but are in fact Egyptian.

If Cameron wanted to stop illegal immigration from North Africa and
bordering countries, this appears to have made a bad situation worse.

âCanât we just let them get on with it and be friends with whoever wins
?â
Too late. When the protestors/rebels looked to be favourites to win,
Mr Cameron (and others, to be fair) lost no time in bad-mouthing the
admittedly odious Gadaffi, wasting all the toadying lavished upon him by our
own Mr Blair. So obviously, we cannot now allow Gadaffi to win.

Somebody in the pub pointed out to me,.
Last time we bombed (allowed
bombing) of Libya didnât a plane fall on Scotland?

Part of me believes that Cameron wants, no needs the violence to spread to
Europe and the UK. Retaliation by Libya and others will be just the reason to
increase security measures at home and clamp down on his own people. A state
of emergency and new powers to control us.

Let me just say I donât know what the answer is to this little dilemma and
conundrum. Hence equivocation. I really should be more decisive! Itâs just
that we always start out with good intentions, seemingly morallt right, and
and up with a a mess. The law of unintended consequences. But I share the
learned Annaâs horror of war as entertainment.

Do you think the bombing would stop if Abdul Baset al-Megrahi were to be
sent back to Scotland?

The MSM may have âforgottenâ Moscow Airport but you can be sure others have
not. The Security Theatre at our airports is just that â¦ theatre, it serves no
security purpose whatsoever.

I am not defending the man but I am utterly convinced that the theatre
being played out in public by Mr Slick and his new friend Kermit Sarko is just
that theatre.

In other news the Japanese reactors seemed to have defied nature and
survived almost intact but Mr Slick is saying he is 100% behind the madman
Huhne whose âpoliciesâ may end up killing more people than Gadfly, caged or
uncaged, ever could.

I thought we were a Muslim country, oh sorry I canât keep up!

And since when was mass migration a problem anyway? We just seal our own
borders andâ¦

Ah. Right. Of course, we canât, can we? We have to kowtow to the EUâs
rules, donât we?

Thereâs one part of Cameronâs argument that baffles me and itâs the ââ¦ in
particular the threat of mass migration in the face of terrorâ. Surely if life
in Libya is so bloody bad for itâs inhabitants, that mass migration would
already be underway? And if Gadaffiâs good at at preventing said migration,
surely itâs in Europeâs best interests to let him carry on being
efficient?

Iâm not condoning his actions or indeed saying people should not migrate if
they find their circumstances untenable, but it appears to me that there is a
contradiction on the part of those finding excuses to go to war (or âcognitive
dissonanceâ as I believe it is fashionably called).

Anti-Ghadaffi people that could leave Libya will already have done so and
some will have come here.

If the regime changes it will be the despots and their underlings that
will flee Libya and some will come here.

We have first welcomed the underdogs and when the sides change position
we will welcome the underdogs again. You could almost think they want to
import a civil war to Europe if not the UK specifically.