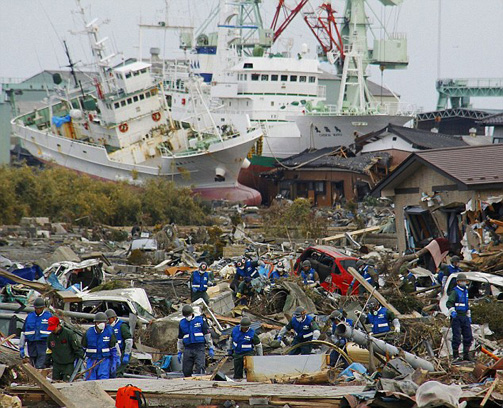 We look at the devastation wrought on Japan and recoil in horror. So many lives lost, so many homes to be rebuilt, so much employment lost for ever.

An earthquake, followed by a Tsunami, followed by an explosion in their nuclear plant. Could any country suffer more? It is a vision of Armageddon that we can all understand.

The insurance industry are saying today that it will cost around £38 billion pounds to put it right. It gives us a reference point to see what £38 billion can do.

Can I just point out that that figure is £2 billion less than the £40 billion pounds the Conservative government are planning to borrow next year in order to finance the damage that hurricane Gordon wreaked on this country? A figure which is regularly referred to by the BBC as a ‘savage cut targeting the most vulnerable’.

Gaze on the horrific images from Japan and ponder just how much you could put right with £38 billion if you weren’t borrowing it to keep the whingers quiet.

Adam Collyer has an excellent post today, pointing out the demographics of Red Ed’s demand that we borrow more money – the working man paying more of his wage over to the capitalist bankers. Ironic, and worth reading in full.

@annaraccoon2010 a casual look at where we go wrong http://callitjustice.blogspot.com/

Good to see Nick Robinson reminding Uncle Bollocks that Labour had planned
even bigger, more savage cuts. And let’s remember Labour were only a matter of
weeks away from calling in the IMF to bail us out.
The savagery of the cuts
they would have imposed does not bear thinking about.

Ian, do you think this was the reason for the lacklustre Tory campaign in
the general election, that they did not want to win so that someone else
would carry the can for the problems we have to go through to sort out the
deficit?

I shamefully admit that I have found myself in agreement with the
Conservative Party. Something that my Scottishness finds deplorable and my
working class upbringings find traitorous.

So far I cannot fault them except for pussyfooting around with foreign aid
to terrorist states and countries like China and India with their own space
missions.

£130 Million every day in national debt interest (or £90,000 every minute
if you prefer just to pay the interest on a debt.)

What is it for. Well it is called the Public Sector Borrowing Requirement
(PSBR) the difference between the Tax revenue and government spending.

The Public Sector have GOLD plated pensions. Yes the contribute but NOTHING
like the amount the receive back. NOT ONE single IFA is allowed to advise a
Public Sector employee to leave the Government Scheme as it is the best in the
Country.

Do you get 6 months full pay, 6 months half pay for stress. Promoted every
few years for incompetence, Lump sum on retirement, pay rises every year, job
for life and you do not have to have a single brain cell to be employed. Just
be in a Union or some other lefty organisation and you are assured a top job
at the council.

If you are a totally Useless Cunt who has been to University and have a
degree in “idealism” you might even get to advise Ed Balls or that mumbling
spunk bubble Milliband. Maybe a job at the Guardian or BBC.

All paid for by You and Me. All together Bend over and prepare to be
shafted by the Socialists. Then stand up and work our way out of it for a few
years until the next generation of know fuck alls start voting.

Describing the interest debt per annum in terms of Japan’s devastation is a
very clever metaphor Raccoon, I like it immensely. It conjures the utter
destruction wrought on the british people EVERY YEAR from now to infinity (as
an “investment in people”).

The difference in comparisons between Japan and the yUK is that Japan will
clean up and rebuild a vibrant society and have something to show for the
expenditure in several years, the yUK will have NOTHING except the cigarette
butts, vomit and empty beer bottles strewn around the high streets by the
wastrels that your “social” programmes fund with the annual borrowings.That
devastation is arguably worse than Japan.

That image of a great mass of fetid seawater, sewage, smashed houses,
wrecked cars and dead bodies laying over the land year-after-year is a mighty
image of the destruction that has been wrought by post-war politics in the
yUK.

Thanks for the link, Anna.

The point you are making is an extremely telling one.

Would that the Tories were indeed only promising to borrow £40 billion next
year, though. I think you meant “cut” and not “borrow”. (And in fact £18
billion of the £40 billion is tax increases rather than spending cuts.)

They are in fact proposing to borrow £116 billion next year, according to
last year’s budget figures.

Quite right Adam, I did mean cut!

If Gordon had been running a public company and left it in such a parlous
state then I think that the shareholders would have a very strong case for
suing him for failing in his duty of care. Luckily for him politicians have
exempted themselves from any duty of care.
What annoys me is the constant
carping about axe-wielding Tories and their savage cuts when in fact they are
just planning to return spending to its 2006 levels.
I was taught that you
can’t borrow your way out of debt – if either of the Eds has discovered some
new economic laws I would be interested hear about them.

There is no reason why the current government cannot introduce a law to
lay liability for the increase in debt on the members of the prevous
governments of B-Liar and B-Ruin, unless its members are afraid that some
future government will lay some bill at their doors.

If you take the premise that two negatives make a positive, there might
be a case for spending one’s way out of debt – perhaps that was the basis of
the magic mushroom-chewing Labour government. But methinks that digging out
of a hole leads to a deeper hole..

It’s an irony that the party traditionally and historically associated with
the working man and his lot should be actually the most devoted and
sycophantic slave of Beeg Beesknees Capitalism and the international banking
cartel. It’s also ironic that most of their loyal supporters are so
brainwashed that they continue to believe the myth that they represent social
justice and fairness – against the clear testimony of recent
history.
Meanwhile, countless Japanese lives have been lost and families
and communities have been destroyed. Puts it all in context, doesn’t it…?