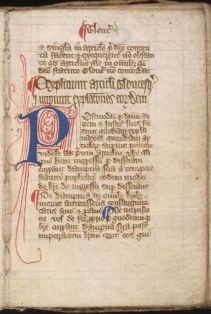 Last November a ceremony took place in a field by the river Thames at Runnymede. It marked the beginning of five years of celebrations leading up to the 800th anniversary of a king signing a piece of parchment. The parchment is, or was, what became known as the Magna Carta.

While essentially the laws and rights outlined in the Magna Carta have since been superseded or swapped for others, the founding document is still held as historically important for being the first time rights of the ordinary people (or at least the free men) were codified in England. The original Magna Carta was also used as a basic outline for the Constitution of the United States of America.

It was a pretty influential document.

There is an irony, then, that successive governments in the United Kingdom have seen fit to chip away at those basic rights set out in AD 1215. Such basic things as having the right to be judged by a jury of your peers, or not being imprisoned without due process of the law, and so on.

What I find frustrating is that hardly anyone seems to care that these rights are being taken away from under our noses. Our rights as citizens of the UK are being eroded, bit by bit, chiefly in the name of “increased security”.

“They who can give up essential liberty to obtain a little temporary safety deserve neither liberty nor safety.” — Benjamin Franklin

The problem I see is the general population of these benighted islands is far happier with their noses stuck in colourful, noisy celebrity-obsessed magazines and newspapers, watching endless and ultimately pointless “reality television”, and looking forward to a royal wedding this year. As long as they have their bread and circuses, what do they care if people get locked up in prison without due process of the law, or people are tried in a court of law without a jury?

It also seems those who claim to have been elected with a mandate from the people are complicit in this charade. Look at the proposed public spending cuts, all in aid of reducing a huge deficit in the country’s finances, for example. This will, of course, hit hardest those least able to cope. All the time our lords and masters, most of whom are millionaires we should never forget, chant the platitude “we’re all in this together”. All the time, huge corporations are legally able to avoid paying vast sums of tax to the state, sums which would virtually halve the budget deficit at a stroke. But, no. It’s the poorest, the disabled, the retired, the unemployed, the disadvantaged — these are the people who will be made to suffer.

I don’t know. Unless we all decide to stand up and be counted, I guess nothing will happen to change anything. Apathy with win, again. We’ll just have to be happy with the prospect of a royal jamboree, an Olympics, and then decades of blood, toil, tears and sweat. Never mind that everything is a huge distraction from what’s really going on, just keep the proles dosed up with entertainment and food.

I shall leave you with thought that at least some members of the Fourth Estate are beginning to take notice. I notice an increase in stories covering the real news, appearing in places where you don’t have to dig too hard. Perhaps there’s hope for us yet.

**All men are equal before the law.

But women are more equal than men and children’s interests are held above
all others. Women represent children and can even be mistaken for them.

**Justice must be seen to be done.

Except where it affects the most fundemental of society’s units, the
Family. They shall be shrouded in secrecy so you don’t see the shrouded men’s
bodies thrown out of the back door.

** A man found guilty of a crime, by his peers, may be punished, but his
tools of trade must not be touched nor be he dispossessed of his property.

Unless his wife takes them in which case his peers will not be heard nor
his guilt need be established, just so long a a Judge approves, in secret.

The “economic crisis” is being used as an excuse by a right-wing government
to remove anything of value which England has got. I say “England” advisedly
because of course Scotland and Wales have special devolution arrangements
which somehow seem to give them lots of things free. How any self-respecting
Lib Dem can be a part of this is quite beyond me but I suppose that the taste
of power did not take too long to corrupt them.

This is the definitive take on Magna Carta:

People won’t take notice until some sort of catalyst happens. But people
are angry and eventually, as long as the pressure is kept up, I believe
something will happen to wake people. When it does I think it will likely be
something apparently quite trivial that catches fire to people’s anger, and it
will happen suddenly.
As for Magna Carta it predates statute, so I don’t
believe parliament have the right to set it aside. Most certainly not when
laws or treaties are made by ministerial statute without scrutiny by both
houses of parliament.

It is to the shame of the Labour Party under Blair and later Brown that
they were one of the key players in driving people away from politics (and I
say that as a LP member). The hard reality is that the electorate have been
given the option of tweedle dum or tweedle dee for so long, they have become
depoliticised.

With all its negative coonotations there remains much to be said for
old-fashioned tribalism. It stimulates debate and enhances the democratic
process. Sadly, Ed Miliband appears to be repeating the errors of
yesteryearand if he continues down this pluralist path, he will continue to
disenfranchise many potential voters.

The key must surely be to create a politics that is accessible to all and
credible to the majority. In that respect, the major parties still have a lot
to do.

For what it is worth (not much) I wrote an essay about the reduction in
people’s rights following government response to civil disturbance at school
(in London) over 50 yrs ago (must have been an infant genius). Nobody much
cared about it then either.

But take heart, political (even including satirical) blogs exist because
there is a body or people who do care. And so we pound away on the keys, every
day. Who knows, perhaps a few read and think, perhaps even listen (if you can
do that to the written word).

More strength to our fingers and cortices.

The word, “politician” comes from the ancient Greek, meaning, “man of the
city”. As in ancient Greece the city was the state, then we can assume that,
“politician”, transfers to person of the state, in modern parlance. That a
body of people with a vast experience of life should be trusted by the masses
to govern the affairs of the state ( with checks and safeguards – a cup of
Hemlock worked very well) is the basis of Democracy. Whether or not the
British contemporaries of Pericles and Aristotle are capable of such duties is
open to question.

It seems most of those who aim for a seat in Westminster have little or
no real life experience. I would love it to be come mandatory that all
prospective MPs should have at least a decade’s experience in a real world
job before they can stand for election.

Currently, we have a government composed mainly of political leeches who
studied politics at university, then worked as political advisors, then
stood as MPs. They all exist within a Westminster bubble, with absolutely no
idea how the real world works, or how their decisions will affect the
ordinary folk out here.

(Disclosure: I was very close to standing as an independent candidate at
the last general election. Total lack of funds meant I couldn’t complete the
application or field a deposit.)

“Unless we all decide to stand up and be counted, I guess nothing will
happen to change anything. Apathy with win, again.”

Methinks there is protest growing and being it is organised. Suggest you
take a look at VColumn if you on Twitter as it seems something is afoot as
they say.

I’ll look at that, thanks. I know there is a growing swelling of dissent
out there. Take the UKuncut campaign, for example, which is outlining how
tax avoidance could be stopped and save the country after all.

I still think apathy is a strong demotivational force, though. =o(

I care a very great deal about MC1215 and I am using it to rebel against
this disgusting government we have, not to mention a monarch who has violated
every single one of her Coronation Oaths.

Articles (Chapters) 61 and 39 are very much in force today. In fact, when
successive governments repealed the other articles they broke the law. I am
aware that parliaments cannot bind those that succeed them but MC1215 was NOT
a statute. If it wasn’t created by them, it cannot be amended or repealed by
them. MC1215 was in force 40 years before our first parliament sat in
1265.

I agree that most are more concerned with Corrie or the footie, but more
and more are waking up each day. The Hundredth Monkey Theory will kick in any
day now.

I long for the day when that tipping point is reached and people realise
that they have been usurped by a morally bankrupt government with the support
of a traitorous monarch.

A good place to go to for some encouragement in these dark days is to be
found on the Libertarian Alliance’s website; Sean Gabb has posted an account
of what happened in Birkenhead recently. People are starting to stand on our
ancient rights in defiance of the present de facto order:
https://libertarianalliance.wordpress.com/2011/03/10/freemen-of-the-land-in-action-again/

The present decline started when critical thinking was removed from the
subjects taught in schools – but then what politician wants the subjects
thinking, they might just see they, the subjects, are being taken for a
ride.

The real question is – do we need politicians at all?

Excellent and timely, Snaptophobic. On slightly oblique note I went to see
the film “Ironclad” last weekend, which purports to tell the story of how King
John tried to renege on Magna Carter and was frustrated by a small band of
dsperadoes hanging on in Rochester Castle. While there is an element of
historical truth it is of course about 120 minutes of very violent hokum with
some solid performances from a strong caste, and we get knights templars too –
well they are fashionable at the moment. Anyway, it occur to me that something
on Magna Carta would be interesting. Was it quite what it seems, or was it in
fact intended only to look after the Barons? By the way, one detail, the King
never signed it. Only the Royal seal was affixed. They get that wrong in the
film too.

Tell me about it.

From this side of the Atlantic, it looks like my ex-fellow countrymen
don’t want liberty at all. Never mind ‘deserve’.