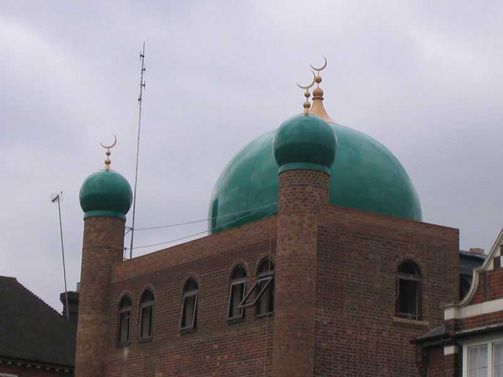 British enterprise and adaptability at its finest. With regard to this morning’s post – we do have our own ‘minaret manufacturer’.

IJF Developments at Rishton, conveniently close to Blackburn. Minarets made to order.

That is what is so endearing about the British, the housing market collapses, the bottom drops out of the monstrous avocado green glass fibre corner bath market, and they battle on, keeping their men in work, manufacturing home grown Minarets.

What a pity they do not manufacture sensibly sized observatories for us
amateur astronomers at a reasonable price.

I reckon the tall mast is for PMR mobile radio – the dipoles are too short
for DAB. Looks more like 400mhz?

I take it these minarets (or whatever the hell they are) are made from GRP,
just like the chimney stacks on some new houses on an estate near me…

Where are the Templars when you need them?

Thats right the Muslim Brotherhood, that peacefull organisation with 10s of
millions of members around the world but mostly in Bahrain, Syria, Palestine,
Jordan, Iran, Iraq, Saudi Arabia, Algeria, Sudan, Somalia, Tunisia and Libya.
now what do all these countries have in common. “Spontaneous” riots to remove
the colonial divisions of land and create a pan Arab Caliphate. I know what
the Flags and Banners at the demostrations say and mean. It is not about
constitutional democracy.

The BBC informs us they are peacefull but how does that fit with the
reality on the ground in these countries rather than the intellectual usefull
idiots of London’s dinner parties?

the Muslims Brotherhood state in English they “want a civil state, based on
Islamic principles. A democratic state, with a parliamentary system, with
freedom to form parties, press freedom, and an independent and fair
judiciary”

What do they say about themselves in Arabic?

The Muslim Brotherhood Movement is a world organization, the largest
Islamic Movement in the modern era. It is
characterized by a profound
understanding, by precise notions and by a complete comprehensiveness of all
concepts of Islam in all domains of life: views and beliefs, politics and
economics, education and society,
jurisprudence and rule, indoctrination
and teaching, the arts and publications, the hidden and the evident, and all
the other domains of life.

Allah is my lord.
Islam is my life.
The Koran is my guide.
The
Sunna is my practice.
Jihad is my spirit.
Righteousness is my
character.
Paradise is my goal.
I enjoin what is right.
I forbid what
is wrong.
I will fight against oppression.
And I will die to establish
Islam

They are stated as the Ispiration for Islamic Jihad and Osama Bin Laden who
have similar aims of creating a Pan-Arabic Caliphate as only the Caliph can
call for Offensive Jihad to really take the war. Never once has anyone ever
stated a single example of where Bin Laden has been wrong on Islamic
Theology.

Never fear, the Muslim Brotherhood have only come to power in one place.
Gaza in their other name, Islamic Resistance Movement(HAMAS).

Surely not! (he said in his most sarcastic tone)

The camoron and the foreign secretary think they are all jolly good
chaps! Of course these mental midgets also consort with the Lebanese
government (widely regarded as controlled by Iran and affiliated with
Hezbollah)

Thank you for pointing out these facts 2Mac, I’m sure the bien pensant
will enjoy the gay murders, stoning of adulterers and female circumcision it
will add some international flavour to your country.

That picture looks like the one in Acton. Or maybe they all look the
same.

Doesn’t exactly mould in with the surroundings does it? Btw a Mosque and
minaret have to be higher than the surrounding buildings as a sign of Islamic
dominance, that’s one of the reasons the Swiss banned them.

I guess that’s why Christian churches have historically been the
same.

What is that on the left tower-an aerial?

The far left one is UHF TV. The taller one is almost certainly for DAB
reception although without knowing the exact sizes of the other objects it’s
tricky to scale it.

The left tower has a mobile phone array on the pole and an HF wire
between the towers – that covers both long distance, to mid east, and local
communications.

You could be right, without seeing it close up they could be phased
verticals at 1.8 Gigs.
If it is a mobile phone co the construction
standard looks a bit odd, they normally use steel lattice towers to meet
the wind loading requirements. Enough geekism before a raccoon chews
through the cable…

I thought a minaret was the pointy tower from which the wailing call to
prayer was emitted, not the mosque, as pictured.

Switzerland rejected minarets, but have many mosques.

Pardon my ignorance, but I’ve never understood what a ‘Minaret’ is. Is is a
miniature cigarette?

No, I don’t know what a minar is, either…

Can’t resist it, if you mean a minar bird – it’s a bird’s eye
view

A Bird’s Eye view is a packet of peas, isn’t it? I suppose those
round bits do look a bit like peas. The one in the middle must be a GM
version.