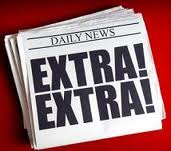 The Times: Waves of Destruction

The Telegraph: Nuclear Alert Amid Fears of Leak At Quake Reactor

The Independent: The Day That Shook Japan

The Express: Wave of Destruction

The Sun: Phew, What A Scorcher! Apocalypse!

Good to see people get their priorities right.

Hooray!
I have not the “only contributor ever to be so dull as to
attract no comments” Prize!

Sadly she is not an anagram. although many wish she and her annoying father
were. Which reminds me. Where’s my scythe…

A few years ago a relative brought back a lot of copies of the National
Enquirer from The States. I would hope that most people over there read it
like a Daily Mash for a laugh, but you wonder if a small percentage are fooled
by it.
Miley Cyrus sounds like an anagram.