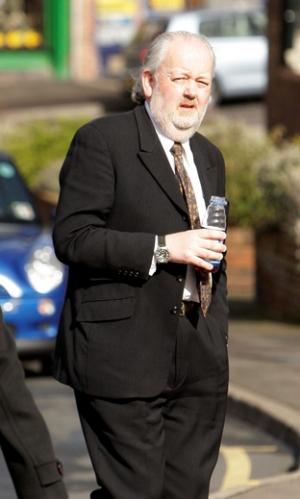 A Google search for Mike Dixon gives you a choice between a surgeon ‘in the largest breast unit’ in the United Kingdom, a professor of psychology in the USA, an Olympian sportsman or the former Liberal-Democrat parliamentary candidate for Kidderminster.

Yesterday, he was sent to prison for four months – before he even had the chance to become an MP. [Ed. – is this a record?]

The 53-year-old who was once a member of the LibDem Police and Crime Working Group [ominous!] grabbed Tipsy, the cat, after she scratched his grandson, and bludgeoned her to death with his walking stick.

Defence solicitor Fergus Maxwell describing Mr Dixon as a professional, family man of exemplary character said his client used the walking stick so that “he would be able to dispatch the cat very quickly. His intention was not to cause this cat unnecessary and protracted suffering.”

His wife and daughter in law heard banging before Mr Dixon returned to the lounge, looking calm and spaced out and said in a matter-of-fact way: “I’ve killed the cat.”

Are there any normal people attracted to a life in politics?

Got scratched by one of my cats yesterday. Claws were getting a little long
and hooking into the loop pile carpet, so it was pussy pedicure time (I’d
suggest getting your vet to show you the correct amount to take off so you
don’t cause the cat any harm). Once the procedure was complete gratitude was
shown in the normal way by digging into my hand and kicking into my stomach as
part of the getaway launch, drawing blood in both places. Didn’t occur to
either of us to beat her to death. Instead I got some iodine on the scratches
and she got some cream on a fingertip. It’ll be the same next time except
it’ll be Mrs Exile’s turn to hold the enraged furball while I do the
claws.

Prison seem disproportionate for killing a cat especially in the UK .Was it
a female and / or ethnic cat?

@ Jabba the Cat. Obesity+Beard = kiddyfiddler? You aren’t on the staff of
the Sun are you?

Do you not think it would have upset the child greatly to learn that the
cat had been beaten to death because the said child had complained/cried at
being scratched? Or does the child think “my grandad is important and he’s
gonna be a politician so if you mess with me, he’ll destroy you.” Also, why
did the cat scratch the child ? Children need to learn that animals should be
treated respectfully and if you poke them or pull their tails, they will
object in the only way they can which means scratching or biting. I don’t know
the full facts of this story, but Mr Dixon has set a very poor example to his
grandchild by his nasty temper.

There are cats that will scratch people unexpectedly, my sister had one for
years. You either allow for it’s behaviour, have it put down or re-home it.
Clubbing it to death is not an option – and I hate cats.

The relationship between Felis Domesticus (the domestic cat) and the law
extends thousands of years. In accordance with the ancient Egyptian laws of
the 5th and 6th Dynasties, the cat, or “mau,” was regarded as a sacred animal
(usually in the form of the cat goddess Bast or Bastet), and therefore
protected from harm by humans. Capital punishment was the traditional sentence
for anyone found guilty of killing a cat (Herodotus, Histories Book II). Even
as recently as the 1st century B.C., the Greek historian Diodorus Siculus
reported the killing of a Roman soldier who had been accused of causing the
death of a cat. LLRX.com
In Australia we send them to jail too.

That word you use, ‘exemplary’; I do not think it means what you think it
means…

And who’d have thunk he was a Lib Dem!

How did he cook it?

Personally, father/brother/son, whatever, if that had been my pet the
court would not have needed to sit. Unless it was to convict me.

He can expect a cordial visit from my mate Leo soon. He’s quite eager to
meat him…

Leo’s a prison visitor? Still, I suppose he has got experience of being
around crooks.

WTF? He seriously beat a cat to death because it scratched his grandson? If
he was being savaged by a rottweiler or something I could understand but for a
cat scratch? Yeah, that’s a proportionate reaction. Christ!

It’s probably perfectly proportionate if you’re a LibDem. Rather
surprised he didn’t try to eat the thing too…