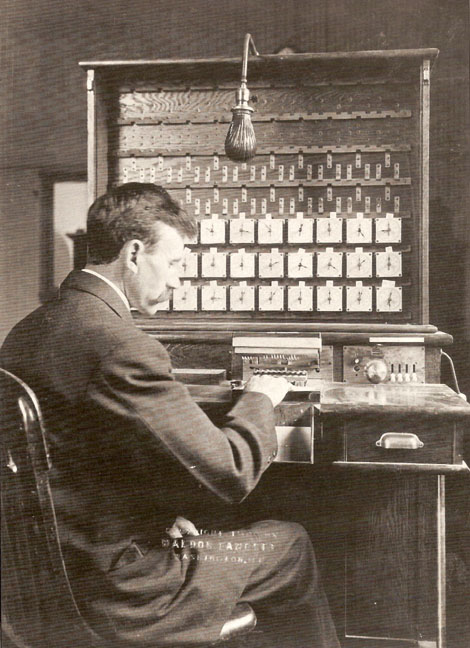 Back in 1970, an acquaintance of mine put an advert in the Daily Mirror. ‘What every young bride should know before marriage, full colour pictures, 230 pages of explicit step-by-step instructions, only £5.10s, sent in discreet plain cover.’

He made enough money out of that advertisement to buy a primitive punched card tabulating system. Not quite as primitive as the one above, but not too far removed. He used it to establish one of the first computer dating agencies and went on to become a millionaire.

The books he was sending out only cost him 10s each, but were sufficiently unusual in those days, with the Kinsey report on everybody’s mind, and copies of the Karma Sutra still rare, that lateral thinking wasn’t applied. Only after they had scurried down to the garden shed clutching their plain brown package did his customers realise that they were now the proud owners of one of the first all-colour cookery books.

I was thinking about this the other day after reading one of those ‘questionnaires sent to self referencing group turned into press release’ magically appeared as a news story. The questionnaire was sent out by one of the largest mortgage default insurance companies in Europe; they had sent it out to MPs who reported back to them in droves that if only mortgage companies would make more use of expensive default insurance, why every young couple, especially those who couldn’t tighten their belt to save a deposit could have a 100% mortgage again. With all their constituents in negative equity wouldn’t the world be a wonderful place once more?

When did the world change so that everyone should be able to have everything they wanted, as soon as they wanted, without any effort at all? I blame those early cookery books myself.

The post war generation looked in the fridge – if they were lucky – or more usually in the larder, to see what they had. They conjured up a meal according to the ingredients on hand. If the thyme had started sprouting in the garden there might be thyme to add to the rabbit stew, if not, there wasn’t. If the hens weren’t laying, you forgot about eggs.

Then an entire generation were urged to drool over colour pictures of what they might like, and exhorted to go out and buy those early green peppers – you had to, you couldn’t complete the recipe without them.

To this day I’m an ‘open the fridge’ sort of cook; one of the joys of living in France is the sheer seasonality of food. The markets are overflowing with fat mussels right now, 2€ a kilo, and the last of the leeks need lifting to make way for the new potatoes – why would one want to eat anything else? Jamie Oliver would have me scurrying down to Sainsbury’s to buy out of season Cranberries.

We were the generation that grew up in unheated houses; at least until the coal fire was laid. We untied and saved string from parcels, ironed the Christmas wrapping paper for next year, made our Christmas decorations from strips of coloured paper. I still own a darning mushroom, though it is years since I saw a pair of socks worth darning; perhaps I shall have to start knitting them again, I still remember how, you start by unpicking Dad’s old socks, rewind the wool, take four needles….

We didn’t take week-end breaks in Calais; a hen night was five friends in the snug, not a plane load of screaming women in Prague; credit cards were unknown. A mortgage was something you envisaged ‘one day’, after years of assiduous saving with the local building society, with marriage an essential step on the way of proving yourself a steady, reliable and worthy person to the ‘manager’.

Someone who owes an obscene amount of money told me the other day how they had bought a £250 pair of shoes not long ago – they needed ‘cheering up’ they said. Their indebtedness was getting them down.

Another friend told me that their monthly mortgage payments had dropped from £950 to £400 over the past couple of years – ‘Crikey’ I said, ‘you could pay off your mortgage entirely in 7 years at that rate’; they looked at me as though I had grown two heads. ‘Why would I want to do that’ they replied, ‘I can afford a BMW now’. This morning they told me that it had just cost them £96 to fill the tank, and at that rate they ‘couldn’t afford to drive to the supermarket’.

I blame those early cookery books – can anybody else pin point the moment when aspirations outgrew accumulations?

I don’t think there was a particular point at which aspirations outgrew
accumulations, more a campaign by the moneylenders to normalise debt, so that
people whose parents would have been horrified at the idea of spending their
life in debt, accepted this state of affairs as absolutely normal. I remember
when the first credit cards came out; “Take the waiting out of wanting” was
the slogan. The bank sent one to my mother who cut it in half and rang the
bank to complain. She said it was immoral to encourage people into debt. All
this was so that the moneylenders could make more money, but it had a more
serious consequence: the easy availability of credit started to push up house
prices and the rise in house prices became a bubble. The net result of this is
that all the spare cash of the moderately wealthy, that same spare cash that
financed the Industrial Revolution, is all tied up in repaying loans.

“they had sent it out to MPs who reported back to them in droves that if
only mortgage companies would make more use of expensive default insurance,
why every young couple, especially those who couldn’t tighten their belt to
save a deposit could have a 100% mortgage again”

Well, of course. Because the default insurance (if it’s the same one I’m
thinking of) indemnifies the lender from being out of pocket should a mortgage
go into default.

It doesn’t, however, absolve the borrower from their responsibility to
cough up even though they paid the premium on behalf of the bank.

I’ve always seen this as a quite hideous scam, myself.

“”“We were the generation that grew up in unheated houses…”

And were all the healthier for it!””

Well yea, cus the unhealthy ones died.

Mum still reminisces about moving to the UK from war-torn and then
communist-trashed Poland, where central heating was standard, and finding that
houses were “heated” by fireplaces. Not even stoves. Fireplaces. We used to
put on our jackets when we came into the house. If your house had double
glazing or central heating , it was worth mentioning in the advert if you were
selling. (I still can’t work out why the British never went in for heating
stoves.)

The second place we lived in the UK did have central heating – in the
stables.

It’s proof of Darwin’s theory, we skinflints survive the current conditions
better.
Deep pockets, short arms and a moth colony in the wallet.

I like getting stuff all the year round? Is that really such a bad thing? I
also have a wife who is a real fan of central heating!

There’s a difference between good stuff – I refuse to call it “progress” –
and people acting like there’s a money tree in the garden. But remember those
bits of the old story – having to wait for a mortgage and only getting one
when asked a series of intrusive and largely impertinent questions? And
waiting six months to get a telephone installed? And buying stuff on tick –
Britain’s agency mail order business was built on the availability of credit.
I could go on but shan’t – for all the debt and “must have stuff now” we
critise, the place is a whole load better for us consumers.

Despite the best efforts of governments, vicars, social workers and
assorted busybodies to make us all feel guilty about it!

You call yourself a consumer if you want to. I’m a customer

“We were the generation that grew up in unheated houses…”

And were all the healthier for it!

House! You were lucky to live in a house! We used to live in one room,
all twenty-six of us, no furniture, ‘alf the floor was missing, and we were
all ‘uddled together in one corner for fear of falling.

[ read somewhere]
I was there at the beginning of computing.
Everything was just ones or zeros.

You had ones, ones …

As will the next generation if they don’t stop building bl**dy windmills
and build some power stations instead!

I think it’s less a moment, or a era, that changed things. I suspect it’s
more to do with attitude of mind and human nature.

There are still plenty of people around for whom enough is plenty – they
pay off their debts as soon as they can, they own a house that’s big enough
but not showy, a car that does the job but isn’t flashy; they’re often quite
happy people, content in their own skins, often the sort involved in voluntary
activities or constructive hobbies, people who have achieved what they wanted
to in life. You don’t hear much about them because they’re the silent
majority.

This is a sweeping generalisation, but the type of people who want
everything and want it now are sometimes trying to compensate for personal
insecurity – the “because I’m worth it” type. Maybe they haven’t found a niche
in society in which they feel they can earn some respect, or feel they deserve
more respect than they get. I’m sure this will get worse, as education fails
to instill the essential truth that it takes effort and application to achieve
anything worthwhile.

In more cynical moments, I wonder if the phrase ‘because I’m worth it’
will be analysed by future sociologists as the pebble that started the
landslide.

What are credit cards? Can you use them for getting the soil off the
carrots and parsnips?

Not sure about the carrots, but they’re very good at getting frost off
car windscreens.

The post-war spread of socialism. The stuff we didn’t decapitate and stuff
back into the incinerator from which it morphed, in, oh, about 1880 at a
first-stab, I’d guess. The “rot did set in, but it took quite some time”. (A
rather quotable Enoch Powell phrase, that one.)

Then, of course, everyone who hadn’t been killed in 1914-18, and lived
throught 1939-45, believed the “free money for ever, for all” nostrum peddled
in June 1945 by the Nazis, who then got into government and sacked Churchill.
Even my father, a late-30s-Doctoral-student at Imperial College, who joined
the RAMC and served out the entire war, voted Nazi.

Of course, the money would come from “the rich”. Nobody would suffer. (But
they still put stuff on ration in 1945 that wasn’t even rationed in the war.
So that “the rich” could not buy it all up by force and eat it in front of
your children while making them watch. Evelyn Waugh did terrible damage to
liberalism, him.)

Sorry to be Jamie Oliver apologist, but his books are generally full of
wherever possible buy ‘in Season’, so a bit harsh to use him as an
example!

Anyway agree with the point, everybody wants everything now and worry about
it later, as someone that has benefited massively from low interest rates, I
have been paying down what little debts I had and investing like crazy while I
can afford to.