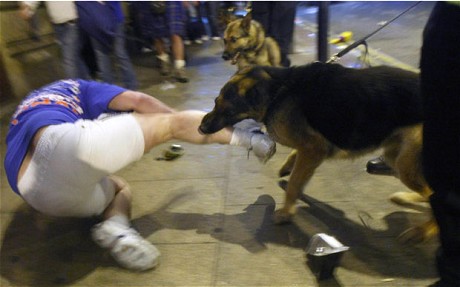 What is a dog – other than something with four legs and a tail?

Either a pet or a working dog, yes?

If it’s a working dog, it’s got a job to do – finding something or stopping someone or something going somewhere it’s owner doesn’t want them to go?

So, a police dog would be a working dog, with four legs and a tail that was supposed to stop someone going somewhere?  How is it supposed to do that other than to bite them – am I being naive?

I must be. Last year 2,725 suspects were bitten by police dogs. Good dogs, obviously?

Then why has ACPO just announced that they have paid out £770,000 in compensation to them for getting bitten by the naughty doggies?

I can understand (possibly) the ’155′ members of the public who got between the dog and his quarry and received compensation for getting bitten, but the 2,725 suspects – that leaves me baffled.

What is the dog supposed to do? Just ‘woof’ at them?

Folks who walk their dogs where we walk ours have a Jack Russell x Shitzu.
They call it a Jackshit.

Yip, but you have to admit he’s Shar P,ei?

I thought he was much bigger …

It’s a bone of contention.

These comments are apawling, they would even have bored a collie.

He’s back, and this time it’s pawsonal
You ain’t nuthin but a pound dog
(compensation claims)
Speed humps (complaint from female police dog)

I think I hear the rythmic banging of La Raccoon applying her head to the
keyboard.

I didn’t witness the event myself either – I was reading Pinscher Martin by
William Golding and listening to Basenji and the Jets by dear ol’ Elton.

I was at the theatre watching Pugmalion by St Bernard Shaw that night.

Heard about the two Boxers eyeing up the French poodle?

The Dogs of Phwoar.

No, but I did hear that a front-runner in this year’s Crufts flounced out
of the Toy Dog section in a fit of Peke.

That’s exactly why I’m so delighted you’re back….

All police dogs must follow EU procedures. When approaching a suspect, a
verbal warning is essential, followed by an assessment of the H&S risks of
any intervention. If necessary, sitting on the suspect may be justified after
further form-filling in triplicate (only applicable for small suspects &
big dogs), but biting is banned, as someone could be hurt.
The old adage,
“his bark is worse than his bite” has never been so true.

(Where’s Gloria with the puns when you need her?)

This is what you call a dramatic paws.

The answer may lie in the number of those suspects who had done nothing
wrong. Do we have that data?

Probably not. But we may have once all the census forms are returned!

Somewhere in the region of 60 million, I would suggest.

To hell with police dogs, we need to start training up some police cobras.
See how many ask for compensation then.

If they, the dogs, were big enough they could do what my Newfoundland tends
to try and do – knock then down and lick them to death while standing all 50
kilo on them.

If they are young children then he lets them sit on him as long as they
don’t pull his tail.