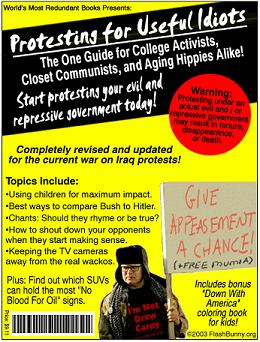 The best description yet of left wing intellectuals who might have lots of intelligence but no common sense, no reason and no morals. They are so keen on supporting their socialist brothers that they will happily ignore their brother’s ethical lapses. There are easily blinded by wodges of money being handed to them thinking it’s because their brother believes in their cause. Most of the time their non-ethical brother is more interested in the veneer of respectibility and other benefits they get out of the association and just see it as a cost, just like buying a new coat, than they are in joining in some socialist utopia.

More often than not, the person handing the money over is manipulating the idiot for their own purposes. The naive recipient will think they are equals and publicise their mutal arrangements, however only others in their clique will believe it. Everyone else will see that they are being used.

Sometimes the useful idiot totally believes that that the other person is on their side and will do anything that’s asked of them in the belief that it is the right thing to do. Other times the idiot will think that they are the main beneficiaries of the arragement as they are lead to believe that they will be well rewarded and have a say in how a country or organisation is run when the other person reaches the top of the political ladder.

Understand plod used to call the place, ‘The London School of Comics’,
owing to the hare brained lefties that they used to have to monitor there in
more revolutionary times.
Presumably now the self detonating community
are involved, it would be racist to monitor them ?

One of the biggest undiscussed problems that the developed nations face is
that their economies are heavily dependent in oil. About 95% of the UK’s
energy use (domestic and industrial heating, transport fuels, electricity
generation) is wholly dependent on oil and gas. Despite the naive witterings
of the Green lobby (who have spotted the problem, but haven’t really thought
through the solutions they are espousing), that won’t change soon (unless
we’re prepared to revert to a pre-industrial economy), so we have to maintain
oil supplies for some decades yet. Much of the oil is located in some
politically dodgy countries, so that means a foreign policy that might not be
as squeaky-clean as some might like.

I can understand where you’re coming from, SBML, but I suspect that the
Libyan situation might be more complicated than it first seems.

Working with Libya because they have oil doesn’t mean that we have to say
that what they do is right and moral in our own eyes. We can acknowledge
that they are nasty but real life is full of such difficult decisions. For
instance I might occasionally shop as Tesco becuase they are the only
nearest supermarket and the cheapest even though I might totally hate their
ethical attitude.

You can still keep your eyes open whilst working with nasty people, you
just have to have your back covered. Being an idiot means who don’t plan for
any problems because you never think there will be one.

I see what you’re saying, and don’t really disagree. However, I can’t
help thinking that there’s a lot more to learn about our dealings with
Libya. If you’re going to trade, you have to have something to trade with
– the UK wants access to Libya’s oil reserves, so what do we have that
Libya wanted at the time of negotiation, and was it a price we should have
paid?

Given the general world situation with regard to oil, the political
instability of oil-rich nations and events yet to unfold, I would not
surprise me in the slightest if such situations were to arise again in the
future, under UK governments of any stripe. They’ve got the oil, we want
it, and they know it. They’ve got a very strong negotiating position, and
the price they demand may not be entirely to our taste.

SBML – Funny you should mention that – your top Cat has also had a poke at
these avaricious, starry-eyed buffoons:
http://caedmonscat.blogspot.com/2011/03/cyrene-and-herd.html

A bit like the relationship between the current government and aggressive
corporations?

There seemed to be a very close relationship between the last government
and ‘aggressive corporations’ as well. The easing of bank regulation, for
example, lead to some very unfortunate unintended consequences, except
perhaps for ‘Sir’ Fred Goodwin.

I sometimes worry that caring about liberty and web activity is actually
playing into the hands of an unseen, higher level of Net conciousness, so we
are all “useful idiots” in the final reckoning.

Yes, quite so. One might add that in the more recent past in Britain there
are a host of useful idiots amongst the so called intelligentsia, eager to
promote out of some weird anti imperialist guilt complex everything which is
the antithesis of the values of freedom tolerance which allow for their
existence and promote and protect radical Islaam, or the foundations for it.
Quite what they will do when the radical mullah bursts down the door on the
Primrose Hill dinner party and demands “convert or die” and that Daisy shall
no longer go to school, but shall sit at home and marry her cousin, we shall
find out – I suspect in my later lifetime, but I shall perhaps allow myself a
bitter laugh from my cell.
G the M