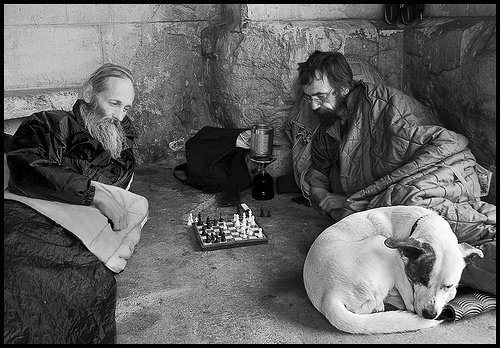 I always knew there was a very good reason why I had no ambition to be an employment lawyer. It meant grappling with the likes of The Transfer of Undertakings (Protection of Employment) Regulations 2006 or TUPE as it is known affectionately by those who ply their trade plumbing its impenetrable depths.

TUPE owes its conception to the in-vitro services of the Acquired Rights Directive ejaculated by the European commission in 1977. After a suitable gestation, Britain gave birth to TUPE.

It sounded good – the regulations were designed to protect the rights of employees when ownership of their employment was transferred to another party. You may wonder where I am going with this – follow me on a gentle meander…..

Darlington Council, as part of the Local Authority cutbacks, announced that they were cutting in half the number of beds they provided for adult ‘homeless’. They didn’t actually provide those beds themselves; they had a contractual arrangement with the Salvation Army and another local charity to do so. They merely provided the funding. Now the funding was to be slashed in half – ergo, either each charity got half the funding or half the number of beds could be provided – someone somewhere was going to lose out.

Now one of the ‘upsides’ of the Big Society is that there is less scope for the Human Rights legislation to intervene – the Human Rights Act only binds public bodies and companies providing government services – a very grey area, prisons are accepted as being a government services but care homes are not, so one of the upsides of the Big Society shift away from Statism is that we should see less of the headline cases whereby individuals are awarded massive sums for infringements of their ‘human rights’ – pace the £203,000 award to a gypsy warden for ‘stress’ arising from his work – he was able to claim because he was ultimately employed by Hereford and Worcester council.

However, a glaring ‘downside’ to the ‘Big Society’ has been revealed by the outcome of Darlington Council’s decision to cut their funding. They issued a new tender for the provision of hostel accommodation. This time for a total of £190,000.

A small local charity, the 700 Club, headed by the Reverend Dr John Elliston, decided to enter their own tender. Both the Salvation Army and the 700 Club had previously provided half the bed places each – now they were in a race for the slashed budget.

They were successful – hurrah! Small local charity to provide small local service to homeless people – the very epitome of the Big Society.

Except that big national charity – to wit the Salvation Army – didn’t take too kindly to being ousted in this manner. With their homeless facility at Tom Raine Court now surplus to requirements, they informed their employees that they wouldn’t be paying any redundancy payments because under TUPE legislation, they felt that the little 700 Club were liable.

Yesterday a Newcastle tribunal upheld that view. The 700 Club, small local charity, must now hand over £250,000 to the Salvation Army as the price of having won the tender to help the homeless in Darlington – it dwarfs the contract awarded to them by Darlington Council and risks wiping out the Charity.

Dr Elliston said the legislation undermined the principles of the Government’s flagship Big Society concept by putting smaller organisations at a disadvantage when competing with larger counterparts.

“At a time when Government is urging a greater dependence on voluntary organisations, this judgement must stand as a cautionary warning,” he said. “Any organisation that says yes may quickly realise that the chalice they now hold is a poisoned one.”

Presumably if the Salvation Army had won the contract then they would have been liable for the redundancy payments for the 700 club staff. Meanwhile, there are still only half the number of homeless beds…..

Last time I was made redundant, it was because the company lost the
contract I was working on to another bunch of shysters – but I don’t think the
new contractors coughed up in our direction.

*That is seriously weird legislation if another organisation becomes liable
for someone else’s redundancy payments. Very unfair. I’m afraid they can ratle
their tins elsewhere from now on.*

If you hire a cleaning company, and sack them because the workers are
useless.

The new cleaning company you hire is obliged to take on the workers.

We hear alot about “opportunities” for charities. Before we all get excited
about becoming CEOs overnight and have grand ideas of take overs, mergers and
aquisitions it would be advisable to seek some sound legal advice. take overs,
mergers and aquisitions always end in cost and yes, in tears.

So really, Glynwed should not have paid my father’s redundancy when they
shut the foundry he worked in, it should have been Bartol Plastics or one of
their competitors because plastic rainwater pipes were much cheaper than cast
iron.

Forgive me ifI’m a bit thick but if the jobs aren’t being transferred from
the Salvation Army to the 700 Club how can the 700 Club be liable under
TUPE?
I assume the 700 Club have sufficient staffing levels to support the
bid they made.
Am I missing something here?

I think your calculation is a bit off.

Meanwhile, there are still only half the number of homeless
beds…

I calculate it this way. The council will provide enough funding for half
the number of beds. The 700 club win the contract so there are half the number
of beds.

The Salvation Army then sue the 700 club for much more than they were
awarded to provide the half-number of beds, therefore…

…as a direct result of the actions of the Salvation Army, there are no beds
for the homeless at all. What a marvellous result for this allegedly Christian
organisation.

I used to think they were one of the few honest charities left out there.
Now I’m wondering if there are any honest ones at all.

When you see the growing list on fakecharities.org you quickly get an
impression that there very few real charities around. RNLI is one of the
few.

Nice to see the Christian ethic of the Sally Army has stayed with them
after all these years.

It’s seriously broken legislation – does some good things when business is
genuinely transferred on takeover or merger, but not in a case like this, I
hope they appeal and win.

Another silly example – a company was not satisfied with the cleaning
contractors, so terminated the contract and hired a different company. The
first contractor found out who it was, had the cleaners transferred to new
contractor using TUPE so the company ended up with the same unsatisfactory
staff doing the job.

As a former HR Director, let me reassure you that this is exactly what
happens in pretty much every case of TUPE. You frequently acquire overpaid,
underachieving employees and have to spend the next two years finding ways
to resolve the situation. This is much worse in transfers from the public to
the private sector; public sector activities are generally 50% overstaffed
in my experience which makes everything more difficult.

There are legal ways to deal with this, but it involves a lot of work,
time and unpleasant conversations; hence why most companies don’t bother,
just wait for the employees to leave of their own accord. Unfortunately some
superglue themselves to their seats…

That is seriously weird legislation if another organisation becomes liable
for someone else’s redundancy payments. Very unfair. I’m afraid they can ratle
their tins elsewhere from now on.

what it really highlights is the ridiculuous situation you get when
“charities” contract to provide regular services and act as pseudo
corporations. I suppose you might also argue that the logical place the rights
transferred to was the Council that contracted with the charity in the first
place. Which then goes on to demonstrate why we think what we think of
lawyers.

Have the bar staff given permission for their photos to be shown?
*ducks
and fills in deed poll*

They’re lucky they didn’t get fired for playing chess on duty…….

I can’t understand why bloggers aren’t being more critical of the Big
Society.

Probably because its the only suggestion anyone has made, which may
ultimately reduce the bureaucrats relentless empire building at the
taxpayers expense ? ( Although based on my local town hall, they seem to be
fighting a pretty effective rearguard action, and quite prepared to scuttle
every public service before a single man jack of them looses their job.)

My guess is that, had the positions been reversed, the Salvation Army would
have simply squandered yet more money on lawyers to avoid paying the 700
Club…

I’ve said it before, and I’ll say it again – this is the sort of corporate
behaviour that would provoke anguished columns in the left wing media, yet
when a big charity does it, they all pretend not to be looking.