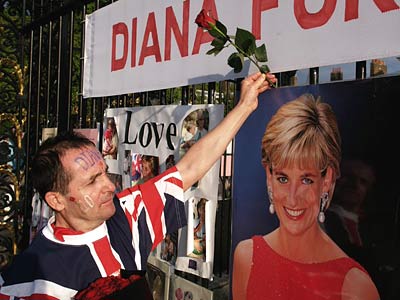 Seven years after the death of Princess Diana sparked a national outpouring of grief in floral format, tightly bundled in the non-biodegradable ‘wrap’ that florists use, rather than true cellophane, the ‘future compost’ tributes were still being placed outside Kensington Palace.

It took volunteers three weeks to clear the original mountain of soft toys and messages of affection from those who had never met her. So dramatic were the images of those flowers that they set the British tribe onto a new path of grief tourism, whereby we celebrate the passing of others that we never knew with public offerings of garage flowers and nylon toys from China accompanied by messages, tortuously scribed by those more used to texting – ‘U wuz R soldier LOL’ – left, not at the grave, but at the last place known to have been frequented by the departed – future anthropologists will have a field day deciphering the meaning behind all this.

Facebook has taken its rightful place centre stage in this virtual grief experiment. The Facebook tribute page is de rigeur for the aspiring corpse. They are now so popular that they even have their own specialised form of Troll, the better to abuse the passing mourners.

No wonder then, that when a 16 year old lovelorn lad committed suicide, his virtual girlfriend turned first to set up a Facebook tribute page, soon graced with some 2,000 members, none of whom had ever met him. No matter, his girlfriend had never actually met him either: theirs was presumably a ‘sex-text’ relationship. He had, in the way of this modern world, apparently over-imbibed a combination of Vodka and Mephedrone.

The thousands of grief tourists were a tad puzzled though – clutching their ecologically unsound floral offerings and their purple teddy bears, they searched in vain for a suitable lamppost to leave them under. Where did he drink the vodka? Was there a railway bridge that he had spray painted with his signature? Surely he had sniffed glue in some shopping mall? His girlfriend was equally puzzled.

By this time the town’s garages were bereft of 10 day old tulips; there was not a ‘My little Pony’ with ‘attached hearts’ to be had anywhere. Wholesalers were shouting down telephone lines to mainland China to reorder supplies.

Somebody called the police – as you do when you can’t find the can opener/the cats been sick/you don’t know which Donner Kebab shop is open on a Bank Holiday/you are a virtual mourner in search of a virtual shrine to lay your offering for a virtual friend.

A curious tale unfolded. The corpse was as virtual as the virtual friendships.

Jaydon Rothwell, virtual corpse, had never existed except in the minds of two Facebook aficionados. They had created his identity to ensnare a friend of theirs into a virtual relationship, when that had failed, they had ‘killed him off’, his unwitting grieving virtual girlfriend had created the Facebook tribute page, and thousands of grief tourists had just tagged along for the ride…..

Police Inspector Ilyas Mohmed said they were considering whether to take any action against the girls. “We have worked extensively on this inquiry and this has led to a lot of officers’ time being wasted. We find these actions to be unacceptable and this kind of prank will not be tolerated. We will take action against anyone involved in this sort of behaviour in future.”

Any suggestions as to what future Mourn-ographers might be charged with?

Truly a tale of our times.

This reminds me of a great play on Radio 4 (based on a book, probably)
about a pair of boarding school boys returning after the summer hols who
invent a schoolmate who won’t be back because – tragically – he died.

The other boys are so taken in they soon remember their departed pal who
never was, and eventually the school authorities remember him too, sending
condolence messages to his imaginary grieving family and holding a memorial
service.
The pranksters recruit a pair of actors to play the deceased’s
relatives.
Can’t remember what it was called – anyone else know?

Police Worked Extensively!! What could they be possibly by doing.

No f**king wonder they cannot solve crime and catch real criminals they are
idiots. I would love to see the paperwork for this investigation.

***Advice for Blackburn Police***
Man is dead in Blackburn, you are the
police and want more information….

Call the Coroner and ask him for details on the boys death. There is only
one Coroner in Blackburn area.

***Instruction for Blackburn Police on making a phone call***

Pick up phone. Press numbers on dial-pad for Coroner’s office. Place phone
to ear. When person on other end answer’s do the following.

I have run extensive tests with my 3 year old using his Fisher Price phone,
as an adequate replacement for a Blackburn Police officer. The entire process
took 1 minute.

We can at least be thankful that the fake person was not a black vegetarian
Muslim asylum-seeking one-legged lesbian lorry driver or the girls who created
the Facebook page may have faced a Firing Squad.

Perhaps they could be sent to a cyberprsion and then break out with a
virtual nail file and a cyber rope. Then they could run away in a cyber
spaceship and live happily ever after.

Excuse me, I’m going to lie down in a darkened room.

Good thing they can’t prosecute me for all the “dead” spoof-characters I
created and then abandoned on fora across the internet through the
years!
Or the real-life (?) famous folk I purported to be just for a cheap
laugh, or their fictional counter-parts I also temporarily stole for fun.

Part of me wishes I’d thought of a spoof tribute page on Facebook….it’s
such a temptation!

A tribute page to a virtual character?

We have to go deeper. Just don’t forget your little spinny totem. I gather
Ilyas Mohmed is gathering evidence against DiCaprio’s psychotic dead
subconscious wife as we speak.

*Any suggestions as to what future Mourn-ographers might be charged
with?*

The one thing they certainly can’t be charged with is Actual Body(ly)
Harm.

This is the Mourning of the Age of……credibility (Hippy song with a rap
beat, no need for rhythm or even to make sense)

The crime of course – operating a cel phone without due care and attention-
a real money earner for the constabulary if ever I saw one, you could clear
the national debt in six months with that one.

I was going to say: absolutely incredible but sadly it is not.
I
remember watching the Diana crowd & wondering why I couldn’t hear any
ululating.
The antics of Royalty are no less a soap than Eastenders &
the rest of the circuses to which the good people of Britain have become
familiarly & personally attached…and the technical progress in the
communications industry has left people unable to distinguish reality from
what has become a nightmare.
Added to that is the breakdown of the nuclear
family to such an extent that fictional close relationships are an easy &
self-convincing substitute…’all those lonely people, where do they all come
from.?

This Is The Mourning Of The Age Of …

Funny, Gloria. Standing in the waiting room at the Vets yesterday,
glancing at the covers on the ‘Celebrity’ magazines provided for my
delectation, Despair was the emotion that sprang to mind.

I’m confused: how much should I inflate and deflate my lungs? When is the
best time to do it? Are you trained in offering such advice? If not, I think
its unacceptable that you publish such important information and toy with
people’s lives like that.

Surely they only corpse on display here is that of poor old Mr Common
Sense?

Along with that of Mr Sense of Proportion and Ms Stiff Upper Lip.

Blimey! We’ve got a serial killer on the loose!

Cereal killers? I believe there is a high-level conspiracy, probably
the Freemasons in the police, to cover-up the murder of John Barleycorn .
People are even singing about it. What more evidence do they need before
they investigate?

The Cock Robin killing is a scandal because although the Sparrow
admitted the murder and the Fly witnessed it there was not even a Police
investigation, let alone a trial. I can’t find anything on wikileaks
about it so it couldn’t have been arranged by the World Jewish
Conspiracy.

Hmm.. this incident seems to illustrate the unbounded bovine gullibility of
a growing number of members the Great British Public. It’s a paradox that the
stupidity factor appears to be proportional to the sophistication and
efficiency of the means of mass communication. Perhaps our EU-backed social
engineers and propagandists with their NLP psychobabble malarkey are onto
something…

This is it. A kind of rampant and terminal idiocy has gripped the nation.
It could be the beginning of the end. At what stage do people just become too
thick to survive? At what point does the mere act of inflating and deflating
ones lungs become too much for the modern mind to comprehend.

I’m pretty sure we’ve reached peak evolution and the only way forward is
backward (if you know what I mean) into the primordial soup.

The internet was the tipping point.

greenshoes wrote:
Should the Police not have found Jaydon Rothwells
address and checked if this was actually true before working extensively
(their words) beforehand. Would that not have been the sensible thing to do.
This however does not excuse these girls stupidity and lack of thought for
others.

To which great harwood replied:

the police would still be looking for his address now, BECAUSE HE IS NOT
REAL! merely a figment of the girls imagination with a random picture of an
unrelated person on the profile.

The trolls have now set up a tribute page to the fictional Jaydon’s
profile. They are winding up the people who have rushed over there to say it’s
terrible and the police should force Facebook to shut the page.

The moderators are going nuts and trying to clean the comments, but I think
they want to leave the page because if they don’t, there will suddenly be a
tribute page to the tribute page of the fictional Jaydon Rothwell.

Cripes, it’s not just a rabbit hole; it’s a swirling recursive vortex
capable of sucking the entire internet back in to itself. Quick everybody!
Grab hold of something solid in reality and hang on for dear life.

It’s sucking everything in!!!

Clearly the readers of the Blackburn Times think that the police time would
be utilised usefully in prosecuting them. No crime has been committed, yet it
is “unacceptable” the catch-all for thought-crime we see daily in modern
Britain. That’s enough these days, it seems.

Sorry, that should be Lancashire Telegraph. Mea culpa.

And it’s not even 1st April.

They ‘killed’ a fictitious character and the law got its knickers in a
knot? That’s Ruth Rendell and Val McDermid out of a job then.

Is the f*cking EU anything to do with this lunacy? It wouldn’t surprise me
– or is somebody just a month fast?

No, he killed himself. It’s so sad.

No doubt they will be charged with ‘using their imaginations’ or something
similar.

It’s interesting that on the same day, JuliaM has another story of the woman who cried ‘rape’ and
who won’t be charged with anything at all.

I suppose ‘Facebook Crime’ is a good substitute for those police officers
who find real crime a bit difficult to deal with.

Yes, this is an utterly bizarre story, isnt it?

What action? What’s the crime? And how do they justify police manpower
spent on it?

Perhaps it’s another job for The Cyber Squad..?

How is it different to someone on a TV soap dying? It’s all fiction, no
one got hurt.

I suspect a good defence in court would be to ask why the police had
caused even more wasted time by pursuing the case.