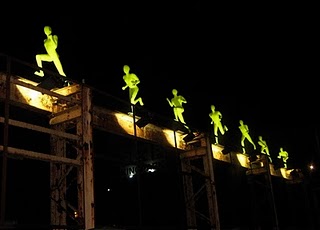 In some sectors of Liverpool – OK, Scotland Road – the tradition of ordering a ‘chinky’ and then legging it without paying, is so deeply engrained that one restaurant which sought to curb this, for them, unprofitable activity, instigated payment in advance.

They still had to keep the doors of their restaurant locked – the habit of ‘legging it’ was so automatic to their customers that some of them were paying and then taking off without eating…….

How appropriate then, that the sculptor Faith Bebbington has chosen to immortalise seven fleeing figures for the ‘Liverpool Discovers’ exhibition of public art which opened yesterday.

I am happy to say that none of mine ever legged it from a Chinese
Restaurant. OK they never went to one, but that’s a question of lifestyle. But
Lyons teashop, well that was another matter entirely.

At the risk of ‘doing a Boris Johnson’ :-

A F1 team needed a new pit crew. There was a lot of candidates for the job
– a German team, an Italian team and even a Scouse team.

Each team had to change the tyres on a racing car, and the fastest would
get the job.

After a short debate, the jury reached the verdict:

The Scouse team members start to complain “What? The Germans? We finished
before them! How can they be faster?”

The head of the jury steps in and says “It’s true that you Scousers
finished changing the tyres 2 seconds before the German team, but we did not
like the fact that you also resprayed the car, and ,changed the license
plates.”

???????
Was he of Irish blood? That would explain a lot.
Friend of
mine was telling me, at a wedding as it happens, that there’s been a gene
identified as the cause of alcoholism in the Celts/Irish. Dunno if he’s right
or not. Certainly our Classics tutor in Adult Ed, says , I quote, “The Celts
have a Thirst.” i.e. for alcohol. Summat inherited, aparrently.
Sorry, I
can’t stay, being comandeered by the cat and the wife, the cat’s on the
keyboard making me type ever so slowly and the wife’s calli

Course he was of Irish blood – came from Scotland Road didn’t
he?!!!!!

Okay, I made a blunder, not knowing you well enough is my mistake!
All
is forgiven. Sorry for the angry post, but you can’t deny, we were indeed
slated and trashed by Thatcher’s soldiers, and it’s done certain damage that
even Blair’s pro-Liverpool ideas haven’t really cured.
Concerning
arguments, well, would a bottle of Southern Comfort suffice?

That’s OK Scouse – divorcing the Scouser was more than adequate
compensation for all past and future Scouse rants.
I do a good rant
myself as it happens, pity I didn’t get the opportunity this time!

I’m sorry, but despite the great respect and admiration I have for this
blog etc, I’m not happy about this post. It is just not true that
Liverpudlians are all theives and scrouyngers etc. I’m afraid I find it
grossly offensive, a copy has been printed out and I’m posting my first
complaint here. I politely request it is taken down.

Scousemouse, if you wish to debate the honourable characteristics of the
inhabitants of Scotland Road, whence I restricted my remarks to – do you
want the half hour debate or the full three hours? (Note, I do allow a five
minute interlude during which you can but try to get a word in
edgeways.)
I married one, I lived there – I know!

How to challenge a view, Scousemouse. Produce verifiable facts,
preferably with a link to a respected and unbiased site, and keep it
relevant to what’s been said. You’d then be respected and we’d be
humbled.
To immediately issue a threat without proving your argument
causes the opposite of my third sentence.

Oops, never post without reading the whole thread. Er is it possible to
pardon someone and stick his head back on after the executioner’s done his
work?

Needle and cotton on its way over Livewire – catch!

Hmmm, well maybe that post should be spoken a bit gentler, but it seems the
poster is not happy about some things. You really have to be careful, if you
write off a whole city as, in so many words, all scumbags, etc.

Hmmm. Concerning that word, I will let the arrogant PC brigade decide on
that.
My old mate, Tommy Ling, thinks it’s funny!

It seems that London and Nottingham and Newcastle and Glasgow are more
violent than Liverpool. Thatcher hated Liverpool, and the cabinet of the day
was biased against it. The ‘Pool produced revolutionaries, it seems, like John
Lennon and his generation. They had to be smacked down hard, so the press
launched a long term vendetta against the place.
Succeeded, it seems too,
not just with right-wing, hate-filled, bigoted old cunts, either, but the
whole spectrum of Cowans.

“The ‘Pool produced revolutionaries, it seems, like John
Lennon…”

I don’t have to repeat the old joke about Lennon and the lyrics to
‘Imagine’, now do I?

In the spirit of Ken Clarke I’d let it be known that the food contains
snake venom. The antidote is given when payment is made.
COBRA could be
convened to discuss it.

I hope those statues are well bolted down…

Or wired up to the National Grid…..

Running away and not paying for the meal. Silly question, but are you
talking from personal experience?

Best not answer. Together we might start a new deviant trend that could
extend beyond the boundaries of Liverpool

It’s not made of recycled hubcaps, is it?