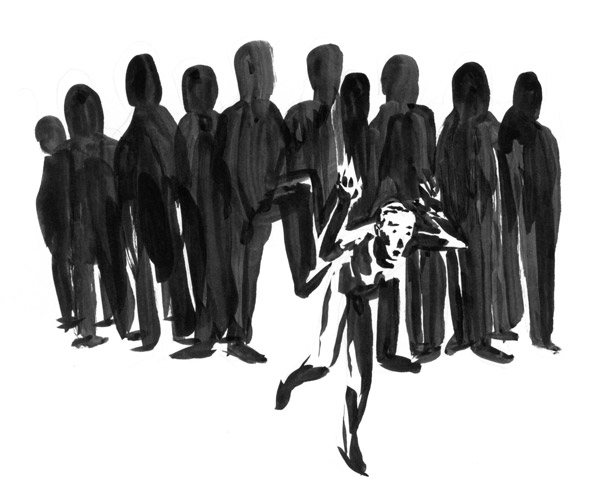 Andy Coulson has been forced to resign for a second time – apparently for the heinous crime of not ensuring that he was charged by the Metropolitan Police for conspiracy to infringe s 55 of the Data Protection Act 1998 whilst Editor of the News of the World.

It is a curious witch hunt on the part of the Guardian; no blame attaches to Sir Ian Blair who was the Police Commissioner at the time of the first investigation, he rarely gets a mention these days, although he was once the darling of the Guardian for his ‘progressive policing’. It is normally the person who fails to gather sufficient evidence to prosecute a crime that bears the blame when it is imagined that someone is ‘walking free’.

Nor is there any reference to the fact that journalists have for many years employed dubious methods in order to obtain information which might lead to front page stories.

It is as though ‘phone hacking’ – the hacking description having been more than adequately debunked by Dizzy – is somehow in a class of its own. It may well be that the only class of its own was the one by which the NOW obtained scoops which somehow eluded the Guardian. They are, after all, perfectly content to publish material which has been obtained illegally, young Bradley Manning remains incarcerated as testament to that.

I have written before of my involvement in the trade of illicitly obtained information. I might just enlarge on that to illustrate the matter.

Back in the early 60s, when the Guardian was still based in Manchester, I worked for a number of different private investigators, obtaining information for both the legal profession, and overwhelmingly, the denizens of Fleet Street.

I am not particularly proud of my activities then; I was young, it was fun; forced by circumstances to live on the fringes of lawful society, it (handsomely) kept body and soul together without resorting to the need of flogging said body. It gave me a useful insight into the ‘arms length’ methods by which journalists obtained their stories.

The class system in those days was pronounced. It centred on speech patterns more than appearance. I possessed the useful combination of an accent which denoted me as a member of the upper middle class, and thus someone whose word was impeccable, and whose authority was never questioned, with a semi-larcenous and definitely scallywag mentality honed by immersion in the fledgling ‘care system’ – an admirable university education in illicit behaviour.

This unusual combination was initially put to good use in the art of extracting names and addresses belonging to phone numbers held by the old GPO. The irony of my position was never lost on me – the GPO would never have employed me as a graduate of the ‘care system’ – they only employed working class girls with an absolutely clean bill of health as regards their education, yet those same girls responded to my accent with a knee jerk reaction – if I asked them for information, they would hand it over to me immediately, merely on the strength of my accent. I was in hot demand, £25 quid a time, to provide the home addresses of people Fleet Street was interested in and only held a number for. No one ever asked me to commit a crime, they had no knowledge of how I achieved results, they would merely ask if I could help them ‘with a number’.

I would report back with the name and address – meeting in the café that used to be (still is?)  above the old Cheshire Cheese in Fleet Street, talking in hushed voices above the clack-clack of the dominoes game that seemed to be in permanent progress amongst the (apparently universally) blind print setters who would gather there in the early hours of the morning. Tea, slabs of Bread Pudding, and a pocket full of envelopes containing ‘a pony’ a time – I wasn’t complaining.

As I grew better known, the requests grew more specific – could I possibly obtain employment ‘here’ or ‘there’ and obtain such and such information? I could. I was rarely turned down for a temporary job, and did everything from modelling nurse’s uniforms to working in the print room of a major accountancy firm – from where I emerged with the ‘13th’ copy of a ‘secure’ set of provisional accounts destined for the 12 Directors of a famous investment firm rumoured to be about to catastrophically collapse.

I watched with interest as this information made its way into the public domain, invariably as a result of ‘information provided to this paper’. I worked so frequently with one famous Sunday paper that I had unfettered access to their voluminous cuttings library – a source I am ashamed to say I frequently traded on to provide ‘information’ to other papers, information they could have acquired themselves if only they had had the wit to keep their own cuttings library up to scratch, but these were more innocent times.

Many of those journalists I used to meet in the Cheshire Cheese are now in senior positions in Canary Wharf. Some have long since retired, it was 40 years ago. All would have been aware of their reliance on people who managed to find their way round their target’s understandable desire for privacy – but is that the same as saying that they had knowledge of how it was done?

I believe Andy Coulson’s statement that ‘he has no knowledge of phone hacking’ in the sense that he would never have discovered how the information was acquired, why would anyone tell him? If someone and it appears Glen Mulcaire had, discovered that Vodophone were sending out phones with a default password of ’1234′ or ’0000′, they would scarcely have revealed just how easy it was to find information that could be sold on to a journalist. It’s not just journalists who protect their sources!

Andy Coulson is being made a scapegoat for quite another struggle than the quoted ‘phone hacking’. He is caught between the battle for a ‘privacy law’ designed to protect the elite from prurient intrusion into their affairs, a battle that the Law Lords have so far half-heartedly supported, and parliament ignored, and the fear that Murdoch will cut a swathe through what remains of the media’s advertising revenue if the BSkyB merger is allowed to go through.

In turn, the ‘phone hacking’ saga has provided a useful vehicle for B list celebrities to sell yet another story to a media in terminal awe of Carter-Ruck. Who’s next on the band wagon? ‘ET’ demands to know whether his calls home were ‘spied upon’ by the News of the World?

It is such a busy band wagon, and so hypocritical, there was not a single newspaper on Fleet Street – and note, the Guardian was still safely in Manchester at that time, that has not published material based on sources that were no more reputable than the supposed ‘Vodophone hack’.

Do I hear any of them sticking up for Andy Coulson? The silence is deafening.

Politicians should be careful about lifting lids off cans of worms with a
view to gaining political advantage. The said cans might contain worms…..

Let’s not forget Benji the Binman – to quote the Gruaniad from
2000
“Readers of virtually every national newspaper will at some point have
read a scoop inspired or informed by his rumagings.
From the Sun and the
Mirror via the Express, Daily Mail, Mail on Sunday, the Times, Independent,
Guardian (though this paper has never bought documents from Pell), Sunday
Times and Sunday Telegraph – to name but a few – his handiwork has appeared in
print. ”
They printed the stories – but didn’t sully their hands by
actually paying for them.