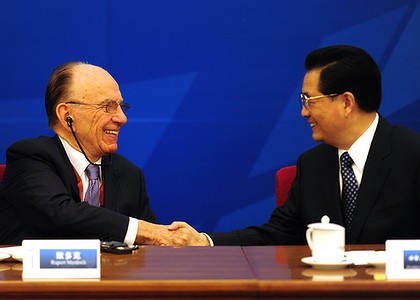 Who wants to spend a year in gaol ?

Who wants their bid for Sky to fail ?

Who wants the bother of a big public fuss ?

A big public fuss is no good for us !

When Chinese markets are in play ?

Who wants shame and opprobrium too ?

Who wants the wretched BBC ?

Who wants his stuff online for free ?

Who wants to burden Fox with neutrality ?

What, neutrality ? that’s no use to me !

Who wants to bother with the facts ?

Who wants to pay out any tax ?

Who cares for human rights, or for Liu ?

You poem is great, but the underlying idea is that Rupert should be acting
for your benefit, not his or the Chinese, and that he would only be a good
person if his networks were entirely neutral – i.e. if he had no opinion to
express other than that of other people.

There is a name for this, it is Ellsworth Monkton Toohey.

glad you liked the poem anyway

Sung of course to the tune of ‘Who wants To Be A Millionaire?’ made popular
by Frank Sinatra and Celeste Holms..

Nick, I think you should do a book of your poems and parodies. Just
brilliant.