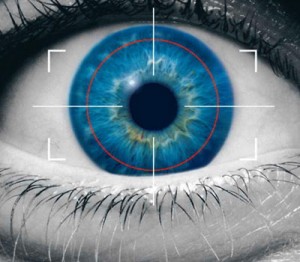 News from Manchester Airport that from this month they will be testing a new “Eye Scanner”, which will read our irises and help to “combat the war against terror”. This comes only months after the airport introduced the first full body scanners, which would…er… “combat the war against terror”. You may remember these things combat terror by taking very tasteful pictures of your naked body. Though the official line is that nobody is recognisable, and anyway the images can only be viewed by an official in another room who cannot see the actual person. Oh yes, and the images taken are immediately destroyed, and cannot be saved or printed out. And if that’s good enough for the government, it’s good enough for us, right?

So how is it going in the States? After all, they get all these security gizmos before we do.

Across the pond, where paranoia is king, the citizens are leaping up and down like fleas on a hotplate, and gibbering madly. The objects of their frenzy are the full body scanners run by the Transportation Security Administration (TSA), part of the Department of Homeland Security (DHS). The head of this body is one Janet Napolitano, otherwise known as Big Sister.

These inventions of the devil take holiday snaps as you pass through them, without bothering to record your clothing or underwear. The almost-x-ray pictures will show up your wooden leg, though. And your prosthetic breast… and the size of your penis…and your Prince Albert… If any of these show up on camera, you may be “invited” to strip, so they can see for themselves. Those breast-pads may be packed with Semtex. That artificial hip could be an explosive device.

If you are a female who is menstruating, you will be posing with your sanitary towel or tampon plainly showing up on film. Won’t that be nice? You may even be asked to submit it for inspection. Can’t be too careful…

All this is done with a fine lack of discrimination. That is to say, for every man, woman and child.

The images themselves are not kept. Heavens no! Why, that would be intrusive. No, after having checked that the traveller is not packing more armaments than the Terminator, the images are destroyed. Not saved to hard disc. Gone in a puff of electrons.

Except when they’re not. This month, the US Marshall’s Service was forced to admit that the Orlando branch had accidentally saved and stored over 35,000 images. Though they were unable to explain why. (To be fair, this occurred at a court-house and not an airport.) This came after months of the TSA claiming that the images couldn’t be saved.

Do American travellers have a choice? Of course! America is the land of the free. If they object to the body-scan, they have two alternatives, the first being TSA’s “pat-down”. This is a government-approved groping by a security person with grubby though rubber-gloved fingers. And not a gentle groping either, by all accounts. After all, you may have inserted a live grenade where the sun doesn’t shine. Have to be vigilant, you know.

Every man, woman and child.

But there is always the third option. Ms Napolitano, who views internal US flights as being a priviledge granted by the government to ordinary mortals, has been quoted as saying that if travellers had a problem with the way things were, they could always “not fly”.

All very sad… because it proves the terrorists have won. For though their young men may very well want to kill a few of us, the real aim of terrorists is to get their way by instilling terror. And today, America is full of terror.

Late Update: New American Speaker John “Orange” Boehner flew on a
commercial flight back to Ohio, his home district. Security guided him past
the metal detectors and scanners, straight to the aircraft.

No waiting in line for political masters!

Hey Smoking Hot, I suppose meeting your sister is out of the question?

I did the UK border agency iris scan thing – free, and cuts down the wait
time dramatically.

But on the security thing- come on people – we lost this war years ago.
Standing in line, remove your shoes and valuables – get frisked

“No talking” No jokes otherwise we will arrest you…….

come along – onto the trucks – quickly………

When I was at Gatwick (or it might have been Stansted) a couple of years
ago there was a booth where travellers were invited to attend to ‘register’
their iris scans. It was sold along the lines of avoiding having to queue up
at the security desks as it would be quicker to identify you. There didn’t
appear to be many takers and, of course, it wasn’t free! So when it becomes
compulsory there’ll be another huge money grab!

I saw a similar thing at Thiefrow some years ago, it was sold as quick
way to enter the Country.
On return to the Country several days later
whilst I queued in immigration I has the pleasure of watching passenger
after passenger get stuck in the iris checking cubicle as if couldn’t read
them and then ‘locked’ them in the cubicle.

Funnilly enough, three years back I flew from Bristol to Rhodes, and
Bristol customs confiscated — my nail clippers!! They, too, were convinced
that the clippers could be used as a weapon. I thought it was stupid then,
and after all these years, it’s STILL stupid.

Though I have to confess, I wasn’t carrying my AK-47 that day.

So they didn’t discover your slab of C4 cunningly disguised as a block
of treacle toffee then?

Orlando? This opens up a whole new market for holiday video’s. Now I’ll
show you all the people who travelled on our plane………..

Meanwhile every Tom, Dick & Muhammed can pack their car with
explosives, drive it onto a EuroTunnel train (no checks), and detonate it 1/2
way along the Chunnel.

We travel through the tunnel quite often Joe and most times there are
various random checks carried out.
In our camper van they frequently want
to look inside, often into cupboards and storage areas and they often want
to explore under the bonnet. I have also seen quite a few cars being pulled
aside into the cabins and ‘emptied’ at the checkpoints.
In addition the
french security usually run a chemical trace test on every vehicle in the
queue, wiping handles and steering wheels with a swab, I have no idea what
the test looks for although I have noticed the swab is placed into a machine
and the batch of vehicles is not allowed to proceed until it’s
cleared.
But in any case the train is chopped up into fireproof sealed
carriages with only a few vehicles in each so you don’t have hundreds of
victims in one place, an attack would be potentially very disruptive but
hardly such a mass risk as an airliner.
Not that any of the above
sanctions air passengers and even young children being zapped or groped in
the name of security.

Israel has, unlike the rest of the West, opted for joined-up thinking on
security. They have an impressive safety & effectiveness record, while
allowing free movement of travellers through their terminals. Luggage is
screened safely within a bomb-proof zone inside the terminal, minimising
delays. But adopting such measures would not suit the vested interests of
american “security equipment” manufacturers, who have powerful lobbyists in
Washington.
Always opt for the “pat-down”, as it messes up their schedules!
Or cut out a stencil from aluminium foil in an interesting shape and glue it
to your torso…

I know that aeroplanes are high value targets but one day some terrorist is
going to wake up and realise what commentators have been saying for some
months now: that crowd of people waiting in line for the checks is an easy
target. No need to get anything past security and a simple explosive vest will
result in as much carnage and cause more trouble than one plane falling out of
the sky.

Clarissa … can’t have you thinking like that … you’ll destroy the
security circus!

“We’ve been dealing with the same threats for decades. But we used to be a
lot calmer about it, less self-defeating ….

Middle Eastern terrorists hijack a U.S. jetliner bound for Italy. A
two-week drama ensues in which the plane’s occupants are split into groups and
held hostage in secret locations in Lebanon and Syria.

While this drama is unfolding, another group of terrorists detonates a bomb
in the luggage hold of a 747 over the North Atlantic, killing more than 300
people.

Not long afterward, terrorists kill 19 people and wound more than a hundred
others in coordinated attacks at European airport ticket counters.

Five months after that, another U.S. airliner is stormed by heavily armed
terrorists at the airport in Karachi, Pakistan, killing at least 20 people and
wounding 150 more.

Things are quiet for a while, until two years later when a 747 bound for
New York is blown up over Europe killing 270 passengers and crew.

Nine months from then, a French airliner en route to Paris is bombed over
Africa, killing 170 people from 17 countries.

That’s a pretty macabre fantasy, no? A worst-case war-game scenario for the
CIA? A script for the End Times? Except, of course, that everything above
actually happened, in a four-year span between 1985 and 1989. The culprits
were the al-Qaidas of their time: groups like the Abu Nidal Organization and
the Arab Revolutionary Cells, and even the government of Libya.”

We weren’t paranoid then, why now?

I read the Bruce Schneier article on Security — covered a lot of ground,
though I thought some of it was pretty suspect. For instance, the allegation
that some women seemed to be pulled out of line simply because they had
large breasts.

But I recommend it to anyone who wants to know more.

That particular section is `links and observations and left in most
part for you to decide. As for the women being pulled because of large
breasts all l can say is whilst myself and my sister were touring USA, she
was pulled out every time. She says this always happens whenever she
travels. lt’s the underwired bra that my sister and others like her wear.
One TSA officer said she should maybe not wear them when coming through
security, to which she replied ” What? with these?”

What it needs is a week of solidarity in the US where everyone refuses to
walk through the scanner and refuses the grope. I’m sure it wouldn’t take more
than that before the airlines are screaming and business is screaming and a
rethink takes place.

As for iris scanners, do they just take a photo or is there a laser
involved? I’m not letting anyone who isn’t a qualified optician put a laser of
any sort anywhere near my eyes, who wants to risk blindness? (There you are, a
nice rumour to spread about iris scanners, that they might cause blindness.
Who cares whether it’s true or not)

There’s currently an internet campaign calling for passengers to REFUSE
the scanner and opt for the pat-down — next Wednesday, the busiest travel
day of the year in the States, as everyone is in motion for
Thanksgiving.

Don’t know about the optician’s take on eye scanners, but I’m off there
soon, so I’ll ask.