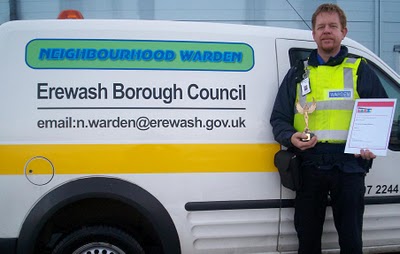 Ms Raccoon is still swishing her tail angrily in the direction of Sandwell Council, and pawing the ground impatiently at the sheer length of time it is taking to transfer Sheila Martin’s ‘file’ from the warden’s department of Sandwell Council to the Legal Services Department in the same building – who are responsible for deciding whether they wish to persecute prosecute Mrs Martin for non-payment of their on-the-spot fine. Whilst the council care so passionately about the environment that they send employees round in pairs to try to charge frail and elderly widows £75 for dropping the lighted end of their last cigarette on the pavement, in order to put the rest of their cigarette safely away in their handbag – without setting light to it – it seems they care nought about the health of a woman who has had five heart attacks and suffers from high blood pressure and angina, and must now wait interminably as the file inches its way at snails pace across the polished marble hallways of the palatial council offices, en route to a highly paid legal beagle who will decide whether they really want to fight a test case over the head of such a vulnerable defendant.

Meanwhile I have been looking at neighbouring councils. The bizarrely named Erewash in particular. Erewash used to be known as the area of such atmospheric and nostalgia laden names as Ilkeston, and Derby, but these days they prefer the utilitarian ‘Erewash’.

They have wardens, just like Sandwell,  in blue and black with high viz fluorescent jackets, pretendy police uniforms – they have even issued them with regulation police bikes so that they can pursue their victims more effectively. They patrol in pairs of course, one to persecute prosecute, and one to provide an instant ‘witness’ to the alleged wrongdoing.

Erewash haven’t always been obsessed with the environment, they once took 6 years to agree that a mountain of soiled nappies, hypodermic needles and rotting household waste dumped in Wentworth Street constituted either a health hazard or ‘litter’. They are none too quick to clean up the litter for which they are responsible, either.

Where smoking and the environment is concerned, however, they are zealous, over zealous (officially).

Erewash Borough Council has warned residents that it will continue its tough stance against smokers who fail to dispose of their cigarette litter properly.

Last week they took Barry Wakefield to the South Derbyshire Magistrates Court for failing to pay an on-the-spot fine for dropping a cigarette stub on the road. He must now pay a £235 fine for not paying the original fine.

We will never know which ‘end’ of the cigarette that Mr Wakefield discarded – was he another victim of the ‘throw the lighted end and keep the butt’ brigade? We will never know because Mr Wakefield not only ignored the on the spot fine, he ignored the threatening letters, and displayed equal disdain towards the demand that he turn up in court. We could say that the council won this one by default.

“Some smokers seem to think that cigarette ends aren’t litter – well, they’re wrong and this Council takes a zero-tolerance approach to litter louts. We don’t want to fine people, but this case should serve as a warning to anyone who is seen dropping litter of any sort that they will face an on-the-spot fine and face prosecution if necessary.

Don’t be too sure Mr Corbett! You have a short memory. It all depends which end of the cigarette you discarded. Surely you recall Daniel Slaney? Daniel was having a cigarette on his way into work when two of your council wardens pounced and accused him of having thrown away his cigarette ‘end’. Mr Slaney turned up in court and demonstrated to Magistrate Geoffrey Dennis that he always carried an empty packet of cigarettes specifically for the purpose of disposing of the butt ‘thoughtfully’. It was only the lighted end which he had ‘pinched out’ and discarded.

Magistrate Geoffrey Dennis threw out the case. He said:

“This would seem to be an example of overzealous officialdom.”

We are waiting Sandwell…….

“Tossing a paper tissue or apple core that will bio-degrade is not exactly
polite, but not great social ill worth pursuing either. ”

No, i don’t want them thrown away either. I hate that the door outside my
flat has fag ends all over the pavement.

But it’s not an issue that requires legal or goverment intervention.

Was it a proper court or a sham one? I wonder how common such behaviour as this is.

Residing in a neighbouring area, I have long been tickled by their slogans
– ‘Driving for success’ and ‘Together we can…’. The former is either
illiterate or “environmentally irresponsible” (how shocking). The latter just
begs for completion.

And anyone who has to regularly travel through Long Eaton will have some
choice words for that council. It is as if they had deliberately set out to
design a How Not to Do Traffic Management working model.

It’s heartwarming to see that a council not so far from my own home turf
(in the East Midlands) is showing the same quality of communitarian fascist
zeal as Sandwell. Once again, these are people who ‘strain at gnats and
swallow camels.’
In the 1930s there was a mass trespass at the top of
Kinder Scout; it sent the requisite message, and the Peak District area has
been accessible to walkers ever since. The only way that these dopes can get
the message is if enough members of the persecuted public (who after all pay
these bastards’ wages) stage a mass fag-end drop – and wait to see how these
petty martinets handle it. It doesn’t need outsiders from the libertarian and
anarchist communities; all it requires are enough local people who are pissed
off enough – and bloody-minded enough – to see the issue through. Now, there’s
a challenge..

Anna, I am 110% with you on the Mrs Martin case. Clearly they are
persecuting over a non-issue. But are you saying that it is OK to drop
(actual-filter side) cigarette ends in the street?

I know you don

Kingbingo – I am absolutely not saying it is OK to drop the filter end
of cigarettes in the street.
The lit ash end is a different matter –
since smokers are forced to smoke in the street, then councils must
provide suitable containers for the ash and lit end. They cannot have it
both ways – there is no way that you can take the lit end of a cigarette
home with you! (actually you can, you can carry a small tin with a lid
round with you – slap the lid on smartly, and then remove it at your
leisure once on the bus – the smell will be appalling, serves them
right!)
When are they going to start issuing

Or the middens, scrap yards and brash piles left by travellers on
trespassed land for which the owner is legally responsible. Or the
cocktail of heavy metals deposited on roads from cars’catalytic
converters – it’s actually economic to sweep up and filter that just
like gold dust is hoovered from between the floorboards in jewellers
workshops.
The problem is that councils and their blockwarts are
bullies who prey on the weakest.

Actually it’s urinating drunkards who get my goat. I live in a side
road off a main London street with a couple of pubs around the corner.
After 11 p.m. on Friday and Saturday morning, the street is re-named
Piss Street because the smell is so bad. Of course, all the wardens
have stopped work by then, and would they want to take on someone who
cannot hold there urine long enough to get to a toilet that they might
prove abusive and aggressive? I doubt it.

Once I caught a man pissing up against my wall. I tapped him on the
shoulder. He shouted “WHAT?” at me. I said: “Can I have your address
please?” He replied; “WHY?” (he didn’t have a volume control). I told
him I’d like to pay him a visit so I could piss through his letterbox.
He zipped up and walked off. Urine is far worse that cigarette stubs.
Most residents here hose down the road on Saturday and Sunday mornings
but there are always lots of very efficient and polite eastern
european street cleaners with shovels to sweep up fag ends.