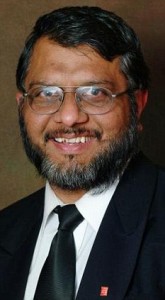 The publicity mad Mullah of Blackburn is in the news again today. A curious case.

Salim Mulla claims that he has not been able to take gainful employment since April Foolâs Day 1998 â the day the British public started financially supporting him because of âsight and hearingâ problems â and the present day.

One can only have total sympathy for someone who is unable to support their family because their sight or hearing is so deficient that no employer would consider giving them money in return for their limited ability to communicate or even read.

But wait, what is this? It seems there has been an employer who has handed over good money for Salimâs limited employability â it is us, the tax payer!

You see, Salim Mulla is also a Blackburn councillor, and we pay him Â£6,600 a year on top of his incapacity benefit to listen to peopleâs troubles and write letters on their behalf, and all sorts of other things that require an ability to see and hearâ¦.and he has been doing that with gusto since 1998.

Why in 2006, he was writing to Preston Crown Court to give a reference for his namesake Salim Mulla, who by sheer coincidence was one of his neighbours in Ripon Street, Blackburn, describing Salim as a fine upstanding member of his community that he had known for 35 years.

Perhaps his hearing is deficient, since he had obviously not heard the rumours circulating since 2000 concerning a man who lived but a few doors from him, shared his name, and had been questioned by the police on two previous occasions where he had molested young girls. It was to no avail; his neighbour was described as a pre-meditated âsexual predatorâ, and sent to jail for three years for paedophilic attacks on young girls.

Councillor Salim Mulla was on the board of the local childrenâs services at the time.

Then again, perhaps he does have trouble with his sight; for despite his ability to see well enough to use a computer, in 2009 he was revealed as one of the council âemployeesâ who had forwarded racist e-mails comparing the Nazi concentration camps with the Israeli occupation of Palestine, and included such graphic images that it had been necessary to insert the images via a portable memory stick to evade the council firewall.  Councillor Mulla had forwarded the e-mail on to no less than 63 colleagues, but apparently did not have sufficient eyesight to see that it was offensive.

Councillor Mulla was vice-chairman of the Lancashire Council of Mosques at the time.

By 2007 Councillor Mulla had managed to read a copy of Harry Potter â large size font or Braille? â and pronounced it indicative of a deterioration of the moral fabric in man, a comment which drew a satisfying amount of publicity storm of derision from outraged Potter fans. In between he was busy denouncing the Halifax and NatWest banks for issuing piggy banks offensive images designed to outrage decent Muslim children.

It would seem that despite his âdisabilitiesâ Councillor Mulla manages to make a full and varied contribution to his life as a tax payer funded âemployeeâ.

How curious therefore that the Department of Works and Pensions are not claiming that he is not entitled to incapacity benefit at all â merely that he had not informed them that he had received an increase in his council allowance, and had thus been overpaid Â£8,900 since 2001.

We are constantly told that even those unfortunate deaf dumb and blind individuals confined to a wheel chair are to be re-tested to see if they really need to be in receipt of incapacity benefit. Is it too much to hope that a man who has so amply demonstrated his ability to be a pillar of his community and a stalwart worker for his constituents should also be re-tested to see if he might do a simple task like bingo calling in between his important community duties?

Hard working employees fund incapacity benefit as much as they do councillorâs allowances. We seem to be funding the Mad Mulla of Blackburn twice over.

Councillor Mulla, 55, said he would be continuing his roles with the council and the Council of Mosques, an umbrella organisation which represents Mosques and religious teaching institutions in the country.

A spokesman for the Department for Work and Pensions declined to comment on an âongoing caseâ, except to confirm that an allegation of a failure to report an increase in income â namely his councillor allowance â was at the centre of the charges against Councillor Mulla.

The next hearing of the case is scheduled for September 22, at Hyndburn Magistratesâ Court.

Councillor Mulla, of Ripon Street, Blackburn, said: âIâve always been honest in everything I do and I will continue to be honest â thatâs me.

There are at least two members of Bradford Council who have retired on
health grounds from their public sector employment. One of the things that
relaly make smy blood bil is the blaze way in which this occers.

The âFinal solutionâ is the ONLY solution left to us.

His thievery and swindles are nothing compared to the polygamy scandal,
which is bleeding millions from the UK taxpayer.

Fair warms the cockles of this old heart (not).

I recently had my first ever application for the mobility component of Disability Living Allowance refused because I can walk more
than 50 metres without a walking stick. Iâm so glad my taxes subsidise Cllr
Mullaâs lifestyle as his need is clearly greater than mine.

A certain kind of Asian and corruption/dis-honesty.

Is it possible to bet on the outcome of the case?

Now stop being so goodâ¦ you are making the rest of us look bad!

It is nice to know where all my tax is going though. Thanks again Anna.

Of course heâs honestâ¦how could you ever doubt such a fine upstanding
pillar of the community?

This story is in our local paper, the Lancashire Evening Telegraph. For
some reason, the comments are disable. I canât think why theyâve done that

Theyâre protecting us from making racist statements. As if.

Doesnât that in itself constitute a form of discrimination?