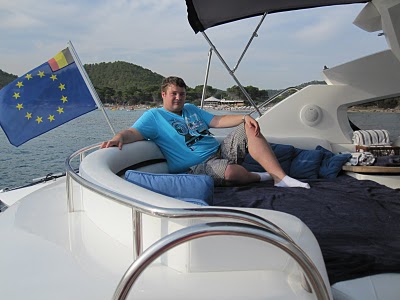 Gareth relaxes on the Sunseeker he hired to amuse a group of friends he took on holiday to Ibiza.

It was not only MPs who were casualties of the last election, when failing to get re-elected. Business men crashed to earth too, as government contracts changed focus and allegiance.

One of the most remarkable is young Gareth.

Young Gareth has fixed ideas of what constitutes a respectable businessman. It is someone who rests their weary head at the Ritz, sits on the local bench, and dines in Michelin starred restaurants. All this and more he had achieved at the tender age of 19; ladling justice to his fellow man as the youngest magistrate appointed to the bench, conducting interviews with financial journalists in the Ritz, interspersed with dinning at Gordon Ramseyâs â oh, and completing an undergraduate law degree at Nottingham University. Pretty impressive you might think â but precisely how he achieved this has monumentally unimpressed some of those whose path he has crossed.

There is a suggestion, originally made in the Contract Journal, once the biggest voice in the construction industry, now sadly a victim of economic woes, that Garethâs parents, Carl and Patricia Darbyshire, were disqualified from acting as company directorâs for 3 Â½ years, a disqualification which ended on the 14th January 2009. We can only presume that young Gareth learned at great deal from his parents.

Three months into his University course, at a time when most scholars are struggling with the intricacies of Legal Interpretation, Gareth was approached by a friend who said words to the effect of ââere thereâs a blinding company up for sale for in South Wales, you should take a look at itâ. I donât know how many 19 year old 1st year law students are having this sort of conversation, not many Iâll wager.

Anyway, Gareth is made of sterner stuff than your average student. Not for him an offhand reply along the lines of âyouâre âavinâ a larf arenât you, me grants not come inâ. Nope. Gareth thanked his informant and went off to raise the cash, as you do.

HSBC gave him some of the money, on a debenture. Between Industrial and Corporate Finance, described as a ânon-prime lenderâ and Masthaven Finance, he raised the balance of a stunning 3 Â½ million pounds.

With the 3 Â½ million virtually in his back pocket, he headed down to South Wales â he offered the old established building firm of TPT Contracts Â£7 million pounds for their company. âWhat about the balanceâ they said. âYouâll get that laterâ he said.

The new company board comprised the Paul Madeley who was an old friend of his parents and had run a DIY chain, but naturally, not his parents. If you are disqualified as a Director you are also prohibited from acting as a âShadow Directorâ. Besides, this was all our first year law students own efforts, perish the thought that anyone might have been directing him from the shadows, so to speak. Unthinkable. Any first year student with wit and brains should be able to borrow 3 Â½ million on their track record of, er, attending lectures, should they not?

Gareth was not slow to reward himself with the fruits of his endeavours; with a Â£20 million turnover he was soon to be seen alternating between a customised Range Rover and that impoverished undergraduateâs perennial favourite â the Ferrari. On one occasion he was said to have sent a chauffeur driven car 200 miles to collect a particular pair of designer trainers he was partial to and his favourite aftershave.

There were rumblings of misgivings at the Narbeth offices of TPT early on.

âThere was âsome nervousnessâ in the TPT team when they heard about it, he says, so he got them all into a room, reassured them that none of their jobs would change and then took them out to lunch so they could get to know him.â

They must rue that lunch now. In May, the Western Telegraph was reporting that the firm was in trouble and being chased for a string of bills. 15 employees were in the invidious position of having to go into work every day, knowing that they would not be paid, but also knowing that if they did not go into work and signed on instead, they would not be eligible for redundancy payments.

Less than 16 months after Gareth the entrepreneur took over the firm, creditors filed for bankruptcy, citing Â£4.5 million in unpaid bills. 45 workers have lost their jobs.

Given that TPT was a family run business, many of the financial tragedies are small and personal. One electrician is owed Â£46,000 for work he did on the various local authority contracts that TPT held. Naturally he has paid for his materials, and paid his sub-contractors â it is the roof over his house which is now at risk.

Shortly after the alleged disqualification of Garethâs parents from acting as company directors ended, the company house details were changed. Now a Patricia Margaret Darbyshire took her seat as Company Secretary, and another Gareth Carl Darbyshire joined as Director. âFamily friendâ John Maddeleyâs appointment as Director was terminated.

The Police and the Serious Fraud Office have been called in by the original owners of TPT Construction who have never received the Â£3.5 million balance they agreed to defer, nor are they likely to.

It has also been revealed that 19 year old Gareth, who along with all these other exciting events between Contract Law lectures had managed to get himself appointed as a Magistrate in Nottingham, had failed to notify his bench chairman that he was the subject of a pending bankruptcy petition.

We have an organisation which is designed to protect the public interest from this sort of situation. During the period of Garethâs reign, it was presided over by four unelected Ministers, primarily Lord Mandelson. When he took over the Department of Trade and Industry in 1989 he asked, âWhat is the DTI for? Iâve got bugger all to do, and thousands of staff to help me do it.â

The name changed to the Business, Enterprise and Regulatory Reform, but it seems there were still plenty of idle hands on the ground.

Under the Companies Act, Mandelsonâs department has the power to investigate limited companies where behaviour suggests serious misconduct, fraud or sharp practice. Apparently they have to wait until they receive a complaint, then they have to be satisfied that it is in the public interest to investigate. There is no automatic flag that waves when the 19 year old son of allegedly disqualified company directors raises Â£7 million to buy the livelihoods of the majority of inhabitants of a small South Wales village in between pints in the student bar.

The Business, Enterprise and Regulatory Service costs around Â£2 Billion pounds a year to run, and would appear to be as much use as an inflatable dartboard.

Further investigation on this subject and credit for the picture to Carl the Hack.

This article is complete rubbish. Firstly HSBC, Turpins and Phillips never
lent any money to fund the deal. The were also not on the board post
completion. Furthermore the companyâs assets included land that was
misrepresented by them as it could not be built on due to drainage issues
despite Turpins and Phillips selling it as part of the deal and knowing the
development of such land was to fund their deferred consideration. There is a
counterclaim against Turpin and Phillips for 5.1 million pounds a fact that
seems to have eluded this article. His parents had no involvement with the
negotiations and were not disqualified at the time of purchase neither were
they shadow directors. His parents ran a successful company for 33 years
before the insolvency that led to this disqualification, hardly serial
offenders. This article as many others on the subject is defamatory and full
of lies. The 4.5 million of creditors quoted includes 3.5 million the Turpins
and Phillips claim are due to them despite being the subject of a 5.1 million
counterclaim. The bankruptcy petition issued by Turpin and Phillips is stayed
pending the outcome of an appeal in the matter and it is not a matter that
needs reporting to the bench unless a bankruptcy order is made which is not
the case. I suggest before posting articles like this you check the facts to
avoid a claim being made against you for liable which I would have thought is
highly likely.
Due diligence was carried out by both sets of Solicitors
whose costs for doing so ran into hundreds of thousands of pounds. In addition
his mother and father were never directors of the company.
Get your facts
straight before you make such serious allegations .

R U a Darbyshire

Here is the russian text of the uk companies act!

Avarice by all parties.

They have actually changed their name to Business, Innovation & Skills,
sadly they have precious little skills in either department.

Mandyâs successor Vince Cable has been persuaded that they are doing such a
marvellous job, they should not be be broken up at all.

Much like MAFF (Ministry of Agriculture, Food and Fisheries) suddenly
dropped the agriculture, food and fisheries bit by becoming DEFRA
(Department for the Environment and Rural Affairs).

You know then not to expect the wheat in your daily loaf to have been
grown in the UK: how better to tell an industry itâs had its day than to
ditch its Ministry in favour of the Environment and Rural Affairs?

Oooh! Go on! Get started!

BERR should be shut down, the buildings it occupied demolished and the
ground sown with saltâ¦

Can you guess that Iâm not terribly impressed with it?

Now thatâs a fine classical form of retribution Pogo! Sounds like you
have a wealth of experience, and I am sorry if these have been
unfortunate.
G the M

Fascinating â I had heard something about this, but not the detail. A
perusal of the Abbey Library tells me three and a half years is at the upper
end of the lower bracket for Directorâs Disqualification Proceedings, but you
do have to work quite hard and persistently to get them started in the first
place. Also, I recently had experience of a case involving most serious
allegations of child abuse which which certainly should have been prosecuted
to trial, but the charges were dropped. The reason being that the Crown
Prosecution Service are (a) poor and (b) given targets for successful
prosecutions, so if they consider the case is difficult they drop the case. A
slightly different issue, perhaps

The Business, Enterprise and Regulatory Service full of pricks

I suspect that this is not the only one and that there is almost a legion
of such cases around who have had public money thrown at them. One wonders how
many of them are connected to some of the more interesting Labour
politicians.

Putting on my sub-editors hatâ¦

ââ¦primarily Lord Mandelson. When he took over the Department of Trade and
Industry in 1989â¦â

Ooh er, Clarissa, well spotted, I took the date from George Monbiot â and
nobody seems to have noticed over there â http://www.monbiot.com/archives/2009/05/04/mandelsons-fifth-column/

The Insolvency Service wonât begin to act unless they are provided with
written evidence that a disqualified director is breaking the terms of their
disqualification order. In short, complainants have to do their job for
them.

I was referring to another case entirely, Mr Wibble.

Ok, you can understand the confusion it appeared to be on this
article.