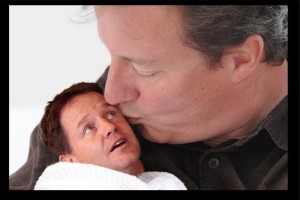 In years to come when you want its support, itâll announce that it has to go off and âfind itselfâ,

Youâll spend years clearing up the mess it makes,

It will never show gratitude.

An excellent photoshop by Alex.

Unless you are wholeheartedly committed to the cause of the local Cats
Home, it will also be the recipient of your estate in the event of your
demise..

One wonders who the father is.

And when it grows up, it may even consider patricide.

Good photo!
Heâs got to spoon feed it and clean up the doo doo as well,
of course.
Much as I love the name, she really should have been Baby
Nicola

Ah yes, baby Nicola, as seen here earlier in the week I believe