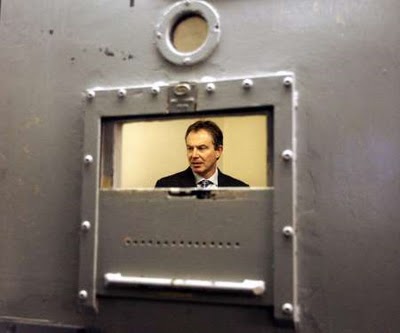 Far and few, far and few,
Are the scruples of Tony Blair;
His lies are bold and heâs shameless too,
And they went to war in a Sieve.

They went to war in a Sieve, they did
And totally unprepared
With not enough armour for soldiers to don
With too few choppers â the list it goes on
But Blair, he never cared.
And every one said, who saw them go,
âO wonât they be soon undone, you know!
For the list of shortcomings is terribly long,
And happen what may, itâs extremely wrong
To send our boys unprepared!â

The casualty figures soon started to rise,
The coffins they soon came in;
So to cover their arses they lied and lied
(No sign of remorse for the many who died)
And they gave the order to spin!
And they hunkered down at Number 10
And they lied and they spun and they lied again
âThough the charges against us be ever so long
Yet weâll never admit we were rash or wrong.
While we have breath, we spin!â

Tony Bliar is the worst Prime Minister this country has ever had ( apart
from Gorgon the Moron). Bliar is a hippy, a traitor, a neophile and a NEW MAN
NONCE who has now decided to pay some of the money he earned with the blood of
some of the finest young men that this country has ever produced in a vain
attempt to salve his conscience. I have seen on facebook that there is a group
calling for people not to buy his bloody book and just give the money to Help
for Heroes or the British Legion. I wouldnât want a single peeny that I have
earned going to that trecherous piece of s**t!!!!!

Blix has blood on his hands as well.

Brilliant â quite brilliant. Thank you.

Great stuff, Nick. Have you sent a copy to Chilcott?

Good poem. Donât know what to say about the content, and it has probably
all been said anyway.

BUT our tony is donating the profits from his book to build a centre for
wounded soldiers. Isnât that kind? And he is ONLY getting a