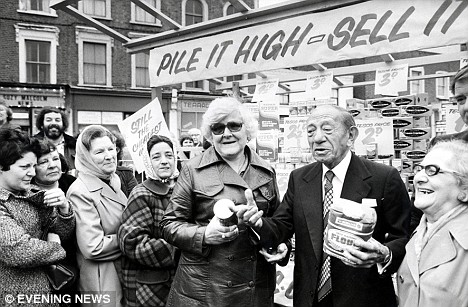 “Roll-up, roll-up, get yer lovely ASBOs here – George, give that lady an ASBO and an extra one for her husband, hurry up there lad! – and a conditional discharge for the lady in blue.”

“Right m’duck, one community service coming up and an easy-over fine on top.”

“Only cash here, no credit, pay yer fine to the lady at the till.”

“Let that little lad through, ah, youth offender, put a bag over his head George, can’t have him identified – is there an appropriate adult in the house? – Thank-you madam, step forward, just take him into the ladies changing room, next to the outsize jeans, you can interview him in there.”

“What’s that? You’re looking for the Custody Officer? In the gents changing room Madam, in the Greeting Cards and Sundries aisle.”

“Case adjourned lady? Come back next week, can’t promise to have any cheap Tatties then though, sure you’d rather not plead guilty?”

Yes! The caring, sharing, oh-so-accessible, we’ve got nineteen year olds, black, pink and yellow, all diversities catered for, wheelchair friendly, Magistrates Association has come up with their latest nothing-to-be-frightened of, transparent justice, no need to be inconvenienced, pay us at 30p a week, scheme.

They want to hold court in Tesco’s…..

“Why not use a unit in a shopping centre with a glass front where everyone can see what is going on? Summary justice should be about dealing people where they actually are,” he said.

“We could have a court in the Westfield shopping centre, for instance, so that instead of a shoplifter being taken to the police station and it taking hours to build a file even if they are going to plead guilty, they could be dealt with far more quickly.”

Defendants and Witnesses browsing the shelves companionably side by side, at Lidl – who’s going to sort out the punch-up?  The hatchet faced store security officer who just nicked the culprit?

Justice! – Pile it high, sell it cheap. I don’t know whether to laugh or cry!

“Then we would just be warlords effectively…

Your quite right I do apologize.

I realise now my anarchist concerns are institutionally sexist.

I reckon they might try to get PCSOs involved here, in some kind of Judge
Dredd role. The way their powers have been expanded, it seems a logical
conclusion. Citizen’s arrest, up in front of Westfield court, given powers to
fine/community service/up to 6 months jail time, no need for real police
involvement, job done.

Also, think of the sentencing cross-selling opportunities. Community
service? 100 hours in Burger King. Bit of jail time for a white collar
criminal? Lock him up in “The Village”. ATMs all over the place to sort the
fines out.

The Old Testament restrictions on what can and cannot be done on the
Sabbath, or any other ‘special’ day for that matter, have been scrapped by
New Testament teaching. As have dietary restrictions, with the exception
of food which contains blood or which has been sacrificed to an idol (no
black pudding or halal for me, but I wouldn’t eat that muck anyway) Roman
14 vv 5, 6. With this in mind, you do me a disservice by painting me the
Witch-Finder General.

You want to shoot people in the face for littering, and I’m not of
sound judgement?

Am I reading the Daily Mash or something, you can’t be serious!

Kingbingo – you know me better than that – of course I am serious –
follow the link!

The problem with our justice system is not actually the police. Sure
they are stuffed to the gills with political appointees and you can

Well, look at what happens when they “do it properly” :

Man arrested in 1996, accused of rape. Not picked out of a lineup by the
victim or her friends. No forensic evidence given. 13 years with a minimum 7
year term. He constantly protests his innocence, and as such, does not
“progress” in prison, so doesn’t get out after 7 years. His appeal failed, and
he can’t then re-appeal without apparently going to the Criminal Cases Review
Board. Now it appears there was forensic evidence, which doesn’t link him to
the crime, and wasn’t disclosed.

I got a speeding ticket, and was informed that pleading guilty early by
post would probably result in a lower fine, or alternately I could go to court
and risk a bigger fine, followed by the text “NOTHING IN THIS LETTER IS
INTENDED TO MAKE YOU PLEAD GUILTY”.

This chap apparently gets sent down for something he denied doing, on
bugger all evidence. He doesn’t play along (read: show regret/remorse and
attempt to reform, mainly as he sticks to his denial) and therefore isn’t
given possibility of parole, as he’s still probably considered dangerous. The
message is the same – consider coughing to something and it won’t be as
bad.

Then of course there is the CRB system, which makes a mockery of the
Rehabilitation of Offenders Act, which should allow someone to have a clean
slate, but if a company requires any form of CRB check, then the previous
arrest/charge/jail term will show up – even if someone is subsequently cleared
(if they’re lucky, a ‘note’ maybe put on the system).

You can’t do right for doing wrong, or in fact, do wrong for doing right,
it seems? And of course, don’t forget the court of public opinion, who mostly
read The Sun…

Maybe Tescos will sell ‘Do it yourself defence kit …. all you need to know
in 5 mins’. Oops, silly me, ‘not guilty’ pleas are not allowed.