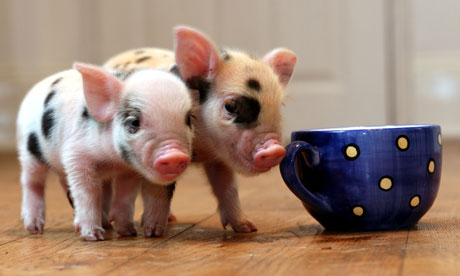 Remember the too, too chic ‘tea-cup piglets’? The must have accessory for the terminally fashionable? The £700, stuff it in your Gucci bag, take it to a film premiere, let it sleep on your bed side table, perfect pet? The one that even seduced Victoria Beckham, her of the fastidious taste?

It seems that the advert which accompanied the above picture was slightly misleading, and today the Advertising Standards Authority has banned the ‘Little Pig Farm’ from running that ad any longer because it inferred that the little cutie pies would never get too big for your Gucci bag any bigger than 12-16 inches high – and that just isn’t true.

She must be thrilled!

ok – I confess to a fondness for pigs. And also I have NO idea how to embed
URLs into these posts.

ooh – cool – the URL thing happens all by itself !!! You learn a new
thing every day!

Eurk! I don’t see the fascination with pigs as ‘cute’ animals at all. They
are dirty, smelly things. There’s only one good thing about pigs, and that’s a
bacon roll with a cup of strong black coffee.

I’d love to see Mrs Beckham taking one of those on a lead to a film
premiere, though. That would be worth the licence fee all by itself.

All farm animals are dirty smelly things compared to domestic cats and
dogs. In fact pigs are quite clean. One of the reasons they have mud on them
is to stop them getting sunburn. The other being the fields they’re kept in.
Pigs are also highly intelligent. But the best place for them is in a bun
with an egg and some brown sauce.

Those silly little things would slip between the bars of my
bar-b-que.