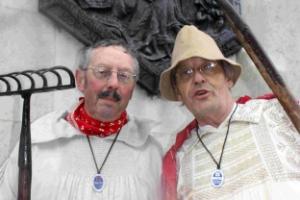 The sorry pass that the teaching of our recent history  has now reached is that the blue badge guides on âstrikeâ are now being compared to the Tolpuddle martyrs by the UNITE union. This is the same union that used its political fund to back the neo Stalinist activities of the last Brown Government, with Damien McBride  as a low rent Beiria.

The trouble is that the modern Trades Union movement and Socialists have hijacked the Tolpuddle Martys in the same way that they have appropriated the Diggers and Levellers.

The Trades  Union Movement has very little right to appropriate the Martyrs, because they were not deported for being members of a Trades Union, they were deported in 1834 for swearing an illegal oath in the formation of a Friendly Society. The Friendly Society of Agricultural Labourers.

The repeal of the Act in 1824 was a major mile stone, and had to be seen against the fevered Radical atmosphere from 1776 â 1848  that was LIBERAL in nature not Socialist. Das Kapital was not published until 1867 !

The American Revolution, The French Revolution, The rise of Napoleon all threatened the ancien regimes of Europe and lead to some desperate repression and surveillance of the British people not seen again until 1997-2010.

After the economic collapse following Waterloo, radical liberalism and republicanism stalked the post feudal settlement of 1688. The Peterloo Massacre in 1819 and the  introduction of the six Acts of 1819.

These were the low point of State repression fearing the equivalent of internal and external revolution (insert terrorism for revolution, and you can see the drive of my thinking as to parallels to today)

There was even the Cato Street conspiracy to remove the government by revolutionary force. By the time of the Tolpuddle Martyrdom, voluntary friendly societies were being encouraged by both Tories and Whigs for the betterment of the poor. Building Societies were starting, as were Burial Clubs, Trustee Savings Banks.A ll of these were voluntary organisations not run by the State as Bureaucratic Socialists would have you believe is absolutely necessary, but diluted power away from central Government.

The Great Reform Bill passed in 1832, it was the high point of true classical Liberalism, the scourge of Marxism as a popular political movement was still fifty years away.

It was the Bourgeois Webbs who  first advocated that the Tolpuddle Martyrs were early socialist revolutionaries, as with much of their Fabian thought it was history being re written. Webb also bent reality in her publication- The Truth About Soviet Russia (1942) have been widely denounced for adopting an uncritical view of Stalinâs conduct during periods that witnessed a brutal process of agricultural collectivization as well as extensive purges and the creation of the gulag system.

She was also a fan of eugenics. George Bernard Shaw, another Fabian was more concerned with the extermination of the idle, the unfit and opponents of Socialism, he defended the rights of the Nazis to exterminate the Jews â but preserving the clever ones. Writing to Beatrice Webb in 1938, he said;

We ought to tackle the Jewish question by admitting the right of States to make eugenic experiments by weeding out any strains they think undesirable, but insisting they do it as humanely as they can afford to.

These vile people are heroes of the âprogressiveâ Left  who advocated historical lies and propaganda, together with physical extermination of opponents of socialism and the âunfitâ. Blair, Brown and the Millibands are their intellectual successors.

God is our guide! from field, from wave, From plough, from anvil, and from loom; We come, our countryâs rights to save, And speak a tyrant factionâs doom: We raise the watch-word liberty; We will, we will, we will be free!

George Loveless â Methodist Lay preacher & Leader of the Tolpuddle Martyrs on being sentenced to transportation.

I see nothing there about establishing the dictatorship of the proletariat, exterminating Jews, taxing the population into poverty, and extolling a High Tax State Bureaucracy.

Loveless was in a direct line from Freeborn John Lilburne, NOT playing John the Baptist to Karl Marxâ  coming of the Messiah. It was about LIBERTY.

Of the martyrs  only James Hammett stayed in England after their release in response to a 800,000 signature petition, he died in the workhouse. The others left England and settled in Canada to start a new life as free men.

The Blue Badge Union should hang their heads in shame in allowing themselves to be compared to George Loveless and friends. If that is what they truly believe they have  very little to say of any account to tourists that is historically true.

Next,  UNITE will be arguing that they are a âfrontline serviceâ.

This survey of the history of the labour movement is an interesting aside,
but doesnât address the real problem, which has been lost in all the media
muddle about trade unions, martyrs, etc â how is someone to live on wages that
amount to

Thank you, thank you, thank you for a proper telling of the development of
grassroots labour movements. No mention of the Chartists, but neâer mind. The
desire to rewrite history to âproveâ a continuity between Lilburne, Winstanley
and the Martyrs, and the Labour Party, new or old, is grossly offensive to the
memories and achievements of those who sacrificed everything to bring greater
freedom and autonomy to the mass of people in this country. And historical
illiteracy is such that people will be inclined to believe the lies and
distortions. What fate would have awaited the Tolpuddle Martyrs under Blair or
Brown? Control orders? Extraordinary rendition? Fixed penalty notices? Banning
orders?

Spot on and a very handy little history lesson for the Marxists and Liebore
supporters everywhere!