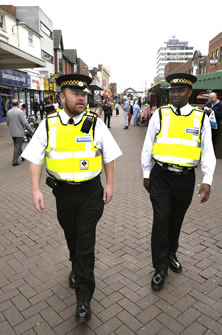 Fearlessly seeking cigarette ash on the streets of Sandwell.

We start the week with a little humdinger from the Peopleâs Republic of Sandwell.

In 2008, Sandwell was one of only three district Councils to be awarded the lowest âpoorâ rating by the Department for Environment, Food and Rural Affairs in respect of the rubbish in their streets.

It is not as though they do not have employees whose job it is to collect rubbish â 130 of them to be precise. Whoops! About to go on strike.

Sandwell Council is engaged in a bitter battle with their binmen. Some 87% of the towns 130 Unite members have voted for strike action.

Not to fear, they have a back-up plan.

Sandwell Council was one of the âdeprived areasâ who were awarded money from the âWorking Neighbourhoods Fundâ to get people off welfare and into work, so they have money available to employ street cleaners.

Hold fast, there is a Quango as well â Tipton Litter Watch, funded as part of Sandwellâs Children and Young Peopleâs Trust Partnership â and they are involved in litter collecting too. In fact they run an âaward winningâ scheme to âmake Sandwell sparkleâ â in the last three years, 8.500 school pupils, 1,000 teaching staff and 93 Sandwell schools have taken partâ¦â¦

With some success too:

LITTER-picking volunteers were amazed to find three motorbikes â including a Harley Davidson â and more than a dozen bicycles as they cleared out a Black Country canal last weekend.

A massive 45 tonnes of junk was pulled from the Sandwell waterway â heavier than all of the rubbish Sandwell Councilâs Big Spring Clean campaign has collected in its three-year history.

Local authority staff were joined by volunteers from British Waterways, the Inland Waterways Association, the Waterways Recovery Group and the Birmingham Canal Navigation Society to make a team of 140 workers.

– and we still havenât counted in the workers hired from the âWorking Neighbourhood Fundâ!

Sandwell has also been given a share of a Â£500,000 âRespect Task Forceâ Fund, split between 20 councils to fund a creepy scheme whereby local schoolchildren were used to record messages to be broadcast over a loudspeaker whenever watching CCTV control centre staff saw anyone throw a piece of litter on the ground.

They havenât finished yet! Sandwell has also hired âSandwell Wardensâ to patrol the streets, taking an âuncompromising, but fair and consistent, stand against anti-social behaviourâ:

Wardens have been delegated a range of powers by Sandwell MBC which allows them to issue Fixed Penalty Tickets for a variety of offences which include litter, dog fouling, abandoning a vehicle, graffiti, fly posting, repairing a vehicle on a road, offering a vehicle for sale on the road and other offences connected to litter enforcement.

Now you might get the impression by now that the entire population of Sandwell is engaged in picking up litter, and they might be fighting over the last remaining chewing gum wrapperâ¦..

Which would explain their latest antic. Following earlier excesses, whereby they fined a Mother and Baby for feeding the ducks, and another lady when she blew her nose in the inclement head winds they experience in those parts, and the tissue was blown out of her hand, the stalking jobsworths have really excelled themselves today:

AN elderly widow has been threatened with a Â£2,500 fine by council officials â for dropping cigarette ash on the pavement.

Sheila Martin, 70, was smoking at a bus stop when a warden pounced and handed her the Â£75 fixed penalty for littering.

The cash-strapped gran refused to pay â and has now been warned it could rise to Â£2,500.

Yes â sterile ash from the end of her cigarette, that she was duly smoking in a howling head wind at the bus stop anyway! Not a cigarette end, the ash.

If this lady is presented with a Â£2,500 bill, I shall be starting another fund, ala Nick Hogan.

Iâm in, if itâs needed â for legal support and \ or any eventual fine â¦

The Nick Hogan case was excellent indeed (I contributed) â¦

Put your money where your mouth is ! â¦

UPDATE: I have now spoken to a member of Sheila Martinâs group of
friends, and await further developements. Phew!

Iâd like to see Mrs M hold out (safe in the knowledge that her fine will be
paid). Imagine the howls of outrage when they threaten a pensioner with prison
for dropping ash and the forced climbdown when they realise it wouldnât stand
up in court.

Iâm in for the fund, in fact, after the Nick Hogan case I would have been
willing to contribute on an ongoing basis to a general fighting fund. Iâd
want, however, commitment from those whose fines are being paid to hold out so
that there is maximum exposure of the harassment of smokers.

Either there are none or they are not loading

The bottom of that canal sounds remarkably like my hallway at the
moment.

With two near teenage boys it gets like that sometimes.

I guess weddings in Scumwell are not allowed confetti? But itâd be quite
funny to accidentally drop a bagful in the street near one of the
knobsworthsâ¦

No doubt we will be able to look in the public sector recruitment
supplement of The Guardian and see a spate of adverts for persistent public
space abusers councelling teams, outreach workers for littering addicts and
clean streets communiy organisers.

All carrying nice salaries of course and successful spplicants (preference
will be given to members of ethnic and sexual minorities and socially
marginalised categories) who having been appointed can spent the rest of their
working lives trying to find out what they are paid to do.

If they are arguing that inert ash is litter, then anything dropped or left
behind is litter. As each and every one of us leave a small amount of whatever
material the souls of our shoes are manufactured from on the pavement each and
every step, that is litter. As our skin sheds all the time, that is
litter.

You should start a fund to identify the official concerned, and get
volunteers to follow him or her around, constantly reporting them for
littering. When the plod arrive to try and hassle you into desisting, report
them for littering as well. And the lawyers who turn up at court, and the
judge, etc etc etc.

However, I believe it has already been established in court that fag ash
isnât litter, so perhaps this will just be quietly âdroppedâ

What alarms me most, however is this:

What the fuck is that all about? a) what on earth has it got to do with
litter, and b) since when was it a crime to fix your old jalopy in front of
your house ~ you know, the one that takes you to work every day, unlike your
labour voting, scrounging dole scum bag neighbour?

Jesus, I have been driving self maintained old knackers for the last four
years in order to work. Are they saying this is a bad thing

They will say it is intended to combant traders and mechanics
fixing and/or selling cars on the road operating as a business but no doubt
one day it will be applied to someone fixing their own car.

Count me in on any fund.

Anna, I agree with your derisory remarks re this council and their bl**dy
jobsworths, but your statements on what happened with Mrs Martin differ from
what I have been hearing on the radio. The ânewsâ reports say it was a
cigarette butt that she dropped, and a discussion programme referred to a

Gonkione,
The Telegraph, the Daily Mail and the Sunday Mercury â which
is a local paper â all insist it was cigarette ash. I havenât heard a radio
report, so canât comment. I now have a telephone number for Mrs Martin, but
unfortunately, she is not at home. I am doing my best to contact
her.
Hereâs the link for the original story â and being a Sunday paper,
they are not there today either!

Gonkione â by the way, the fixed penalty is definitely

Anna â If that is the case I stand corrected. Please understand I am
not trying to do an EV as on another of your blog pages. From what I
heard, not read, I can only assume that maybe the national radio station
in question was distorting the facts to suit someoneâs agenda. Has this
sort of thing happened before?(Irony) Thanks for the response.

How sad this is ,the jobsworths always go for the easy target.
I wonder
what the result would have been if the jobsworths had seen a gang of hoodies
with staffie in tow bung a roach on the pavement.
Nothing zilch zero.
So
this is merely a case of taking advantage of an old lady.
Just shows the
cowardly nature of those pond lifes.
We all know this to be true.

lâd rather put to a fund fighting the ridiculous fine. l note she is
fighting it. ltâs a pity we canât get in touch with her to give support.

JuliaM â¦. Yes, l too have noticed the victims of these jobsworth only seem
to be the vulnerable. Canât do the hairnet and curlers â¦. shaved head! but the
rest is ok.

On ânother blog, Iâve (only half-jokingly) moored rhe possibility of âdecoy
granniesâ. Sturdy men disguised in hairnets and curlers who can lure in the
officious council-shirker with the promise of easy prey, to then throw off the
disguise and beat the stuffing out of them.

Pretty soon, this problem will be resolvedâ¦

I believe last year there was a story from one of the London boroughs
were the jobsworths were instructed not to approach persons who looked like
they might fight back ,I believe one of them âwasâ attacked.
I wonder why
?

Dunno about a fund, a lynch mob would be more appropriate.

That name rings a bellâ¦

Oh, yes! Of course! Home to Barmy Bobby Piper, the Baron of Blackfaceâ¦