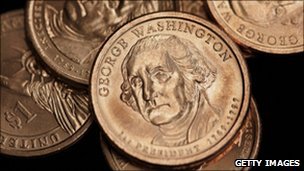 He would be so proud

There is little I can say that can convince you of the blind stupidity and wasteful cost of government as well as this little tale can:

In hidden vaults across the country, the US government is building a stockpile of $1 coins. The hoard has topped $1.1bn – imagine a stack of coins reaching almost seven times higher than the International Space Station – and the piles have grown so large the US Federal Reserve is running out of storage space.

The coins began to pile up in 2007 when a law went into effect creating a new series of $1 coins commemorating dead US presidents.

How did this happen?

Congress passed the law creating the coins despite evidence that Americans never liked the $1 coin in the past.

You could knock me over with a feather! Politicians creating something that nobody wants, in the face of strong evidence to the contrary?

In a 2002 report, for instance, the investigative arm of Congress described “public resistance to begin using the dollar coin” despite a three-year, $67m (£42m) effort to promote the previous series.

Since the presidential coin programme began, the US government has spent an additional $30m to promote them but they still have not taken hold.

Let me get this straight: they have spent $100,000,000 trying to get people to use these coins, and they still aren’t interested? A hundred million dollars?

Yet the piles have continued to grow because the law requires the US Mint to issue four new presidential coins each year even if most of the previous year’s coins remain in government vaults.

Of course, you know it’s going to get better, don’t you?

In addition to the millions spent to promote the coins, shipping, storing and guarding the excess inventory costs money, though how much is unclear.

A perfect example of why the government can’t even be trusted with the elementary task of coining money, let alone anything more complex like directing monetary policy. They have created a product that no-one wants, and instead of stopping production and firing the person who came up with the product so that he can’t do any more harm, the government will continue to make this coin that nobody wants, even though Obama should have no problem stopping what must be one of his unpopular predecessor’s “pork barrel” projects.

This complete folly is costing the US millions in continued minting costs, storage costs and protection costs and yet the monster of government continues on and on, pouring money down a limitless pit.

But why should the government care, really?

It’s not their money they’re wasting.

The $ coin was an attempt to impose an unwanted symbol of currency on the
US population. The $ bill is known for being regularly redesigned/re
manufactured to frustrate counterfeiting. Despite that, US paper currency is
widely counterfeited – apparently 82% of $100 bills in circulation in the late
80s were counterfeit.

The $ coins have been manufactured since 2007, and the security features on
them are probably less advanced than the paper currency.

The (2) Euro coin is widely counterfeited, despite being more complex than
the

At least when the world realises that the internal US dollar has little
intrinsic value and stops using it as a reserve currency all these coins can
be sold on the metal markets to bail the US out!

I much prefer pound coins to dollar bills. The bills stick together and are
generally a pain in the arse.

But of course we all know there’s no need for a monopoly on currency issue
anyway, so it’s a moot point!

Yep, they should withdraw the dollar bill like Britain withdrew the

What are people going to do? Refuse them?

And coins don’t wear out as quickly as paper.

They are valid currency – if a little unexpected. As a Brit I didn’t
realise they existed until I was in California earlier this year and the
ticket machine for the light rail spat them out as change for the twenty I’d
just inserted. A local walking past commented that I’d just hit the jackpot as
16 of the things landed in the coin tray one after the other.

Didn’t notice anyone do a double take when I spent them though.

Surely they don’t need guarding if they are not being used as currency, do
they?

Think of all that energy used, contributing towards Global Warming,
smelting the metal for those coins.

Unfortunately, Anna, a pile of over a billion $US coins and the associated
costs in minting, stroing and guarding them is the last of Obama’seconomic
woes.

And when the US catches Ebola, the rest of the world had better duck.