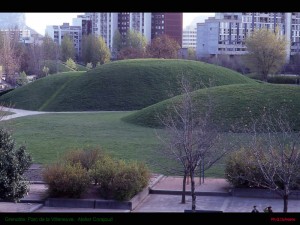 Andrew Withers post on Sunday asking where it might be possible to construct a new existence struck a particular chord with me for here in France we are witnessing the destruction of a socialist utopia that was built in the 60s.

Villeneuve in Grenoble arose directly out of the student revolution in 1968. Left wing revolutionaries, architects, town planners, sociologists and psychologists came together to construct a brave new world.

A spectacular site at the juncture of two rivers and three mountains was selected to build a city to house 160,000 people. A careful mix of apartments, social housing, parks, schools, private housing, shops, health services and social care when necessary, was incorporated.

The town hall employed workers to provide plumbing, decorating, and light building services for all, not just those in social housing.  Here the rich and poor could live side by side, with everybody provided for according to their means.

It didn’t last. Those who could afford to get out again, when faced with the reality of their children sharing schools with the marginalised, did so. The demographic balance tipped, and schools started to close.

The wide open spaces that the planners were so proud of changed in nature. During the day deserted; at night, increasingly overtaken by bands of unemployed youths whose parents came here from the Maghreb. A drug trade arrived to offer oblivion from the tedium. With the drug trade came a separate force of law and order, one that owed no allegiance to the state.

3 weeks ago, there was an armed robbery at a Casino in a nearby town. Karim Boudouda, a 27 year old of North African descent, allegedly one of the robbers, was killed in an exchange of gun fire after he opened fire on the police.

The police were forced to withdraw all the resident police, their wives and children, and replace them with elite CRS police from other departments, so seriously was the threat taken. The police station was surrounded by sandbags and barbed wire. Patrolling police wore ‘Robocop’ type headgear to protect their identity. Helicopters constantly patrol overhead. It is more like a warzone than a French city.

Only one of the suspects came from Villeneuve, the other hailed from the notorious suburb of Saint-Denis in Paris. Residents there were awoken at 2am by the sound of automatic gunfire thudding into the walls of their apartments – not the police trying to arrest someone, but fired from cars in the street in an effort to impress the neighbourhood that it was the drug dealers who controlled these streets, not the police.

There are cities in the UK that are dangerously close to the same situation. Raoul Moat represented a challenge to the police, not by himself, but by example to the many watching, waiting, foot soldiers of the underclass, which was similarly responded to with theatrical choreography. In Grenoble they have a Muslim Raoul Moat – armed with a rocket launcher.

You can build Utopia, you can provide everything the sociologists recommend, you can force fill it with a mix of characters – by age, race, assets and ability. The socialist dream just doesn’t work.

Villeneuve has shown that 40 years is its probably lifespan, after that the lowest common denominator wins.

“There are cities in the UK that are dangerously close to the same
situation. Raoul Moat represented a challenge to the police, not by
himself, but by example to the many watching, waiting, foot soldiers of the
underclass, which was similarly responded to with theatrical choreography. In
Grenoble they have a Muslim Raoul Moat

What did happen in the 1960′s? It’s almost enough to make me believe in
Devil Worship? It’s as if the whole world was run by planners and politicians
who were hell bent educationally, politically and architecturally with
deliberately replacing society with the most insidious ugly and unworkable
processes policies and buildings (or best of all all three) in the name of
“progress”. The people who built the sink estates and high rise blocks which
now have to pulled down and rebuild should be made to pay, literally and
metaphorically, for what have truly been crimes against the human
race.
Gildas the Monk

Various architecture websites have sections dealing with ‘commieblocks’,
ie the monolithic megastructures that Eastern European/Soviet/Cuban regimes
built to house/monitor their citizens. At least one of those sites includes
British municipal tower/deck blocks in the same category, since they were as
brutalist as anything the commies built during the same period, and used
precisely the same concrete panel construction methods.

Great post as always Anna, not sure what the answer is. As Mark states the
“French are not afraid to send in the riot police”, maybe water cannons in
February might help deter the Chavs etc.

Another excellent post Anna. As the situation gets worse , the solutions
are going to get more and more extreme!!!!One thing to be said in favour of
the French police is,that if the threat of violence escalates,they’re not
afraid of sending in the CRS.
Here we’d get some mealy mouthed left wing
feminist sociology graduate ( or police chief as they are more commonly known
) banging on about about how chavs and Muslim extremists are ” victims of
society” etc.

This type of thing never does and never can work!
During the past
twenty-five or so years in the UK, large areas of major cities have been
renovated, decorated refurbished, brought up to standard and generally
improved by people that care and like to live in a nice environment.
Whilst
large, modern ‘utopian dream’ new towns and estates have been trashed,
spoiled, destroyed and run down by those that know no better or do not care
about living decently.
Therefore the Government should concentrate all of
its attention on controlling and ordering the element of society referred to
in the latter case, leaving the rest of us alone to get on with our lives!

Reading that link about Hulme and its mention of Viraj Mendis brought the
memories flooding back. He was some Sri Lankan geezah who was definitely going
to be done in by the wicked Goverment if he was sent home so loads of
professional lefies and useful idiots got behind the cause of preventing his
removal. Eventually he went home and, so far as I know, nothing happened to
him. Still, the case provided inspiration to a whole new generation of
obnoxious, sanctimonious useful idiots. Where would we be without ‘em.

yup. the R4 prog touched on this. Fascinating stuff.

Ah Viraj Mendis, I remember the story well. I was living and working in
Colmbo at the time and the local media had great fun with the story. Sri
Lankan friends and colleagues marvelled at how gullible the British
were.

There is a “Villeneuve” in Toulouse. That is to say a ghetto where the
Police break off hot pursuit in case of an ambush.

Someone I know was car jacked at gun point in a petrol station off the
Periferique in Toulous in broad daylight. It was all captured on video at the
petrol station but the bastards did not care.

It was a BMW 8 series and was later used, replated in an armed bank
robbery.

The answer surely, is to ensure that the

The answer surely, is to ensure that the “Left wing revolutionaries,
architects, town planners, sociologists and psychologists” who “came together
to construct a brave new world” are forced, together with their families, to
live in their own “Utopia” for at least two generations.

I listened to this http://www.bbc.co.uk/programmes/b00t834y this afternoon and
found it interesting and informative. Treating myself to a little AR&R
after a few days away from the ‘puter I find Anna’s written on something
similar here.

(Smudd clicks away to read The Sunday Sermon, humming the theme to The
Twilight Zone).

Gloria, what a fascinating link that is – I wish I had heard the
programme, but the resume has wetted my appetite for more.

It’s available on ‘Listen Again’ for five days … although I’m not sure
if you can get that. It was fascinating – Arts Prog/Film Reviewer Mark
Kermode used to live there and was narrator for the programme: there’s one
bit where residents refer to getting used to calling up the stairwells
because the echo was different if there was anyone lurking up above;
another stair-climber describes how he fell into the habit of climbing the
stairs with his back to the wall and says he does so to this day; another
resident describes feeling that he was actually the tuning-dial on a
radio, in that the style of music changed as he moved past each and every
flat in his ‘Crescent’. I hope somehow you get to hear this prog but you
know that I’m not ‘ept’ enough to secure a copy for you!

Bloody depressing indeed. That police station sounds like something out of
‘Assault On Precinct 13′…

Anna
It is depressing but you do have to look onwards & upwards. I
was born in a relatively deprived area of Liverpool – my folks did all they
could but we still finished up living in our “Villeneuve” ( Kirkby). Still
went to school. did the exams. got work, travelled and raised family (between
us!). I just find all this stuff so depressing now -We have 9 grand-children
& 1 great-grandson (Catholic, Eh?) -what is there for them?/
Sorry for
the whinge but I do worry.
Brian

Brian, It could have been worse – Fazakerley……..Kirkby is quite smart by
comaprison.

You may say that , but I couldn’t possibly comment! I used to pass
Fazakerley every day on the bus to school (St.Eddies!) and think ‘ wished
we lived there’.
I also wish that I had your eloquence with the
keyboard -enjoy your posts so much.
Brian

It might be coming to an estate near you, wherever you are.

There are an awful lot of Villeneuve’s in France – is there a wiki entry or
something on this one you could link to?

dilettante – it is Villeneuve, Grenoble. http://fr.wikipedia.org/wiki/Villeneuve_de_Grenoble

Hope you have a translator – Google is so impressed at its own snooping
that it automatically serves everything up to me in French, no matter how
many times I change my preferences, even the Oxford English
Dictionary………

You change your preferences then you have to scroll down the page until
you get to a box that says ‘save preferences’ and click on that for them
to be saved – you also have to have cookies enabled. It took me ages to
find that out but now Google always gives me english – even when I’m
searching for something in french.

As far as I know the are 15 Villeneuve towns in France. Some3 are
better than others – at least down this part of France.

Thank-you Ivan, I have been ‘saving’ but don’t have cookies enabled,
that must be my problem. I nearly blew a fuse when I got the OED in
French!