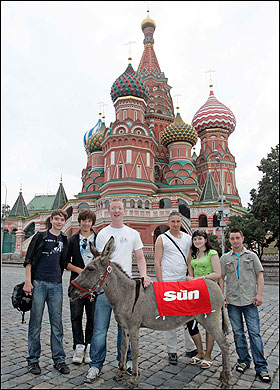 What is it with the Sun? They seem to have a thing about Asses. And things that dangle.

Last month a viral video showing an Ass strapped to a parasail dangling 150â above a southern Russian beach. Sun readers who appear to live in a permanent state of âhorrorâ, were, duly, horrified. They begged the mighty Sun to âdo summit, it cruel innit, donkeyâs aint supposed to flyâ.

The Sun swung into action; they paid the donkeyâs owners the staggering sum of 70,000 roubles and flew the hapless animal off to the Kremlin School of Riding. They flew one of their top reporters out to Russia to supervise this photo opportunity and provided the Donkey with a red blanket firmly noting him as the âSunâ donkeyâ¦

All a bit extreme you might think? Well, some of us have long memories (and some of us are indebted to Gentleman Ranters for having nudged those long memories not so many weeks ago!) You see the Sun has form where donkeys are concerned.

Back in the 80s, there was a minor flash of Ass when some Spanish animal rights activists ran an advert claiming that every year a donkey, invariably ridden by a very fat Spaniard, would be crushed to death in the annual fiesta at Villanueva.

The Daily Mail duly burroâd into the story:

This time next week Blackie the donkey will be dead. It is his misfortune to have been selected for sacrifice from hundreds of other humble burros by the men of the Spanish village of Villanueva de la Vera.

On fiesta day â next Tuesday â he will be dragged through the streets echoing to the cheers of crowds of men, women and children, with the fattest man in the village on his back.

When his legs buckle beneath him, others will leap on. Finally the gentle, patient creature will die under a ton of pounding âhumanityâ.

Too much for the Sun readers, who had somehow managed to follow the story with their stubby fingers, in a stolen copy of the Mail â they begged their Editor to intervene. He promptly flew his best reporter out to Spain to save Blackie the donkey.

Back in the UK, my dear departed Aunt, who happened to go by the surname of Blackieâ¦..was so overcome by this news that she changed her will. It still read âto my dear Niece, the sum of Â£20,000â which was extraordinarily generous of her, but now it ended âand the balance of my estate to Blackie the donkey if possible, or other donkeys cared for by the xxxxxx donkey sanctuary.

The Sunâs hotshot reporter, one Hugh Whitlow, paid a farmer to look after âBlackieâ whilst he arranged to ship him back to the xxxxxx donkey sanctuary. Being good Fleet Street men, they liked a drop or two in the evenings, especially in those days when good Spanish brandy was to be had for a handful of coins. Whilst they were imbibing, the Daily Star reporter arrived in Madrid. He tracked down the farmer that the Sun had entrusted Blackie to, and duly bought him. The Starâs headline the next day was âGotcha, The Star saves Blackieâ along with a picture of the bill of sale. The Sunâs man was distraught.

Meanwhile, back at the bar, another of Fleet Streetâs hot shots, Edward Owen â for the entire press pack were now in pursuit of the hapless Ass -had discovered that the owner of the bar now held title to the donkey after a series of sales between Spanish peasants. Owen, who spoke Spanish unlike the other reporters, managed to buy the donkey for Â£225 whilst everyone else was using sign language to order yet another drink.

Are you keeping up?

Kelvin McKenzie, on learning of this latest exchange reportedly offered Owen Â£6,000 for Blackie. Owen declined. The Sun went on to run a series of stories mocking attempts to bring Blackie to England â on the grounds that he didnât speak English and would be traumatised by the flight and the change of environment!

Not something that is bothering The Sun in their jubilation at having secured their current donkey in the Kremlin riding stables well away from other hacks, and awaiting transport back to England â where he doesnât speak the language!

Blackie did eventually make it to England and the donkey sanctuary. He died in 1993. My Aunt died in 1994. Her estate was in the region of three quarters of a million pounds. Now you know why I take such a keen interest in stories involving donkeys and the Sunâ¦â¦

Mr G christened the only two remaining donkeys in that infernal donkey sanctuary â Benny and Ficiary. If there is any justice in this world someone will take the pair of them up parasailing with a very dodgy harness.

The Sun swung into action; they paid the donkey

You have never heard of the Horse
Passport Agency, have you? Itâs a limited company.

You mean there is not a donkey DNA bureau in existence (funded by tax
payers of course) who can check this donkey is who some idiot says he is? Fuck
me our delightful and creative politicians must be slipping.

Grown men have been reduced to tears after cracking Eeyore jokes around
me, Iâll have you know. Ask Mr Gâ¦â¦..

whoops! I meant to reply to this one, given that faulksd did the
eee-ought joke (which is v.g. b.t.w.)

So when Benny and Ficiary finally shrug off their mortal coils, do you
stand to inherit the donkey sanctuary, Anna?

None of my business, really, but Iâm just curious.
Ok, nosey.

Fabian, No I donât moreâs the pity! When my Aunt made that will she had
just bought a house for

That Mr Gâs got a real flair for the comic moniker though. Eeee oughta
get âiself a nomderploom.

Any connection to Blackie & Son Limited?
My Granny had a dog of
poodle/terrier lineage with a habit of going walkabout called Blackie. He had
a thick curly black coat he wore everywhere, black shiny eyes and needle-sharp
white teeth . One day, said dog went on an extended recconaissance and a few
hours after his ETA my Granny went out looking for him. She walked down to the
local row of shops and Blackie, as happy as a dog could be, came around the
corner and cocked his leg in celebration of his dogliness. My Granny
immediately called out âBlackie, come here.â This was the mid-sixties and
Jamaican-born nurses were a rarity in the NHS: except the local District Nurse
on her rounds who bicycled round the same corner as Blackie the dog merely a
second or two after him but just in time to hear my Grannyâs demand. The
District Nurse braked to a sudden halt and proceeded to berate my entirely
innocent Granny for her rudeness. In the confusion Blackie disappeared,
removing Grannyâs alibi. Blackie was waiting at the back door when Granny
returned home. He was forgiven, just as he was when he ate the net curtains in
the front room and a handbag.

Brian,
Our side of the family is apparently Cameron-Blackieâs, but
yes, there is a connection to Blackie and sons â every school book I ever
had seemed to have Blackie already written on the cover!

Well it does look like life was never done!

Given that thereâs not much difference between individuals of the same
colour, how do we know the Sun does indeed possess âtheâ parascending donkey,
and not a ringer?

There were ugly rumours in Spain years ago that the Sun were trawling the
olive groves searching for a replica Blackieâ¦.

Iâm shocked, shocked, to think that representatives of our
esteemed meejah would ever stoop so low as to consider donkey-fraudâ¦

I think youâd be even more shocked to discover what our meejah would
do with a donkey if they thought it would get them column inches and a
by-line.

Wow, you have an extraordinary family Anna

(
I loved your Popsy history)

Lilith â they were all crazy, the lot of them. Could have been a handy
pocket primer for a trainee psychiatrist.
How I ended up sane is a
mystery to meâ¦â¦

Has the world gone mad !

Yes! I am glad someone else has noticed.

When fishes flew and forests walked and figs grew upon thorn,
Some
moment when The Moon was blood,
Then surely I was born.