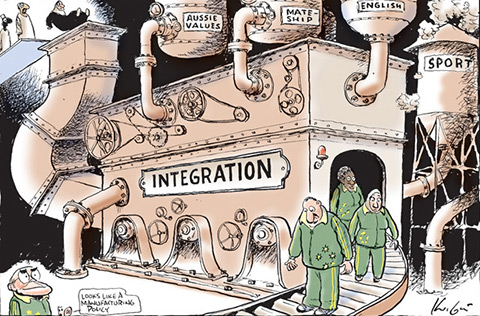 The perceived wisdom of the man in the Snug is that immigrant populations should be the ones to integrate, change their ways, learn the language, adapt to the strange food. They are but a small sector of the main population and should not demand change to accommodate their needs.

That is often easier said than done; learning a different language takes time, changing your mode of dress feels awkward, and there is surely nothing harder than giving up the comfort food of your youth.

When I first came to France, the only ‘English’ food that was available appeared on a market stall once a week. The trader was invariably late, his empty stall testament to the English lay-a-bed habit; when he did arrive, a ravenous horde would surge forward, grabbing jars of English mustard, a rarity in the land of several dozen different mustards; cheddar cheese in a country where there is a different cheese for every day of the month. All for sale at exorbitant prices.

The market stall gave way to shops in towns dominated by English owned homes, shops where an unwary ‘monsieur/dame, bonjour’ as you entered would be met with a stern ‘Good Morning’ to establish the fact that there would be none of that French nonsense in here. The shelves were lined with Atora suet, infinitely preferable to fresh suet which required that you address a French boucher; Mother’s Pride soggy white bread, and Bisto gravy granules….

Eventually the supermarkets acquired first a small section of one shelf for those English staples, then a complete aisle. Now they line the aisles with signs in French and English for those who cannot figure out that Thé is Tea, and Café – Coffee. Even the tannoy advertisements are broadcast in English and French. I suspect the French view this development with as much suspicion and resentment as the English greeted road signs in Polish.

It is, of course, market forces at play here. The market is simply doing everything it can to appeal to a large potential customer base. What happens when that customer base becomes larger than the aboriginal population? They have just found out in Flushing, New York.

The aboriginal population of Flushing is now elderly, mostly single person households. They don’t eat a lot. A single piece of chicken here, a lone meat pie there. It was no longer sufficient to support the Key Food supermarket which was the last establishment catering for their tastes. Every other shop is Asian owned and run.

The Asian shops cater for the bulk of the population of Flushing, who are just learning English, and unwilling to give up the food of their youth. They like noodles and Bok Choy. They find it easier to shop for them when the signs are in Chinese. The shop keepers oblige.

Groceries aren’t the only source of tension. Residents also complain about Chinese and Korean signs on businesses such as pharmacies and private transport services. The signs aren’t translated into English, so residents don’t know if something’s on sale or if a van might be going their way.

Now officialdom is stepping in to request that shopkeepers put up signs to identify food in English, and to stock food that is native to the elderly population who are neither sufficiently mobile to drive elsewhere, nor internet savvy to buy on-line.

Certainly in the UK, there would have been an outcry if officialdom had stepped in and demanded that private businesses translated signs into Punjabi or stocked a particular food ‘by order’.

Will there be the same outcry if it becomes necessary to protect a minority population in this way when that minority is indigenous English, or indigenous French?

Does integration mean that the minority fit in with the majority, or is it purely a matter of ‘who was here first’?

Yes, integration means you need to learn a new language, maybe a new way of
dressing also, but there was no way for me to let go my delicious french food
and french cooking while living in USA.
On this point I think we’re all the
same, when far away from ” home”, we try to comfort ourselves with our native
food.
Now that I’m back to France, I love being able to buy ” foreign” food
since I learned to appreciate differents tastes, but I would certainly protest
if I couldn’t find my native food anymore.

king bingo, perhaps it is because as a language it works better than
English?

In comments above so many examples of Polish presence in UK life. Sometimes
mentioned as opressive factor. All these invasive sausages!
But some
foreign-generated innovations were not somehow mentioned.
Like North London
Somalis gang? ( see The Times )

“Does integration mean that the minority fit in with the majority”

No, integration is when Foreigners learn the benefits of being more like
the British. this can happen when foreigners live in Britain or even in
Foreign itself, as you describe in your article about the French.

The French are most disappointing in this respect. They have had centuries
to adapt being only a few miles from the mainland. Other countries around the
world, much further away than France are adapting much quicker.

…….and why in heavens they insist on persisting with their soon to be dead
language is beyond me.

Was at Blackbushe Airfield (near Camberley in Surrey) and visited the cafe
there for breakfast. On the menu was ‘Polish Breakfast’ along with the usual
‘Full English’, Eggs on Toast, etc etc

A lot of the people where I work are from outside the UK. As a result
immigration and attitudes to it come up at lot. My line is I have NP with
people coming here as long as they pay tax, work and don’t demand we change
our ways to theirs. Learning English and integrating in other ways is clearly
in their interest but if they don’t that is their problem, not mine.

Sausages seem a good litmus test of intentions, no matter how stupid that
may sound. As an example if the Poles want to eat their own varieties, that’s
fine. If another group were to demand pork ones were banned, that is warning
that they would impose their own codes on all our other activities too…

I was in my local library the other day and I noticed a shelf of Polish
books.

If Chinese in America want to live Chinese, talk Chinese ,eat , read,dress,
smoke, educate, etc,etc,etc,etc,etc, Chinese, why did they move to
America.

They are not immigrants with that attitude they are colonists.

The same questions for any group of non-integrating colonists anywhere.

What will the world become? A collection of fragmented countries?

Like Poland occupying a big chunk of Europe and tiny chunks of nearly every
other land mass? Or France being that bit north of Spain west of Germany and
7896 other parts in other countries.
Why? What is the point? Why be a
Pakistani living a totally Pakistani life with every aspect of your life
identical with Pakistan but actually in Bradford .
Well I suppose welfare
benefits distort that example but basically Why ?

It puzzles me a great deal as a basic question but I can see how Rumania
has benefited hugely by shipping out its criminals and pickpockets to Spain
and Germany and France and the UK. It must help Poland to have so much Child
Benefit transferred from the UK every month but is this non-integrating
worldwide migration only driven by the desire to screw the host country?

Is this massive movement of humans a good thing or not ? Does it make
future wars less likely? Would France ever Nuke London its own seventh largest
city by population.

And officially everyone lives happily together with all racial dust ups
rigorously un-reported by the Press.

It’s an enormous topic that no-one will ever agree on and you either like
the shape of the future or you don’t, you hate or welcome the foreigners in
your street . Personally I would feel happier about the situation in the UK if
I thought it was fair, a level playing field but to me it looks like the
country is being taken advantage of . That rankles and the way the country
seems to care more for foreigners than the locals. Ah votes I smell there of
course.

Ain’t it good fun as a boozy Pub discussion ?

There is a deliberate ‘conspiracy’ (it’s not much of one, it’s as plain
as day what is happening) to eradicate the nation state, along with
morality, sexual identity, ethnicity, Christianity in its correct form (if
Tony Blair is a Christian, I’m a Chinaman) and everything else that has
bound different nations for centuries. Then we can all rejoice in the one
world global Utopia that will eradicate war and hunger for ever.

I just came from an American blog I write for occasionally where the
big story among contributors this morning (but not online yet) is of a
local board (council) election in Port Chester, New York State in which a
Federal Judge has intervened to order votes of Hispanic voters to be
counted several times because the white majority in the town will always
mean Hispanics (about 20% of population) are not fairly represented.

Add that to the controvesy over a gay activist judge in California
overturning the 2008 vote of Californians to ban same sex marriage. I
don’t know much about this latest development but I do know California had
same sex civil partnerships as we have in the UK but at the 2008 General
election the gay lobby pushed for a law compelling church ministers (even
Catholics but not, apparently Muslims) to perform same sex marriages or
face criminal proceedings.

Their opponents retaliated by getting a proposal banning all same sex
partnerships in the state and that was passed by a comfortable
majority.

Now the vote of the majority has been overturned because the judge
decided it denied gays their human rights. One legal opinion that will be
used in the inevitable appeal is that gays have exactly the same rights as
straights. We can’t marry someone of our own sex, they can marry someone
of the opposite sex. Amusing but I can’t see it winning the case in what
will probably be a biased hearing.

None of this is of much significance to people in the UK but it does
show throughout the developed nations there is a willingness to ignore the
fundamental principles of democracy for the sake of pandering to
minorities.

That can only lead eventually to civil unrest.

“The shelves were lined with Atora suet, infinitely preferable to fresh
suet which required that you address a French boucher; Mother

MP bread is ideal for bacon sandwiches due to its squidgeable properties.
Probably good for chip butties as well.

I think that’s because the French aren’t so good at producing a good
toast or sandwich loaf (pain de mie).

It’s a puzzle, that’s for sure! I agree that on the face of it, and in the
short term, what we see is the market doing what it does best.

But – if a nation is defined by “borders, language and culture” then having
areas that dilute two out of three, then that is certainly a threat.

Wouldn’t the Abos of New York have been Injuns, possibly of the Algonquin
lot?

PT, I’m sure I read somewhere that Celts were essentially the invention of
19th Century romantics.
Who did you have in mind?

The inhabitants of the British Isles before and during the Roman
occupation, who were pushed North and West by the the Anglo-Saxon
immigration.

Not sure. Let’s ask a Celt, or a Maori, or an Australian Aborigine, or a
native American.

I’m a Celt, English please, or German, or Italian, or Spanish for that
matter. Korean if I have to but not through choice – nothing against the
Koreans, lovely people, just the language is a bit different and needs
work.