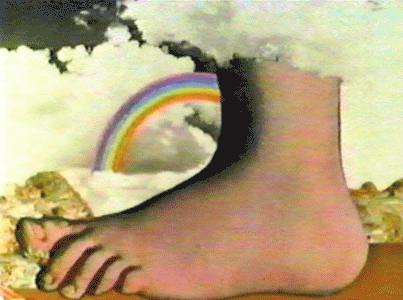 In Hereford there is a purpose built podiatric hospital. That’s a foot hospital for the benefit of those who cruise the Internet looking for any mention of paedophilia and get confused with paediatrics.

I had been in intermittent pain for some 20 years, and no one had ever figured out what was wrong. The podiatrician took one look at my foot and said – ‘that’s a fine Morton’s neuroma you have there, my girl, I can fix that’.

That was the good news; the bad news was that there was a three year waiting list for surgery, and I had now got to the point where I couldn’t even drive safely. I enquired whether it would be very expensive to have the operation privately.

Three days later I was comfortably ensconced on his operating table, cup of coffee in one hand, chatting cheerfully to him as he went about his business behind a screen shielding my foot, and we got to talking about waiting lists.

‘Why’, I asked, ‘didn’t the NHS make use of his facilities if their waiting list was so long’?

‘But they do’, he replied, ‘my first patient this morning was an NHS patient’.

According to the Guardian this morning, I had just been ‘lured’ into private medicine; it wasn’t as simple as that.

The NHS allowed him to treat just four patients a year for Morton’s neuroma, hence the waiting list. Same hospital, same surgeon, same treatment, same pool of patients. Had he not been treating private patients as well in his facility, the four patients a year that the NHS considered should have the operation would not have paid his overheads, and no one would have been treated. There was no NHS facility that could offer that operation.

The Guardian is pushing the argument that ‘those with cash can jump ahead of those in need’ as a result of Andrew Lansley’s decision to remove the cap limiting the proportion of income that hospitals can earn from private medicine; nowhere do they point out that in many cases ‘those in need’ would have nowhere to go however long they waited were it not for ‘those with cash’ supporting the private institutions.

There is some interesting language in that article. ‘Lure’ is just one word that jumped out at me. ‘Entice’ had the same effect. ‘Shopping abroad’. ‘Targeting’. I quite expected to see ‘grooming’ pop up at any moment. This is language we are more used to seeing in articles concerning paedophilia, the demon of the modern age. I suspect for much the same reason.

However, academics caution that the rush to the market could lead not to NHS trusts profiting, but to them being undercut by ruthless foreign competitors or losing patients abroad. “What’s to stop US healthcare companies coming over here to poach patients. Or GPs sending patients to India for cheap operations? Or English hospitals raiding Scotland for sick people?” said Alan Maynard, professor of health economics at the University of York.

Indeed. Hopefully there is nothing in our legislature that would prevent US healthcare companies or anyone else from offering relief to the sick. English Hospitals ‘raiding Scotland’ for their rightful property? Sick people who should be sitting waiting patiently for their allocated treatment are in some way the property of the Scottish parliament? Perish the thought that they should end up full of gratitude to some English hospital!

Papworth Hospital, home to the first successful heart transplant in the UK, will soon be submerged into the new 135-acre Cambridge Biomedical Campus. Some of its operations are so complex – with costs running into £25,000 for 10 hours of surgery – that the NHS can only afford to pay for 80 a year.

Why would a Labour government have wished to restrict Papworth to a 2% cap on that private income which has allowed it to develop techniques which result in 80 people being able to take advantage of their expertise at no cost to themselves?

I was so confused by this time that I telephoned the good Professor Maynard and asked him if he could explain to me why it was a ‘bad thing’ that Scottish patients were treated in English hospitals.

He tells me first of all that the Guardian had been somewhat selective in its use of his words. (Noooo, you mean that they just used the bits that supported their agenda? Surely not!)

What he had told the Guardian was that Lansley’s removal of the cap, in conjunction with his removal of targets for reducing waiting lists, could mean that some hospitals on the borders of Scotland, England and Wales might possibly be tempted to ‘poach patients’ in order to up their income, providing that NHS Scotland was prepared to pay for them, and that this could in turn affect the waiting lists for patients in the English hospitals. What he was calling for was for regulation to be ‘considered’ at the same time that would ensure that one lot of patients didn’t suffer at the expense of another lot.

I am slightly mollified. As mollified as my efforts to understand health economics in under two minutes allows me to be. Professor Lansley didn’t come over as quite the ‘essential Marxist’ I had been expecting after his reported comments. He certainly wasn’t railing against private medicine, and he does have a point in that whilst one can argue for a totally free market, that could possibly result in the cheapest healthcare proving to be in India.

Nothing wrong with that if you are talking about a length of steel, but healthcare is slightly more complex, and definitely more emotive; if your child has to go into hospital for a lengthy stay, it might change your belief in pure market forces to discover that the only hospitals left are the cheapest – and in Delhi. However good they are, however cheap, would you not prefer to have maintained a more local solution?

So, would someone like to explain to me the Libertarian answer to this dilemma?

Our Joint/Divided nation cannot even look after our own locally:

Although I must admit I would rather be treated in Barcelona than Blighty
(motorcycle accident on the way to the MotoGP).

Must admit to being confused as I thought you were living en France, so I
would have thought the care would have been better (and in Euros).

How come a few years back dance nuts/ravers could organise events with
thousands yet all you obviously very intelligent people just drip on
blogs.

It’s alright having boiling urine, but if you do it on someones lawn they
may notice especially with 1000 mates.

First just a typo in your third from last paragraph: it is Prof Maynard who
you thought might be the Marxist. Lansley, as we all know, is a Commissar, or
at least he is behaving like one since he has already imposed GP Commissioning
without even presenting his Health Bill to parliament.

As to your foot. From April the 18 week Referral To Treatment time is a
right in the NHS Constitution. Lansley has not abolished this right, he has
simply said that he will no longer performance test trusts on their 18-week
RTT value. In theory a patient could take a hospital to court to force them to
provide treatment within 18 weeks. It would need a lawyer to test it out, of
course.

As a fully paid up supporter of the NHS I am very relaxed about the private
sector. Private hospitals are very useful in supplying extra capacity if
waiting lists get too long. That is a good thing (although, it pushes costs up
– private health is very expensive compared to the NHS).

In fact, you’ll find that the private sector will be unlikely to take
business from NHS hospitals after Lansley’s changes because NHS care is so
much cheaper. In fact the opposite is most likely to happen – private patients
going to NHS hospitals to get high quality care for less than the existing
private hospitals. For this reason, there is likely to be some legal action
from the private sector against Lansley’s plan to raise (or abolish) the cap
(otherwise – shock! – they be forced to lower their prices).

Another thing to consider is that at the moment NHS hospitals are inspected
for quality and financial probity, and all the details are made public. This
is not the case with the private sector. Lansley’s plan is to make NHS
hospitals “social enterprises” in which case they will no longer be publicly
owned – they are private companies. Now we have a dilemma. Should they be
allowed to make their financial details and healthcare quality details private
like the private hospitals? And if not, then why doesn’t the government make
the financial details and quality records of them public too?

“… private health is very expensive compared to the NHS …”

Sorry – can’t let you get away with that one – need to see your
reference(s) for that claim. Otherwise, if unsupported, your argument all
but folds.

Indeed they are – can we get the stutter fixed on the NHS?
I have no
bojection to paying for health services. I did. I do. Actually most of us
do. Its called National Insurance contributions.
The Scandanavian system
sounds pretty much the same as the French system, and that is
excellent.
My point about it being left to purely market forces, which is
the usual Libertarian argument, and one I usually agree with, was that I
could see that health is different from other ‘products’ and that there was
an argument in favour of treatment being available locally – not from a
point of accessing that treatment, but from the point of enabling family
support where there are long illnesses. Support is a vital part of getting
better, and if the treatment is in India, I can see how it would be
difficult for all the family to pile in with bunches of grapes and cheer you
up.

“My point about it being left to purely market forces, which is the
usual Libertarian argument, and one I usually agree with, was that I could
see that health is different from other

I’m not a Libertarian, so don’t really have a problem with State being
involved in essential services like transport, water, electricity, gas,
etc.

What is wrong with paying for a professional service? I had to have a
gravestone and the engraving; Cost –