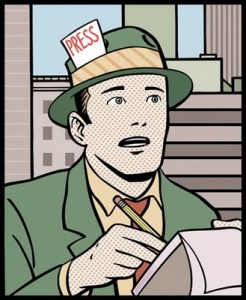 The Fourth Estate, with its continuum line from radical Grub Street through investigatory Fleet Street to compliant Canary Wharf, has no formal constitutional role, but is popularly supposed to hold Parliament and the government to account.

The Damian McBride scandal, whose bullying of any lobby journalist who stepped out of line and wrote anything other than the approved government spin was exposed by the blogger Guido Fawkes, and later, the MPs expenses scandal, exposed by the tenacity of freelance investigator Heather Brooke, exposed the utter hypocrisy of the lobby’s ability to speak ‘truth unto power’.

The Parliamentary press pack remained silent for years, only coming to life and filing stories revealing the ‘terrible strain’ they had been under, how dreadful it had all been, once a lowly blogger had disarmed and neutralised McBride.

In similar vein, the main stream media fell upon the revelations of MPs expenses like a pack of hungry vultures, not as a result of investigation from their own privileged position with direct access to MPs, but only from a safe distance once a leaked copy of the information had been fed to the Daily Telegraph, as a direct result of Heather Brookes tenacity in filing Freedom of Information requests.

The Lobby journalists are a cosy cabal, prepared to ‘write’ – if we can use that term – the spin that MPs wish to see in print, in return for a comfortable life, flying in the Prime Ministerial jet to foreign fields, wining and dining in the subsidised bars of the House of Commons and enjoying the kudos and expenses attached to being a ‘political journalist’.

So it was a surprise to discover this morning that they wished to admit outsiders to their hermetically sealed world. Had they suddenly discovered a back bone? Were they reverting to their Grub Street origins and seeking to give a chance to a struggling writer in some lonely garret? Was this an opportunity for the blogosphere?

More to the point, why? Why now? What pressure was being applied backstage to persuade them to throw a rope down to those ‘below the salt’?

The aims are to increase the diversity of reporters in House of Commons and to enhance the reporting of Parliament to Britain’s varied communities. It is organised by journalists who work in the Press Gallery and supported by the Serjeant at Arms, who is in charge of security and facilities at Westminster.

You will get a desk, security clearance and a warm welcome.

It sounds great! Has Heather Brookes already got her application is? Are we about to have real transparency in parliamentary reporting?

Who is eligible? The scheme is open to full-time reporters from a black and minority ethnic background.

Not just any old black background, but black and minority ethnic…..

Unfortunately, it is not open to freelancers […]

So, black, minority ethnic group and already employed on a newspaper….

A 2006 report revealed the extent of white, middle class, privately educated domination of the main stream media, and how incredibly difficult it was for anyone not Oxbridge educated, without the ability to survive unpaid internships, with no family contacts, to obtain employment in the industry.

A section in the report about nepotism says: “Family ties remain a powerful force in the newsroom.

There are countless examples of sons and daughters, brothers and sisters, partners and former partners who have followed in the footsteps of relatives in pursuing successful careers in journalism.

Only three or four places a year will be available, so there may be a waiting list.

Waiting list? If they can find more than three or four black minority ethnic group journalists already employed on newspapers whose editors are prepared to release them – hang on……

“Your employer will also have to pay your expenses.”

Oops! And pay their expenses whilst on secondment in central London, then I will personally eat my best hat.

Pity, I really thought this might be a genuine opportunity.

Well, I’m a journalist, a smoker, half Italian, and slightly off white.
Does that mean I’m in – or do my two minority groups amount to a majority,
especially if you add in my underclass roots. Perhaps the English white side
will always let me down … hmmmm … erm… yes, I think I might be a shade just
too white for a job reporting from the British madhouse.

If you wish to assimilate ( I suspect that you already have, what’s the
problem?), so what?

If you wish to behead the infidels, and all those that will not bow
before the sacred pasta with spicy meatballs, you know what you can do.

Apples and oranges; but to those who know no better, a reasonable
argument.

If the Gov is allowed that effectively says “No Whites” then I think pubs
should be allowed to put up signs that say “No Blacks” as well, or “No anybody
or everybody for no or every particular reason”.

EV. It’s bizarre, isn’t it, how “No Blacks” is racist, but “No Whites”
isn’t. I bet that advert had some bollocks about the House of Commons being
an equal opportunity employer in it somewhere.

I’m glad I’m not the only one. Unless something changes soon, it’s
over.

How about a sign by publicans say ‘No non-smokers’?

I’m not suprised all the MSM is nowadays is an arm of the ministry of
propaganda.
It’s why newspaper sales are plumeting ,nobody apart from the
looney Guardianistas accepts it is anything less than Propaganda.
This is
why the web scares the powerfull and the unscrupulous they wan’t to control
that too because it is far more truthfull than the MSM which should hang it’s
head in shame for the crime of complicit reporting ,well not exactly reporting
just rewriting briefs from whichever quango or party requests,(buys
advertising space), to preach the propaganda.

So we are still not going to get the truth about what goes on. How long
before they start cheating again?

I still cannot believe that they have gotten away with so much.

You can eat my best hat if you like, Anna. Make that my second best hat, or
my third best hat might be less sorely missed.

It should be said that it was not ‘fed’ to the Telegraph as much as sold.
For a lot. Not many bloggers, if any, have the financial clout to achieve
that, nor the legal infrastructure/funds to back their own stuff up.

Lovely piece though. I think your best hat is in little danger.

Parliament will always seek to restrict access to the Lobby – since
continued access is used to reward compliant hacks and barring is used to
silence the turbulent ones.

Also, ensuring that only full time existing journos are eligible means that
pressure can be applied to their parent news organisation (ig, employers) if
they become less than totally supine.