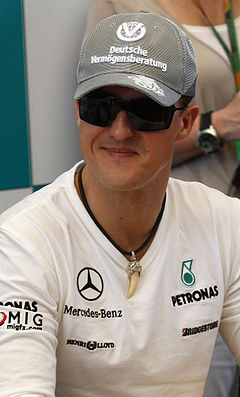 Michael Schumacher and Nigel Mansell were both on the move at the week-end.

Two men who have enjoyed the riches of Formula 1, the adulation of the world, and the good fortune to survive death and injury as a direct result of having been combatants on the race track.

Schumacher had been offered the chance to pontificate at Ferrari, to become an elder statesman and nurture future drivers from the safety of the factory and the pit lane.

It wasn’t enough. Both his ego and his personality demanded the adrenaline of the race.  He returned to the track, somewhat ignominiously. He has lost that critical advantage in eye and hand co-ordination that took him to the front of the pack and made him seven times world champion. All that is left is the pathological addiction to winning that saw him edge Barrichello to within 6” of the pit wall at 180 miles an hour in a derisory battle for 10th place.

Nigel Mansell, on the other hand, has retired from the race track with grace and decorum. He was also racing on Sunday. Cycle racing with his two sons, leading a 1,200 mile charity race across the country in an effort to raise money for the UK Youth charity.

He has harnessed his desire to lead the pack for the benefit of those less fortunate than himself. To spending time with his family.

It made me go in search of the medical requirements for a Formula 1 super licence; I wondered whether there was any exploration of a driver’s mental state before allowing him to race.

The medical, carried out by the driver’s non-specialist GP, is obsessed with cardiac fitness, evidence of epilepsy, or optical dysfunction, but the only mention of the driver’s mental health is this:

– Is there any evidence of a physical or mental condition (past or present) which could, in your opinion, prevent the applicant from holding a competition licence for motor sport?

If “Yes”, give details below.

Whereas the Doctor is expected to carry out various specific tests before giving his opinion on physical fitness, it is merely his ‘opinion’ that is required on mental fitness.

Perhaps it is time for Formula 1 to address this deficiency? Giving Schumacher a 10-place grid penalty is only putting him further back into the pack where he will be a danger to drivers with less skill than Barrichello. It doesn’t address the problem.

Sorry Anna, the Super Licence requirements you examined are for Power Boat
F1 Racing as it seems there is a requirement for an ‘immersion test’ hardly
appropriate for F1 Car Racing.

Used to be appropriate in Monaco.

Mansell is still pathologically competitive though. Won’t even give up a
compliment without a fight.

That was on the last lap – Weren’t you supposed to be asleep?

Schumacher is an evil cheating arsehole, and always has been.

Vettel is a cunt out of the same mould.

Redundant apostrophe ?  Perhaps ;  incorrect,
certainly, but perhaps she was just anticipating the

“Sorry. You are correct,” would have sufficed. This is a blog
commenting on the media; correct grammar should be the least to be
expected. Snippy comment’s to people who point this out just display
petty-mindedness.

Whilst I have a tendency towards pedantry in matters of grammar with
a particular distaste for aberrant apostrophes, once I saw the line
“Schumacher is an evil cheating arsehole, and always has been.” I found
that such a succinct, apposite and accurate description drove all
thoughts of grammatical pedantry from my mind.

Anna… now I realise the game you cunningly play, I shall happily
participate. And I really appreciate the skill with which you have
moved the tricky apostrophe in today’s comments. x

Ah! You’re too good at this game, I shall have to give you a
handicap……..

Footnote :  I wonder whether the plural of

I’m not sure that there is much sanity involved in driving at that level,
Anna.

“Nigel Mansell, on the other hand, has retired from the race track with
grace and decorum.”

He still races on occasion but doesn’t appear to suffer any delusions that
he is still a top flight driver. Got a puncture and crashed 5 laps into Le
Mans earlier this year driving in a team with his sons.

Is sanity the disqualifying mental condition?