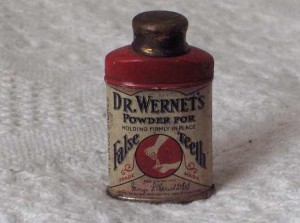 It is claimed that the false teeth, rather than being ill-fitting, were actually designed to preserve what has been described as Churchill’s ‘natural lisp’. (Nothing to do with the fact that “Fix-O-Grin” wasn’t readily available in those days, obviously).

The great man’s gnashers are being sold by Nigel Cudlipp whose father made the dentures for the wartime Prime Minister.

According to Mr Cudlipp, Churchill took to demonstrating displeasure by flicking them out of his mouth as and when the mood struck him: “My father recounted many stories of Churchill putting his thumb behind the front of the teeth and just flicking them,”  “(he) used to say he could tell how well the war effort was going by how far they went across the room and whether they hit the opposite wall.  Churchill was not a man who was renowned for his patience.”

It is suggested that only four sets of teeth were ever made for Churchill; he is believed to have been buried wearing one set, another seems to have been ‘melted down’ and the other set is in a London museum labelled “the teeth that saved the world”.

UPDATE: And they were sold for $23,750 – three times the estimate! An anonymous American bidder.

Thank you Mrs Smudd, I needed a good laugh after the recently sad blog
articles in our neighbourhood.

Regarding the “Fix-O-Grin” stuff you mentioned, I feel in my bones (and in
my dentures) that such a substance was used to an over-excessive effect by a
recent unelected, Kirkcaldy based prime minister, as amply demonstrated on
these youtube thingies:

Strangely
enough, the right wing BBC (yes I find it hard to believe) produced this
excellent video of Gordon’s best Fix-O-Grin smiling moments on Have I Got News
For You:

Fix-O-Grin helps Gordon Brown in his video to Asda mums (wot
about us Asda dads!)

Gordon
Brown’s 2008 Ramadan message (no, not a spoof) where he uses the less extreme
Fix-O-Religo-Serio-Look /a>

All of the above were genuine Brown Messages to religious groups.
I searched very hard for a similar Brown message to Christians but could find
none, no none at all. Obviously Christians are either comfortable that Gordon
loves them and need no video as proof or they are not worth his attention. The
closest was this spoof video claiming to be Labour’s Christmas
message.

By gum (as we say up north) it’s a piece with bite!

Hang on – I can be cryptic but even that’s above me!

I’d put you in the top set every time, Gildas.

Wait for the law suit when the disappointed buyer opens the parcel to
discover that Winston Churchill was was not included in the deal.

I do apologise! And sincerely hope I have started
something!
Gildas

I think it was the way you said it. It had the ring of confidence
about it.

That is very good though, however cringe-worthy! In fact, it’s so good it
deserves a plaque.

Maybe the BBC will do another variation on the ‘Cash in The Attic’
theme … Gum Buy With Me?

You don’t suppose the Americans have discovered how to clone a person from
his false teeth? This could be the answer to the war effort.

I wouldn’t put anything past them lenko. I expect they’ve already cloned
London Bridge …