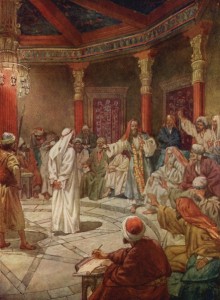 And in the tenth year of the third millenium, there was darkness in the land, and the people were sore oppressed by King Godron and his Laburites.  And they gathered to cast their lots as to who should rule over them. And it came to pass that they shouted with one voice, and bade King Godron to bugger off.  And King Godron heard their voices, and buggered off to the land of his fathers and was hardly seen again, though the people were still paying him.

And King Dav-o the Pink-and-Shiny came to the throne, and the people cried aloud “Hosannah!” — whatever that shall meaneth — and their hearts were gladdened.

But it happened that a new scourge of austerity ran rife in the land.  For the rivers of gold had been stolen away by the usurers, and their once-mighty houses of marble began to crumble, for yea, the foundations had been as quick-sand.  And the usurers wept tears as bitter as the crocodiles of the Nile, and crieth “Who shall pay for our folly?  Who shall restore us to our former glory? “

And Dav-o saith unto the nation that the rich were no longer the rich, for they were skint, and that the poor were now the new rich, and that they should pay to restore the old rich to their former place.  And the people noddeth together, and sayeth “Yeah, that sounds logical .”

But the tribes of the Laburites rent their garments and tore their hair, and wept aloud for the lost King Godron, where they had denied him thrice before, for being a useless git.  But the one-eyed one was nowhere to be seen in the West Minster, even though the common people were still paying him.  For he was at home, writing his gospel.

Then the Laburites fell to quarrelling among themselves, and did split themselves into many pieces; yea, the Harman-ites and the Mili-bandits, the Abbot-ites and the Utter-Balls-ites; and the other one who always got forgotten.  And lo! there was no one of their number who had a bloody clue.

And in the land of the beards and sandals, the tribes of the LibDem-ites too, did split, with the Cleggies being loyal to King Dav-o, for as long as it suited them.  But the High Priest Simon did whisper in their ears, yea in every sound-bite, to turn them away from Prince Cleggie, and steal power unto himself.

And even among King Dav-o’s people, there were those who did plot and scheme in the dark corners of the land, and whetted their knives while they bided their time.

And in those dark days, the land was divided, each man unto himself.  (Women too, though they counted not.)  And all was murmurings and mutterings and grumblings and mumblings, and the press and TV went on and on about it for bloody ever.

And all throughout the nation, there was woe, woe and thrice woe.

Truly your scripture is well crafted. And is indeed most pleasing unto the
Great Parrot himself.

Yeah, verily, I like the style. And comments there shall be. And the
comments shall not be one in number, but more than one; and one shall not be
the number of the comments; for one comment there shall not be, nor two
probably. For in agreeing, those who did comment speke the Word of the
Lord.
And David Davis looked upon the Word, and he saw that it was good.

We might have to break out the Holy Hand Grenade of Antioch.

Verily I say unto ye: to those who had garnered great riches and lost them,
I shall even pay ye with tithings upon the poor and blameless. To those who
had bugger all in the first place, ye are all in it together and shall have
less. Welcome thou mutlitudes to the land of King Dav-o and his vizier Clegg
of the over-leg, where Custodians of the law now patrol the streets clad like
unto frogs and put to death the arguers and malcontents who offend the great
and mighty. And the people saw this and did tremble at the thought of that
which is yet to come.