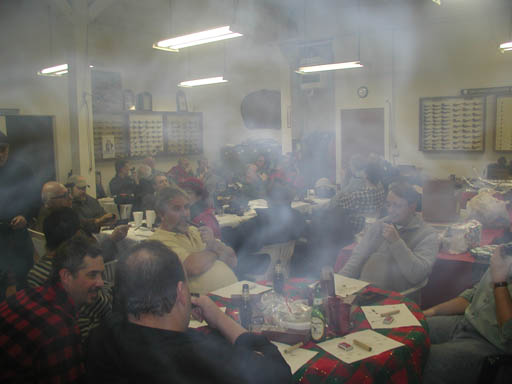 Years ago, Uncle Tom Cobbley would take off down to the local public house after his supper to enjoy his pipe and a conversation with the other allotment holders without having to mind his language in front of the ladies.

The public house was the poor manâs version of the ladies âwithdrawing roomâ; a haven of strong drink, stronger language and thick smoke that âer indoorsâ didnât choose to host in her front parlour.

Feminism broke through this barrier and ensured that the ladies were just as likely to be found propping up the bar now that they had a dishwasher and an electric iron and an abortion instead of another four toddlers to watch over.

The public house became a sanitised âgastro-pubâ so that Madame no longer had to return home to prepare the supper. Then it added a âchildrenâs roomâ so that she didnât have to wait for the few children she had exercised her âuman rightâ to produce to grow up before she could enjoy her equal rights.

Before too long it was literally a home from home with a juke box, and a TV and comfy sofaâs to replace the bar stool. Now that it resembled Madameâs front parlour, she complained that she didnât like the thick smoke, nor the strong language.

Air conditioning was installed, but it wasnât enough, so the smoking was banned, and the strong language disproved of.

Unfortunately, this had removed two of the reasons for the public houseâs very existence, so they went out of business at a rate of knots, some 60 a week to be precise.

What do you do with an ex-public house? It used to be extremely hard to achieve a precious âchange of useâ certificate. The public house was the âheart of the communityâ or at least the heart of the smoking/drinking/chatting community.

How very fitting then, that the Colgrave Arms in Leytonstone, is to become the heart of the local righteous community.

In doing so, it will no longer be open to the ladies to sup their pint of equality beer, nor to discuss their latest abortion. Nor to have their supper cooked for them, nor to watch Eastenders on the wide screen TV. In future they will have to stay at home.

It is to become a mosque.

As Hilaire Belloc wroteâ¦ âWhen you have lost your inns drown your empty selves, for you will have lost the last of England!â

I can foresee the day when Britain will be famous for having a ârighteous community centreâ at the end of every street.

So many pubs to renameâ¦â¦see what suggestions you can come up with.

(Try not to make them libellous, I donât want to have to delete any!)

The Crown and Ankara. No âJewâk box though.

The Artificial Arms
(Prop. A. Hamza)

A. Hamza once came to such harm
He now has just part of each
arm:
His hook-clawed prostheses
Are hideous pieces
Which add not
one jot to his charm.

Has the fatwah lady sung now?

Iâve hadith up to here..

All much too clever for me. But very funny.

This gives me hope that England is safe â !!! Just off for a glass of
Chablis down at Aliâs Axe Bar

Iâm pretty sure I cannot, but nonetheless I will try to attribute â¦
Give
me a mo [or a night]

The Non-white Caliphs of Dover

Right everyone sing-song time (with Captain Hook on the pianner):

Knees Up Mullah Brown
The Old Iron Crescent
Show Me The Way To Bomb
Home
Weâll Meet Again (with 24 virgins. Each!!)
Ayatollah Got No Money
(except benefits paid by a grateful British public)
On Mullah Kellyâs
Doorstep

This sounds like a good old sing-song down Koranation Street, maybe.

Brilliant! I was thinking the Ali Bar One on Finsbury Pavement in
Moorgateâ¦.

Gloria â I give in! You win by a mile. (Wanders off singing, âIf I
had a Hamasâ¦â)

Or, âIf I hajib a hammerâ

We seem to be putting together the programme for an old-fashioned
Sangin/Dance Act.

or maybe the music should just be good olâ Raccoon Roll.

Anna should be proud, her readers have put forward some wonderful
suggestions. Not one is Shiâite.

Whatever you do- donât suggest you get stoned â might have some unexpected
consequences!
G the Monk

I like a djin and tonic, or anything as long as itâs allahcoholic, when I
drink at the Bar-Mitzvah.
Er, hang on â shum mishtake here, surelyâ¦

bit of a change from churches becoming Wetherspoons!

circumcision , spelling someone gave me a tip

The Cadillac and Koran ?

And Mecca half last the evening.

.. while the ladies sip Tia Shariaâ¦

The Kaa Bar. The Minbar.

Poor, poor England..
Anyway,
Donât know about the name, but I know
what I want on the jukebox –
âThey tried to make me go to Jihad, I said no!
no! no!â
Gildas the Monk

Were crusades not a second Millennium affair and were you not very much a
first millennium guy.

Yeah, but I kinda hung around for the fun!

The World is just a great big Onion Dome.

The Kingâs Head of course, on a plate, when we finally get Sharia Law.

The Profit.
The Stone Circle.
The Shalla Inn.

By the way, how does a dishwasher, electric iron and ONE abortion prevent
avoid having four toddlers?

The abortion only prevents one toddler, you hit the husband over the head
with the electric iron and replace him with the dishwasherâ¦â¦that takes care
of the rest.

Clever! Took me a moâ, but worth the effort.

The Abolition Inn. I canât see that one lasting long.

The Suicide Bombers Arms. (Itâs all we could find of him)

David Davisâs pub could become the Shoe Thrower and Flogger.