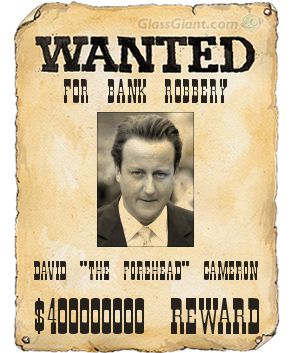 Mrs Thatcher’s words, almost always taken out of context, inspired me when I read of David Cameron’s latest project. Mrs Thatcher was, of course, completely correct: there is no such thing as society, only the individuals, families and other voluntary groupings that people may define themselves by.

Mr Cameron, as many other social democrats are wont to do, is trying to disprove her words by subverting a reference to her famous quotation.

There are so many, many things that are wrong-headed about “the Big Society” that I hardly know where to start. There is an article outlining a leaked announcement (remember those? They weren’t supposed to be happening any more!) at City AM:

THE Prime Minister will today announce plans to fund charitable projects using hundreds of millions of pounds that is lying dormant in unclaimed bank accounts.

In one sentence, one simple sentence, an entire universe of self-righteous complacency is laid bare:

David Cameron will detail proposals to siphon off money from accounts that haven’t been used in the last 15 years or more, and use the cash to fund schemes in the voluntary sector.

I’m sure I’ve got bank accounts lying around that haven’t been touched for fifteen years, probably because they only have pennies in them. That still doesn’t mean that the Prime Minister is allowed to steal these paltry sums from me, does it?

A new wholesale bank will be responsible for doling out the money – thought to total up to £400m – to charities and other voluntary organisations that apply for grants.

Oh, my word! So the favoured few who have the ear of unelected quangocrats in this new wholesale bank will be given money entirely unlawfully taken from frugal people and be allowed to squander it on anything that takes their fancy, will they?

I cannot believe the bare-faced effrontery of this poltroon! And yet, around the country, people are quietly nodding to themselves at what a good idea this theft will be!

Cameron is hoping the scheme, which will be announced at a speech in Liverpool later today, will prove that his plans for a “Big Society” have not been put on ice in the face of the tightest spending squeeze in Britain’s peacetime history.

Mr Cameron is clearly no different than his predecessor in believing that the omniscient state is wiser at spending our savings than we are. The only difference was that even Gordon brown did not have the temerity to baldly steal money out of our bank accounts to fund his pet projects.

Is there even a banana republic dictator that would steal so shamelessly?

Is this where those Nigerians got the idea for the 916 scam?

I take a charitable view here and assume there is method in Cameron’s
madness. I suspect that “Big Society” is a ploy to wean the British off the
nanny state or at least prepare some ground ready for when austerity becomes a
fact and public services are a shadow of what they are now (apart from the
NHS, which we know is going to become a completely different animal, although
eventual incorporation into the “Big Society” is plausible). This “Big
Society” is potentially a radical rethink on how we provide for ourselves that
what we currently expect local and central government to provide for us now.
The clue is the setting up of trained local organizers who when the crunch
comes can step in to mobilize the local population to enable them to be able
to be self reliant and fend for themselves albeit it in local collectives.
Like most of the new government’s policies they are bold and radical and
designed to return better standards and values to society and to balance the
countries books and restore competitiveness. Certainly “Big State” Labour
(socialist) style has not worked and in fact brought the the UK to a point
where it is socially and economically nearly bankrupt. In the absence of any
other constructive solutions it is better to give “Big Society” some
support.

Some people might be underestimating the ability of the self-righteous to
push on with ideas that from the beginning are unworkable. It smells like the
new managements putting their stamp on.

When this ‘Big Society’ guff was first mooted during the General Election
campaigning, for me it set off some alarm bells, since the One Big Idea that
is certainly coming our way is the Civic Society – which is a dog’s breakfast
of half-baked Fabian neo-Marxist claptrap from the stinking stables of Gramsci
and Foucault. This is the Big Idea behind domestic policy here and in the
States, France and pretty well everywhere else. People – these politicians are
poison. Politicos like Cameron, Obama, Merkel, Sarkozy et alia are hell-bent
on imposing this Fabian model – usually by stealth, using the well-worn good
Hegelian cop-bad cop method (aka Labour-Conservative).

Surely money doesn’t lie unused in a ‘dormant’ bank account, just as it
doesn’t lie in an ‘active’ account, it is lent out to other people. In other
words there is no pile of ‘unused’ money.

On a related topic; why are some banks so against ‘dormant’ accounts? It
must cost far more to chase after ‘rate tarts. Personally I would love to have
an account where I could put away ‘rainy day’ money knowing that it was safe,
not losing value and earning a decent, if not necessarily the best, rate of
interest.

“On a related topic; why are some banks so against

I seem to remember the GB plan was not to ‘take’ the money but merely to
‘borrow’ it for an indefinite period.

The money would be collected from dormant accounts and spent, and whenever
anyone put in a claim for their own dosh they get reimbursed by the Government
(taxpayer). What they are banking on is inertia with respect to people
checking old accounts. They can spend a lump sum now with a big fanfare and
pay it back in dribs and drabs.

Although to me it is tantamount to theft, the Government doesn’t intend to
deprive us of these pennies as they are likely to be repayable on demand, so
probably isn’t theft as the law would see it.(Though a jury might
disagree!)

A question that needs answering: If I have money in a dormant account it
attracts interest. If the Gov. takes that money and I later claim it back will
it reimburse the cash *and* the lost interest that should have been building
up?

With some experience, little of it good, I have cause for concern on the
competencies and motivations of those funded by the public purse to take more
money from them and then assess who is worthy to get what’s been taken,
especially after a nice cut for ‘expenses’.

We don’t actually have the details yet, do we?

But whether it’s as described or not, no way will it realise a take of

Perhaps Mr Cameron is relying on a transatlantic precedent for his
authority to commit this theft:
“When the President does it, that means it
is not illegal.”
Richard M. Nixon

Will any attempt be made to find out if someone living is entitled to this
money? Like grandchildren and such. Just because they don’t know about it
doesn’t give the government the right to spend it.

I believe the criteria is that the client has been uncontactable for 15
years, and that the bank will have to have made reasonable endeavours to
contact them.

I think T J W is right. But then on the other hand I know I have about
67p in an old student account registered to a student house from more than
15 years ago, I don’t mind the government stealing that, I’m more worried
about the thousands from my pay packet every month.

Indeed, it’s stealing from us in order to give to the state’s mates. Can’t
have the public doing what it wants with its own money, now can we?

Actually Gordon Brown proposed exactly that and a social investment bank to
fund community projects to boot; this is actually a fair amount of rehashed
labour policy…

Ah, Jules, but Gordon Brown never actually did this. I fear that
Cameron actually will do this.

I doubt it. GB never did it because it’s an administrative and legal
minefield. Eleanor’s point, below, illustrates one of the pitfalls: the
time and effort (=money) it takes to be certain that there is no residual
claimant makes it a non-starter.

Equally, an attempt to enact legislation designed to expropriate
dormant accounts would probably hit the buffers amongst howls of protest –
echoing the indignation expressed in your piece.

If somebody with the overarching sense of entitlement of Gordon Brown
abandons a plan, you can be confident that the game isn’t worth the
candle.