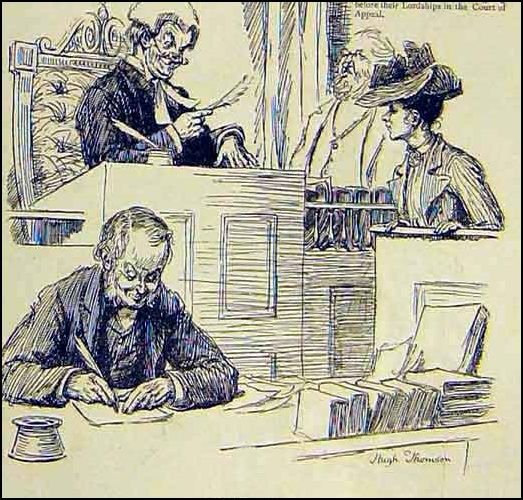 It was dark and stormy night in 1726. Tobias Muddlestick bent over the leather bound ledger, dipped his quill in the ink, and carefully inscribed the words ‘Received 6d’. He paused over the words heading the column ‘Payee’, and after a moment’s thought, he wrote ‘unknown’. There was no column for address.

Thus was immortalised the zygote of the ‘Big Society’.

T’was true, he had no idea of the payee, but the 6d handed over to him for safekeeping must be accounted for, and so it was, in a ledger marked ‘unclaimed balances’.

Other clerks came along after Tobias, their names changed to reflect the passage of fashion, but the columns in the ledger never changed. The 6d became shillings, the shillings turned into florins, the florins into crowns.

A house repossessed here, the owner long since fled ahead of the bailiffs was sold for more than the debt; a tardy solicitor dutifully adding interest to a claim long since paid and the beneficiary departed for greener pastures; mistakes in the court funds office owned up to belatedly and funds advanced to a now dormant account; the ledger grew and grew.

The office was set up to counter the speculative activities of some of the Masters of the Court who together with the Usher of the Court had previously been entrusted with monies lodged into court. It transpired that some of the Masters had been using the money to make dubious investments for their own benefit and sustained heavy losses to the money belonging to litigants and patients, and so it was ordered that all the money be boxed up and sent to the Bank of England for safekeeping. The role of the Accountant General was to act as bookkeeper to keep track of the funds held by the Bank.

For 200 years the Ledger grew and grew. Dust settled over the office, the clerks grew older and greyer; the quill pens turned into Parker pens, then into the new fangled Biro’s, but still no one questioned the headings on the columns.

Until one day Tony Blair bounced into view. ‘We shall sweep clean with a new broom’ he exclaimed, ‘we shall look into every nook and cranny of government and examine its worth’. Thus was born the Quinquennial Review.

Ann Chant OBE was picked to head the review of the Public Trust Office. She had recently presided over the implosion of the Child Support Agency, though whether the ability to now recognise chaos when she saw it was the decisive factor in her appointment is not known. She stalked the corridors of the Public Trustee’s domain, blowing cobwebs from corners not seen since Mafeking.

‘What do you do, what is your function’ she cried.

‘Why, ‘tis to properly account for the money of people who cannot be trusted to do it for themselves’ they replied in unison.

As she dodged the tea trolleys in the corridors, with their cheerful ‘ting-a-ling’ and supply of digestive biscuits, she found herself outside the door of ‘Unclaimed Balances’. ‘Good morning gentlemen, sorry to disturb you’ she said as their aged heads lifted ever so imperceptibly from the mahogany desks.

‘What do you do, what is your function’ she begged once more.

‘Why, ‘tis to properly account for the money of people who cannot be trusted to do it for themselves’ they replied in unison.

‘Can I see your work’ she said. And they lifted a heavy ledger from the dusty counter and handed it to her. ‘Who does this money belong to, there is no name’ she queried. ‘We don’t have a column for name, never have done, we just account for the money and add it up, that is our function’ they replied.

‘What does it add up to’ she said.

‘£33 million give or take a sixpence or two. But Ma’am, we look after around £2.47 billion every year and we’ve only lost track of £33million in 200 years they whispered. Petrified.

The discovery of that £33 million, and the knowledge that it could neither be given back to its owners, nor spent by the new government set in motion a chain of events.

There was not a computer in the building. The Public Trustee’s first audited accounts were not published until 6 years later. They still couldn’t say who the money belonged to. How could they? No one had ever asked them to write that down. They had no names, no addresses. The Public Accounts Committee concluded:

“Public bodies that manage or regulate their clients’ money, especially for people disadvantaged through mental incapacity, must meet the highest professional standards. The Public Trust Office fell below those standards. […] As custodians of monies paid into Court, the Court Funds Office should have established systems which permitted the ready identification of balances owed on individual unclaimed cases, and the regular agreement of these balances in aggregate to the total of unclaimed funds held by the Office. The latter is an important financial control over the completeness of funds and a deterrent to misappropriation.

The Agency indicated that it did not consider tracing owners of sums held on the Unclaimed Balances Account to be a proper use of its resources.”

The Chief Executive and current Accountant-General, one Julia Lomas, ‘left the building’.  Permanently. In circumstances which caused some disquiet in the sleepy corridors. The undoubted fact that she had presided over a system of managing money that left no one any the wiser as to who some of it belonged to or where it should be going had not affected her performance bonus. In December 1999, she had been paid the maximum performance bonus of £24,300 and a lump sum of £38,700 to cover the six months of her contract which had been prematurely terminated. A figure which was supposedly the subject of a confidentiality clause, but which was apparently available to the Daily Telegraph.

“When officials were asked why they had paid the maximum bonus to the head of an agency criticised for its “below standard” management, they said Miss Lomas’s record was not so bad that they felt able to dismiss her, and that they wanted to make an offer which would mean that she left by mutual consent.”

Nine years later, Ms Lomas popped up as a partner in the firm of Irwin Mitchell, now handling the financial affairs for hundreds of people unable to competently handle their own affairs, and felt empowered to comment on the ability of the Public Trust Office, now renamed the Office of the Public Guardian, to cope adequately with the art of writing things down in a timely and orderly fashion:

Julia Lomas, a partner at Irwin Mitchell, said: “The OPG has been let down by senior civil servants and politicians who underestimated the impact of the work involved.

“Paperwork has trebled and fees have doubled. It is hardly surprising that there is such backlog.”

The strange tale of the £33 million that ‘couldn’t be spent’ was to lead directly to the Dormant Bank and Building Society Accounts Act., for by then it had been realised that there were, in fact, pools of money and ‘orphan assets’ all over the country which were sitting in dusty ledgers. Technical difficulties in drafting the Act meant that unclaimed shares could not be included. The banks were not keen on giving up their orphan assets – they pay no interest on them, and yet are free to invest them.

Fair play demanded that the true owners of this bounty should be able to reclaim it if they could prove entitlement, so for a while firms of solicitors across the country were advertising ‘we may have information to your advantage’ and taking a cut out of the funds reclaimed as they dealt with the bureaucracy involved in proving entitlement.

Just think, there would have been no ‘Big Society’ if 200 years ago someone had demanded that Tobias Muddlestick had started a column headed ‘who this money belongs to’…..

Oh My. This is going to cause a ruckus. I hope. Who can I bombard with
Emails?

If its thought this government might enjoy a windfall of

Thank you for completing the mylostaccount online form.

Your enquiry will be dealt with by the following organisation/s in the
coming weeks:

To carry out a full check of all the institutions listed may take up to 12
weeks.

We use this email address for outgoing emails only, so please do not
reply
to it.

Still say this is theft.

300 million is a pimple on a pig’s backside when compared to the interest
the UK is paying on its debt, around 20 million a day.

If the previous lot hadn’t been so useless (not that I hold out any hope
for the ‘new’ lot, either), the Gov would only have needed to wait 15 days and
then they would not have needed to steal from the dead, diseased or mentally
defective.

See the LPUK blog for the TSB fiasco

Scorching!
I have recently crossed swords, so to speak, with the Public
Trustee’s office in the context of a carer who wished to take out a Power of
Attorney for her mentally disabled charge. Whilst there need to be checks in
such a situation, it wasnt that which was the problem. just the slow
bureaucracy and the expense. Essentially, my client was being taxed hundreds
of pounds for taking on responsibility.
Gildas the Monk