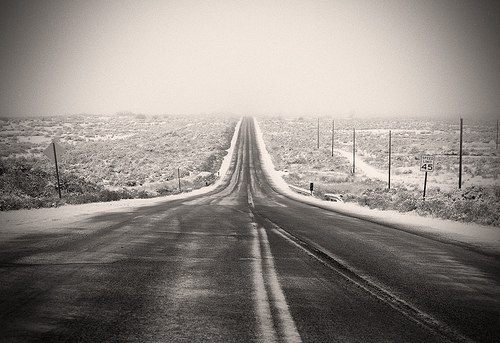 Feelin’ okay this mornin’
And you know,
We’re on the road to paradise
Here we go, here we go

As it does so very often manage to do, the issue of road pricing has come around once again. And, as a libertarian, I am certainly not averse to duly forking out a couple of quid to cross the Dartford crossing or quite a few more quid to use the M6 Tollway or even the 50p necessary to cross the whimsical Whitney toll bridge in Herefordshire.

But it is actually quite interesting to contrast these three different toll systems.

The Dartford Bridge was ostensibly tolled to pay for the cost of its construction, which, frankly, is fair enough. But the construction has been paid for now, at least once. And yet it remains tolled and the prices are creeping gently north, as ever.

The M6 Tollway is quite a different kettle of fish. Fast, well-surfaced and blissfully free of traffic, I’m not entirely sure it will ever pay for itself. There are just too many feasible alternatives and far too few people hate traffic enough to part with such an extraordinary sum of money to avoid being stuck in a God awful traffic jam. So the prices are not creeping up, they are positively leaping up to a point where anybody who can’t expense the toll will rather rat-run around it or grin and bear the horror of the original M6.

And then there is the extraordinary Whitney toll bridge. To be fair, not the only whimsical toll I’ve seen, but it’s one of the most agreeable. It costs the princely sum of 50 pence a day (for a car). If you keep your receipt, you can go back and forth across it all day long. It’s pretty much in the middle of nowhere and yet it’s busy enough because there’s always what passes for a traffic jam there (two cars and a tractor, each way!) It must be generating a decent income for the owner, or he wouldn’t be there all day when the River Wye and a fishing rod beckon.

The contrast couldn’t be more marked between a centuries-old toll and the modern tolls.

The modern tolls smack of corporate greed, with the operators at Dartford extorting way more than their fair share having sold the idea with a lie.

The M6 has all the hallmarks of central planning, with years taken and millions spent. Within months it was being repaired despite the fact that almost no-one uses it. And the relief of the M6 simply hasn’t happened, because the price is not set on what the market will bear, but what the government decrees.

And then there’s the Whitney toll. Cheap as chips and your contribution will get you back and forth all day long.

I know which model I’d support if they ever decided to go for road charging.

But, of course, we won’t have the option, will we? The fear I have of road charging is that it will not be “instead of”, it will be “as well as”.

And it wouldn’t be as simple as putting 50p in a box – it would be an insanely complex and intrusive system that required the monitoring of your car’s movements at all times so that you could be charged appropriately. And fined automatically for speeding. And your movements recorded.

Which is why I’m happy to let the libertarian idea of road charging get kicked into the long grass yet again.

For a moment I thought you were referring to a quaint old toll bridge near
Witney, Oxon which used to charge 2 pence a trip in the 1990s.

I lived near Witney in the 90s and this Swinford Toll Bridge was an
essential crossing for certain types of trip in the area. They charged 2p
(yes, two pence) per crossing. It was a tiny, ancient bridge and was privately
owned. You would get to recognise the diffeent members of the owner’s family
who took the tolls. You wondered if the teenage lad who sometimes manned the
toll booth might be collecting all of these 2 pences for his pocket money. I
was well cheesed off when they raised the toll to 5p. It wasn’t the increase
of 3p that hurt , but the inconvenience of replacing the large pile of 2p
pieces in my car with 5p pieces.

Of course, being run by a family who probably enjoyed an evening together,
they didn’t man it late at night, so you could cross it back and forth,
enjoying the feeling of 2 pence you were saving each time, … well you wouldn’t
I suppose.

It was built in 1767 and has its own act of Parliament which established
the rights and duties for the private owner, which still run to this day,
including the income being tax-free and the obligation on the owner to keep
the bridge in good repair at his own expense. There are an estimated 10,000
vehicles a day which cross it at 5p per car and 50p per lorry.

Some think the income could be a tax-free

The Dartford crossing has just had a three hour jam caused by the toll
gates and the weight of traffic. Not very nice in blinding heat.

How have the French managed to build their “Peage” roads, most of which are
well maintained and free of traffic? I never mind paying to use them, as they
are value for money.
Is there a dark side to these roads (like compulsory
land purchase, planning freedoms, EU grants, etc.)?
It’s interesting that
Brittany (says Eleanor above) have resisted tolls, but have they
consequentially forfeited having these new roads?

Where’s your evidence of that Jabba? Time you did a wee bit of research
about the Skye bridge I think.

The present Scottish government did away with all bridge tolls in Scotland.
The bridges had already paid for themselves quite a few times. Traffic now
moves far more freely.

We subsidise a lot of your public expenditure north of the border.

The Scots threatened rebellion, UDI & all manner of terrorist actions
& civil disobedience, but did succeed in getting the Skye bridge
de-tolled.

Maybe the Kent & Essex mobs should do similar for the Dartford
Crossing.

The problem is the feckless Scots want us(the English) to pick up the tab
for such expenditures.

Also, have you noticed how the queues at the Dartford crossing toll
booths are longer since the toll was increased?

Brittany was legally decreed Toll Free several hundred years ago.
The
French Government would try to change that in fear of their lives.
I do so
love The Bretons. Strikes are a National Pastime, and the entire population
supports every single one.