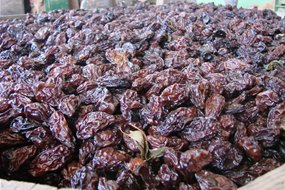 My sister-in-law once famously arrived here for a weekâs holiday with six packs of Waitrose prunes in her luggage.

She has never lived it down â this part of the Dordogne is bang in the centre of the world wide prune industry â we are even host to the one and only prune museum in the world.

We donât eat prunes because we really, really, like prunes, we eat them because weâve got millions of the damn things and plums are one of the fairly limited range of edible things that like growing in stony, limey soil.

My sister-in-law, on the other hand, has no such excuse for eating them; she doesnât really, really, like them either. She just believes that terrible events will occur inside her colon should she neglect to consume her daily dose of Waitrose prunes. Especially should she have the misfortune to be consuming âforeign foodâ at the same time. Apparently the entire apparatus will turn to stone and have to be removed and replaced by a biodegradable Waitrose colostomy bag or something.

I understand people consume the dried chicken food commonly known as All-Bran for a similar reason. The English shops stock All-Bran specifically for those who have grown up believing that what goes in wonât come out without the aid of dried pellets of the surplus bran left over from making white bread for those who prefer itâ¦â¦

A generation of Dordogne farmers could not be imbued with the same fear of a pruneless future, to them, a pruneless future is on a par with a lottery win â so the marketing men came up with a different slogan for them. Pro-biotic yoghourt. They eat it by the bucket load in these parts, consumed by fear that their colon will congeal into an immobile mass. We donât have many cows here, so we dutifully consume the surplus fermented cow milk from other areas, in an effort to be âregularâ.

So much fear, engendered to shift the surplus product of one area to another. It is a reverse engineered fear, the fear of what will happen to you if you ever stop consuming the product.

Back in 2006, the EU decided to look into some of the claims made to terrorise us into eating a particular food, and decided to establish a board to look into the âhealth giving propertiesâ behind the advertising slogans.

Ioannis Misopoulos, of the International Probiotics Association believes that the industry â by which he means the industry of getting you to consume fermented cowâs milk â will go âto the wallâ with massive job losses.

Or in other words, a load of old cobblers.

As were the marketing claims of a stunning 80% of the first 900 claims evaluated by the European Food Safety Authority.

The marketing men are just going to have to try harder.

In order to sell a pack of dried calories marketed as a tasty âweight lossâ milkshake, the pack must contain less than 250 calories.

In order to bear the claims, a food should contain a maximum of 250 kcal/serving and comply with specifications laid down in Directive 96/8/EC in relation to food products under Article 1 (2b) of that Directive. In order to achieve the claimed effect, one or two meals should be substituted with meal replacements daily. The target population is overweight subjects in the general population who wish to maintain their body weight after significant weight loss.

Perhaps we can sell our prunes in packs containing less than 250 calories each as a weight loss product? Substitute one or two meals a day with these bags of prunes and keep the lard off your hips on a âregularâ basisâ¦..

Ah, so this is why I canât move for Prunes around here.

Mind you, The Bretons do a mean Prune Cake, but they mostly soak The Prunes
in Eau de Vie first. Believe me, it makes a difference.

But what are the marketing guys going to do about the immense and
unstoppable over-production of bullshit?

I mean, there are piles and piles of the stuff everywhere you look (piles
being what you get if you donât eat your prunes). Bullshit falls out of your
newpaper when you open it. You can see the stuff on every TV channel, hear it
sizzling and steaming on the radio.

But you can walk the countryside for weeks without actually seeing a bull.

Once upon a time âOld pruneâ was a term of affection and endearment.

Would a mouthful of a deep-fried Eccles Cake count as a weight loss
product?
Complete sacrilege in my humble opinion as the food of the gods is
an Eccles Cake from Martinâs Bakers in Chorlton-cum-Hardy straight out of the
oven. Sheer bliss that knocks madeleines into a cocked hat for me.