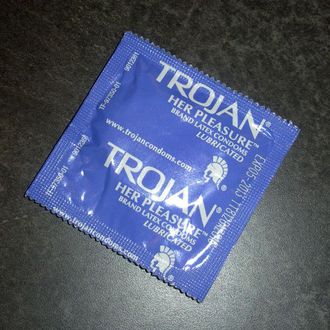 Is an hour too long to wait in an emergency? Can passion survive the wait?

In an age when the Pizzeria guarantees your appetite will be sated within ten minutes of your call, I wonder at the mode of transport employed by the latest emergency service.

The Swiss government has just started âVelopostaleâ in Geneva, Bern and Zurich, to deliver that essential condom when your passionate embrace is halted by the realisation that no one brought the condoms.

They will deliver them by bicycle. They guarantee within an hour.

They even have a snappy slogan â âwe come before you comeâ.

I can only assume that no one suffers from premature ejaculation in Switzerland.

So, itâs clearly not just chocolates and cuckoo clocks, eh?

Dear Obnoxio,
Do you think they might extend the service to
delivering, say, a fish â with which one might pleasure oneself?

Gildas, I like your thinking! Thereâs a huge potential untapped market
there.

If they do introduce this idea, I may be compelled to emigrate!

I notice that the Trojan wrapper says âher pleasureâ
Excuse me but I
quite enjoy it aswell !

No ulterior motive from a government. Not one in ten punctured
secretely.
All governments want population so would you trust them?

Theyâve been at this for a while. Here is a piece from five years ago (you
may have to click to close a very irritating pop-up advert across the middle
of the article):

Note the 30-minute promise, and the recommendation that you use this time
for foreplay and a glass of bubbly.

I am surprised that any Swiss would be so disorganised as not to have
condoms always with them, just in case.

So this Swiss slogan is in English?

So if this kind of service is popular in Switzerland, does that mean the
following ingenious business plans could make me rich there?

Canât think of anything else. Can anyone lend me a few hundred grand to
start these up please? Youâll get 49% of the profit. Come on, itâs sure
thing.

* I refer to PMT. The hubby needs a thick fluffy towel to wrap around his
head to avoid the increased nagging.

If it was me, theyâd probably be OK sending them by second class post these
days!
Still, at least I have an icon â Thanks Anna (I didnt want to bother
you with that)
Gildas the Monk

I thought you ancient Christian monks werenât keen on icons on the
grounds that they were the preferred idolatry of your recently schismed off
rivals, the Orthodox Church.

Nice picture thingy by the way.

Thanks Mr D
As I recall, we didnt really have a schism with the
Orthodox Church in the east until the 10th/11th century, but anyway, we
didnât have an issue with the graven issue image as it were. That was more
a Reformation thing really.
We quite liked our stone work, although the
earliest manifestation of artwork was poetry, and later, rather cool
caligraphy!
I quite liked this one because as the sculpture said, this
was my best side, and the lighting was good.
Yours ever
Gildas the
Monk

Anna, living in France, you should be used to seeing French letters
delivered!